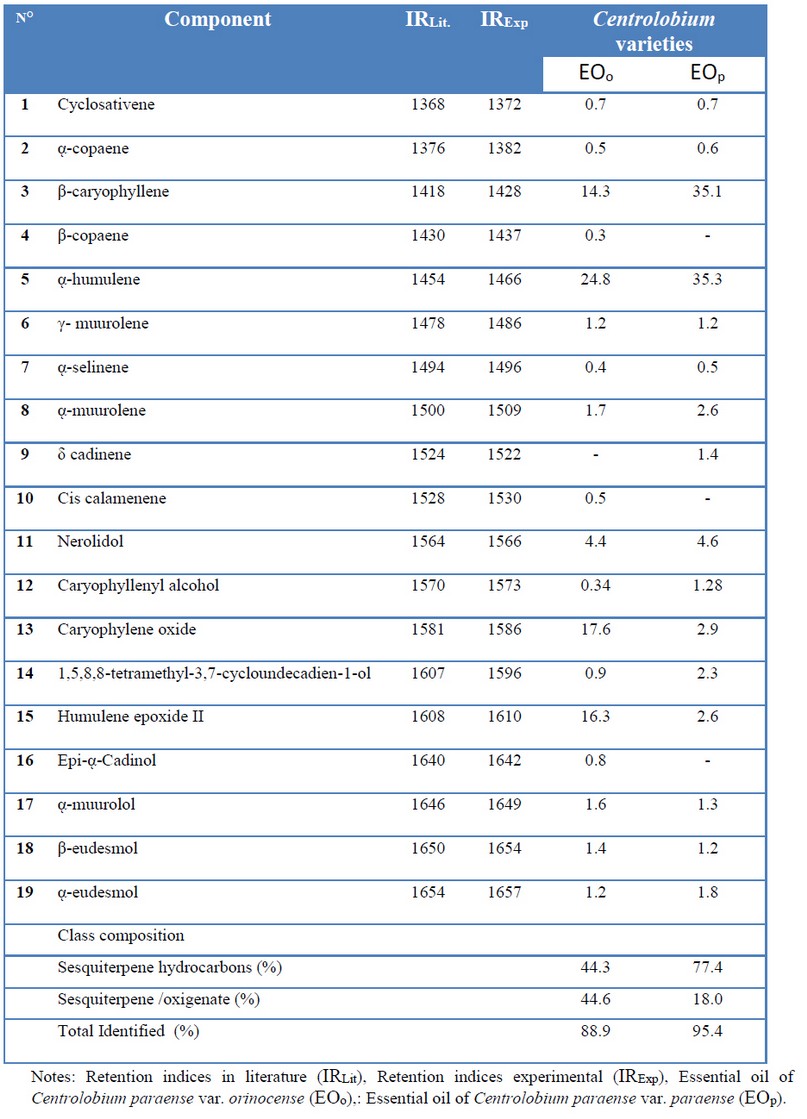 Table 1. Chemical composition of the essential oil (%) of two varieties of Centrolobium paraense from Venezuela. 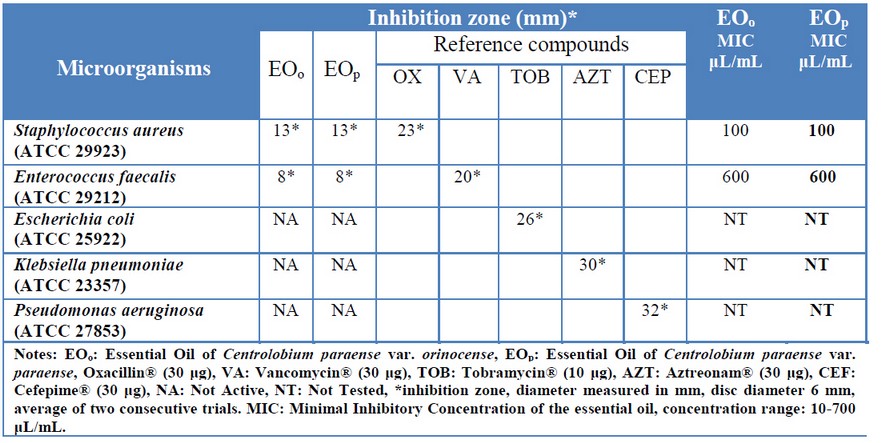 Biological activity of both oils was statistically superior (P<0.05) on the bacterial growth of S. aureus compared with E. faecalis with inhibition halos of 13 mm and 8 mm, respectively (Table 2). The MIC value of the oils was 100 μL/mL on S. aureus and 600 μL/mL against E. faecalis. These results suggest that the oils were more active against S. aureus. Although both oils (EOo and EOp) possess different chemical composition, the antimicrobial activity of the essential oils did not show statistically significant differences (p=0.841) against S. aureus (Table 3). Similar behavior was observed on E. faecalis (P=0.674). The statistical analysis indicated that the inhibitory effect of the essential oils against the two bacteria tested was in most cases not as strong as that of the reference compounds. (Oxacillin® and Vancomycin® respectively).

Table 3. ANOVA and Turkey’s multiple comparisons of biological activity of essential oils of Centrolobium (EOo, EOp), against S. aerus and E. faecalis.
The abundance, interaction mechanism, and presence of several reactive chemical components in the essential oils of both varieties, could have applications in the pharmaceutical and chemical industries. Previous investigations have shown that individual compounds detected in the essential oil of C. paraense show important biological activity. For example, β-caryophyllene has anti-inflamatory, anticarcinogenic, antibiotic, antioxidant, and local anesthetic activities14. The α-humulene showed anticancer activity15, anti-inflammatory effects16 and mixed with con β-caryophyllene increases its cytotoxicity against human tumour cell lines in vitro14. Nerolidol has an impact on the protein prenylation, and it can reduce adenomas in rats17. Caryophyllene oxide in combination with other sesquiterpenes showed higher anticancer activity against several cancer cell lines as human lung carcinoma, human colon adenocarcinoma, human leukemia cancer, human cervical adenocarcinoma, human gastric cancer, and human stomach cancer 18, 19, 20. The specific antibacterial activity of both oils on the tested microorganisms could be attributed to its high sesquiterpene content and the synergistic and antagonistic effects of these compounds. However, further studies are needed to obtain a better understanding of their biological activity.
CONCLUSION
This article is the first report on the differences in the chemical composition of the essential oil of these two varieties of Centrolobium paraense and their antibacterial activity, information that could be used with chemotaxonomic purposes in this genus. Results suggest that essential oils from both varieties of C. paraense could contribute to the control of infections caused by S. aureus and E. faecalis.