Candy Herrera1, Evelyn Guerra2, Victoria Penalver3, Andrea Rosas4, Yingying Wei5, Jack Pringle6, Baltazar Espinoza6, Baojun Song7
Available from: http://dx.doi.org/10.21931/RB/2020.05.01.4
ABSTRACT
The sex of the turtles is determined by the incubation temperature of the eggs during the mid-trimester of development. In green sea turtles (Chelonia mydas), recent studies show that sex ratios are changing, producing a female-biased sex ratio within the population. We developed a novel continuous model to analyze the dynamics of the green sea turtle population long-term. We determine the safe operating space for the proportion of eggs that become male at which the population of green sea turtle can exist without going to extinction. When the proportion of male eggs leaves this range the overall turtles’ population collapses. Additionally, we examined how temperature changes affect the sex ratios of the green sea turtle population.
Keywords: Green sea turtle, Sex ratio, Temperature-dependent sex determination, Population dynamics
1. INTRODUCTION
In this paper, we examine the sex ratio of sea turtles in relation to population collapse. We are particularly concerned with the population of green sea turtles (Chelonia mydas), in which temperature-dependent sex determination has been observed. Temperature-dependent sex determination (TSD) is a process where the temperature of an embryo’s environment results in the production of sex hormones that dictate the embryo’s sex development. This is an environmental sex determination system (ESD), meaning that the sex is determined depending on factors derived from the physical and biotic environments like temperature1,2. Every reptile species that exhibit TSD has a thermosensitive period during which the embryo sex is developed. For turtles, this period has been observed to take place during the mid-trimester of the embryo incubation period3.
Within the realm of TSD, there are three different possible patterns that a species uses for sex determination: FM-pattern, MF-pattern, and FMF-pattern. In the FM-pattern, female eggs are developed in low hatching temperatures while male eggs occur in high hatching temperatures; the MF-pattern is the inverse of the FM-pattern. The FMF-pattern dictates that female eggs develop in high and low temperatures while a medium range of temperature results in male eggs. Turtle embryos follow the MF-pattern, so at lower temperatures, the result is a mostly male hatchling population, and at higher temperatures, a primarily female hatchling population exists4. The temperature at which the sex differentiates is around 29.4◦C2,5. When the mean temperature of the nest during the thermosensitive period is at 29.4 ◦C, known as pivotal temperature, then we see an even distribution of male and female hatchlings occur. Whereas, when the mean temperature is above the vital temperature, then the hatchling sex population will be mostly female, and below it, will result in a primarily male population2,5,6. In recent years a disproportionate ratio of female to male turtle eggs has been observed in several different studies and has also been predicted to possibly lead to the extinction of sea turtles in the future5,7,8.
Since female sea turtles lay their eggs in chambers that they dig into the sand of their nesting beaches, it is reasonable to look into the factors that could be directly affecting these sand temperatures to understand why there is an imbalance in the ratio of female to male turtles. To determine these factors, researchers have proposed multiple hypotheses. One such hypothesis credits climate change with potentially leading to rising sand temperatures. This comes from the fact that global air temperatures are projected to increase, and there is a strong relationship between air temperatures and sand temperatures9–11. Another possible explanation for potential increases in temperature is an accumulation of microplastic on and within the beach sediment12.
This problem naturally lends itself to investigation via a sex-structured population model. An overview of the history of sex-structured models was described by Iannelli et al. .13. The discussion of sex-structured models first arose after it was realized that the one-sex stable population theory was insufficient in answering questions about the existence and interrelations of the sexes. It was found that trying to apply a one-sex model for both genders at the same time resulted in contradictory results. Kuczynski14 first noted this inconsistency. These inconsistencies between male and female reproduction rates were further noted and explored by Karmel15, making him the first to observe many of the ideas of two-sex population modeling. Whilst Karmel15 introduced many of the two-sex population ideas, Kendall16 brought the first significant dynamic model. The work done by Kendall16 on two-sex populations more accurately accounted for the dynamics of observed systems leading to further research-based on his work13. Although Kendall’s work has inspired several further studies into sex-structured models, the majority of published population models are unstructured concerning sex17. Some of the papers that use sex-structured models are Lee et al. 18 and Mignatti et al. 19. In both articles, the sex-structure modeling framework was utilized because it was noticed that the sexual dimorphism was critical in understanding the dynamics of the population as a whole.
In this paper, we developed a system of ordinary differential equations (ODE’s) model for general green sea turtles focusing on the impacts of the TSD on the overall population dynamics to determine a male to female sex ratio that leads to extinction.
2. METHODS
2.1. Model Development
The life cycle of green sea turtles starts on land when they emerge from their nests as hatchlings and immediately travel to the sea. Upon entering the ocean, the hatchlings are relatively unseen until they reappear as juveniles in the open sea20. This period between the hatchling and juvenile stage is composed of several years and is the life-stage that remains relatively unknown20. Thus, scientists have coined the term “lost years” to describe this stage of life20,21. Since these two first stages of the life cycle of the turtles do not carry relevant information for the development of the model, a simplified life cycle can be seen in Figure (1), which shows the “egg” stage as each individual that has not yet reached sexual maturity and the adult stage as only the sexually mature adults. 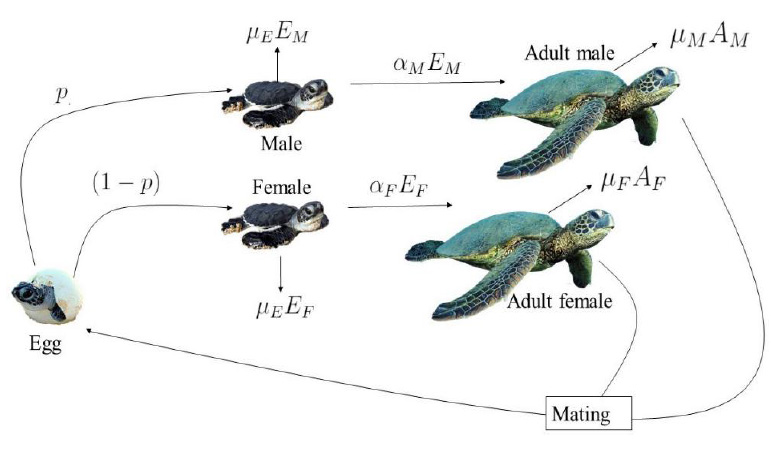 Figure 1. Compartmental diagram of the simplified life cycle of green marine turtle (Chelonia mydas).  The eggs with undefined sex will develop either in male or female, depending on the incubation temperature. Once hatchlings hatch, they will mature and will reach sexual maturity. After mating, new offspring are produced.
For green sea turtles, the mean age of sexual maturity is estimated to be within the range of 40-60 years22–24. When sea turtles reach sexual maturity, females and males return to their natal beaches to mate and nest. Male sea turtles usually breed every year or every two years, whereas female sea turtles generally breed every 2 to 5 years25,26. During mating season, sea turtles have multiple mates and lay several clutches of eggs at approximately 2-week intervals27. This scheme of the life cycle focuses mainly on the relationship between adults during the mating period. This interaction eventually will result in the production of eggs that can later develop into either female or male mature sea turtles. Also, it shows how the death of the adults and the movement out of the reproductive stage decreases the population of adult sea turtles, while the end of eggs and juveniles reduces the people of the “eggs” class.
On the other hand, the successful mating of adults will increase the number of eggs deposited every season. Each clutch can be divided into female and male eggs depending on the incubation temperatures7. If eggs reach maturity, this will increase the number of adults in the population.
To describe the long-term behavior of the green sea turtle population, we study the dynamics of the community with a continuous model. The main objective is to figure out the sex ratio that would ultimately lead the overall population of green sea turtles to extinction. We chose the continuous model to be able to witness the change within the turtle’s entire life cycle (60-70 years)24 and for the whole population over time. Modeling the distinctive aspects of the reproductive biology and nesting behavior of green sea turtles poses a significant challenge. The mating process is a complex interaction between male and female sea turtles that involves a variety of factors that could strongly affect the birth rate of the population. To clearly understand the principles involved in this interaction, we consider the mating process as a functional response, similar to continuous-time predator-prey models28.
Such as in predator-prey models, we can conveniently classify most of our variables involved in the mating process: (1) density of female population, (2) density of male population, (3) behavioral response of females during mating process, (4) characteristics of the males, e.g., searching efficiency29. To represent the successful number of mating interactions between males and females per unit time, which will eventually result in the production of eggs, we used the Holling type II functional response29,30. In predator-prey models, researchers suggest that ratio-dependence is suitable when the predator must seek its prey and consequently compete for food 31. In modeling the process of mating interactions between green sea turtles, we have to consider that male sea turtles have to search for females, and that male turtles will compete with one another to mate with a female32. Moreover, we have to consider some aspects, such as coupling time, associated with each female being found by a male and the fact that not every male will interact with every female. Thus, it made more sense to use a ratio-dependent system to produce more accurate results31.
In our model, we focus on the proportion of eggs allocated to males and females in the population, which is influenced by the temperature they are exposed to during the incubation period. Since the juvenile stage does not provide relevant information to the main objective of this investigation, the population is divided into two groups: eggs and adults, where “eggs” refers to the pre-reproductive life stages of the turtles. We denote the egg population and adult population for males and females as AM(t), AF(t), and  EM(t) and EF(t) at time t.
2.2. Model Description 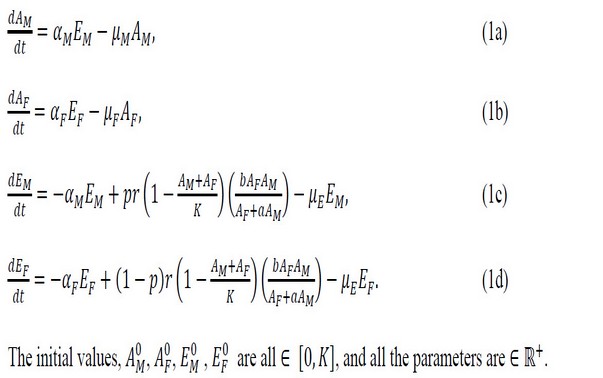 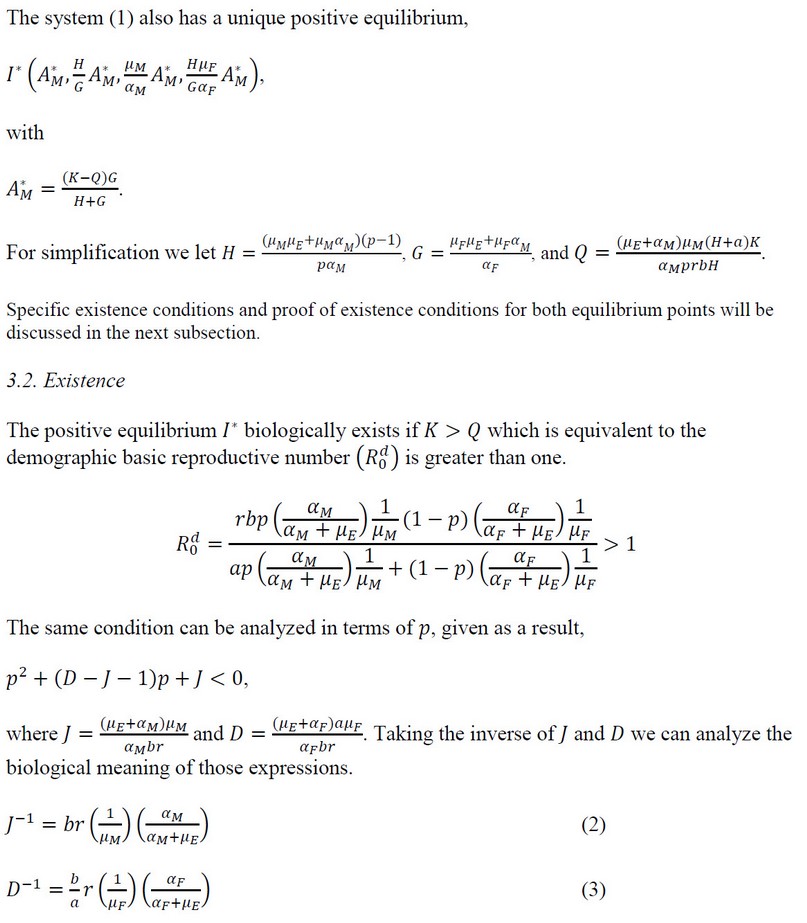 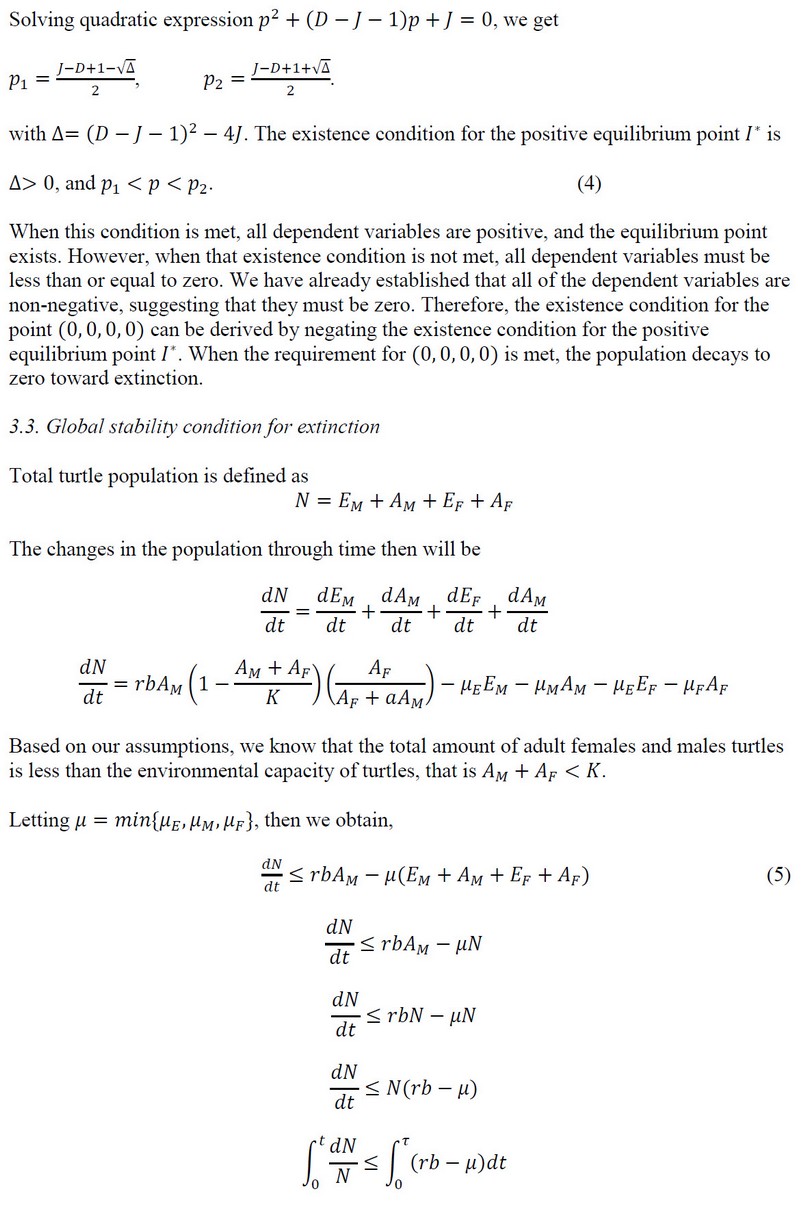 4. RESULTS
The following simulations were developed by using parameter estimations, as seen in Table (1). All parameter values in Table (1) are kept constant except for values of p . 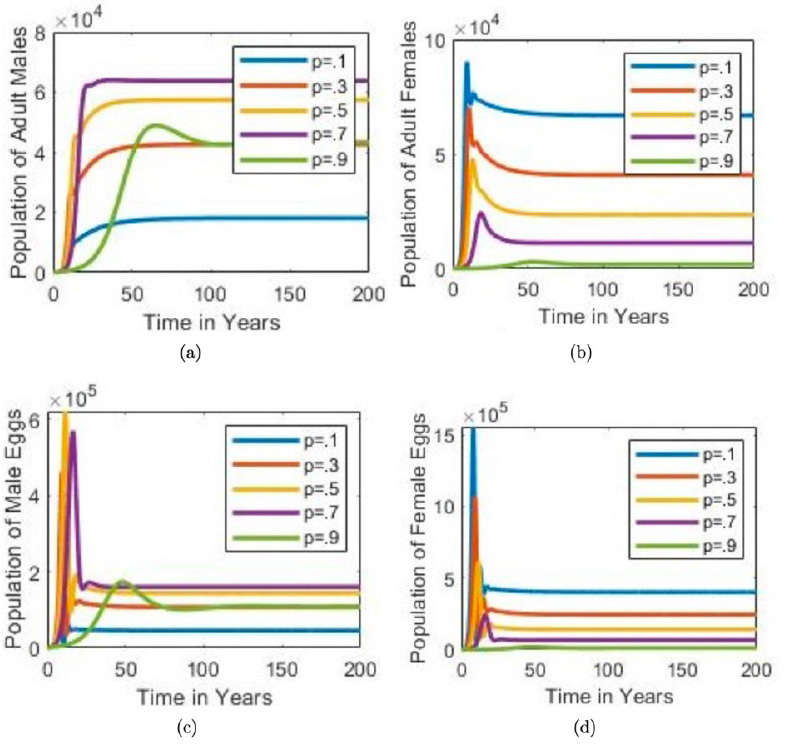 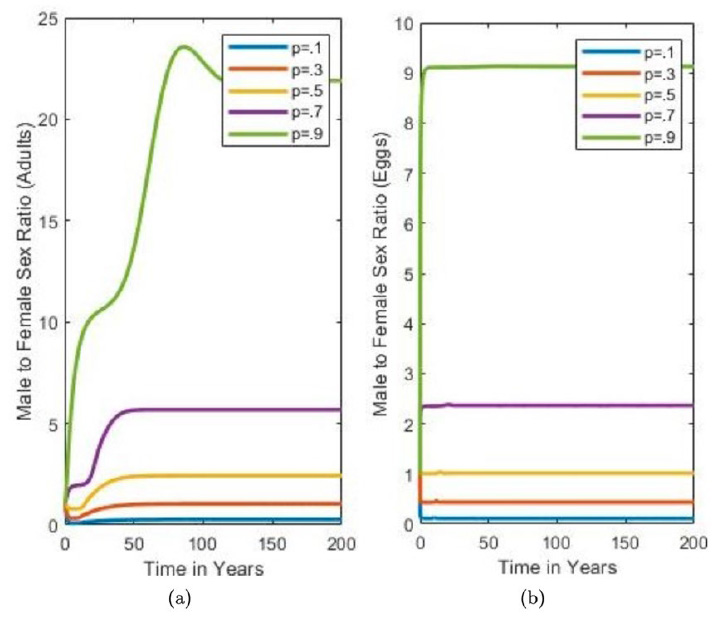 Figure 3. Sex ratios of individuals in adult (3(a)) and egg (3(b)) stages overtime when the interior equilibrium exists. Variation in sex ratios is due to changes in the proportion of male eggs (p) . 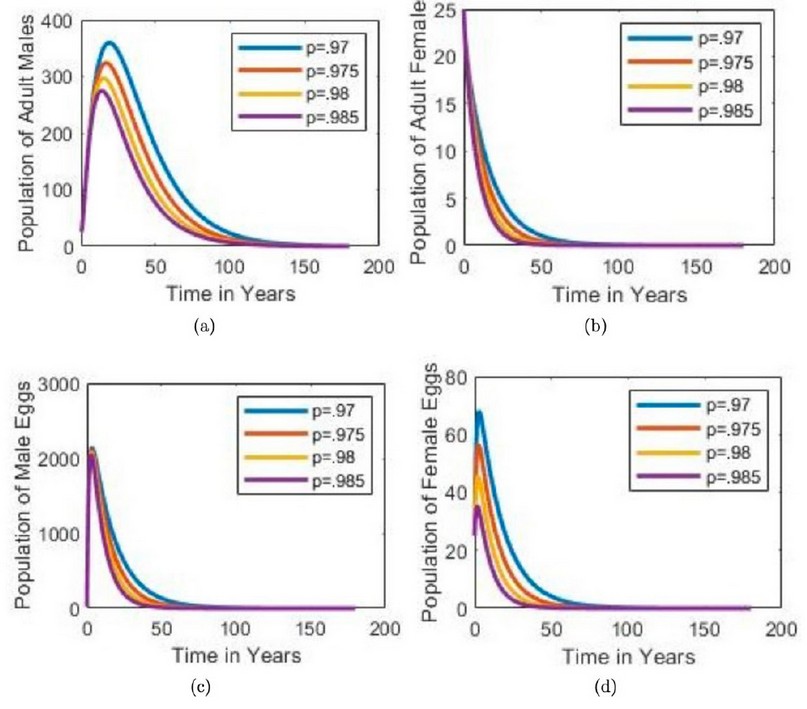 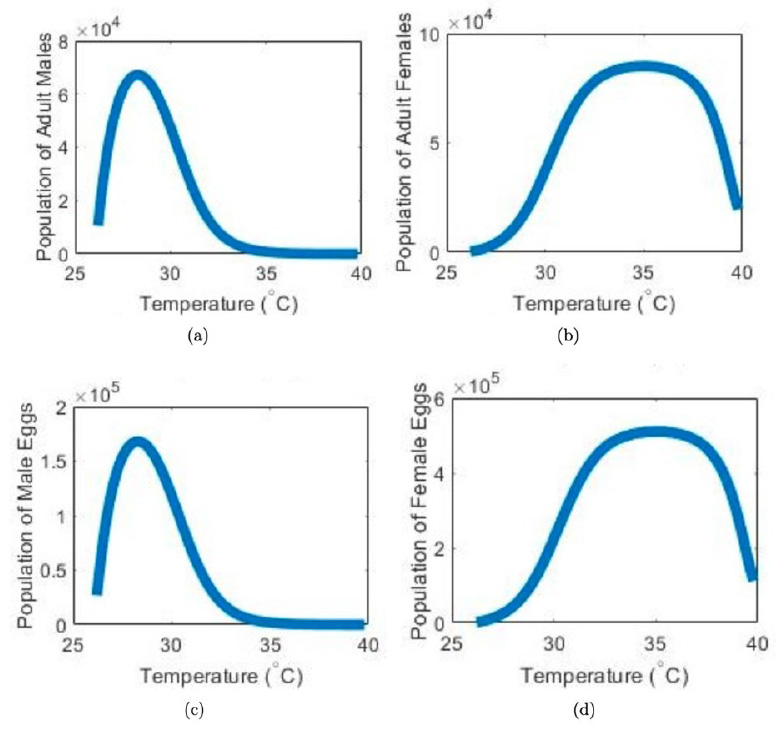 Figure 5. Population of adults and eggs as daily mean temperature increases. The changes in the population are due to variations in the proportion on male eggs caused by temperature p(T).
We only analyzed our system for values of p that satisfy the equilibrium existence condition. In other words, since is a function of T, we analyzed our system for temperatures that allowed  p(T)to still be within the equilibrium condition (8). Since our system is now analyzed with the new p(T)function, the graphs in Figure (5) reflect how temperature changes lead to different proportions of males and how those proportions lead to different population numbers for the different stages. 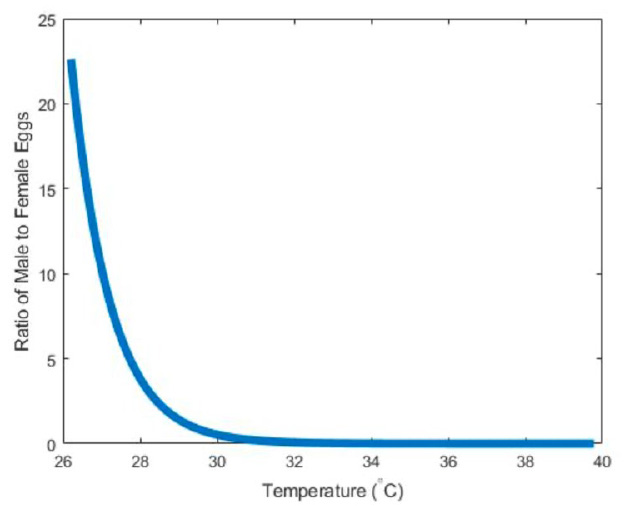