Table 2. Effect of thalidomide on the growth of L. donovani promastiotes
This study appears highly effective of thalidomide it was 25, 30 µg/ml concentrations of it to get 90% inhibitory growth and 10, 12.5 µg/ml concentrations to get 50% inhibitory growth of L. tropica and L. donovani. These results which are in agreement with20 The showed that uses of chlorpromazine as an antileishmanial agent in concentrations of 20, 25 µg/ml inhibit 90% of L. major and L. donovani growth in vitro at log
Phase. Other researchers used zinc sulfate to test the effect on L. major and L. tropica in vitro and observed that parasites in the control group were atypical growth procedures, but in the experimental group revealed a much slower growth rate 21. Another researcher indicates that synthesized pyrrolidine in different concentrations inhibits the growth of L. infantum compared with the control group22.
Thalidomide stimulates apoptotic-specific pathways via caspase 8-mediated cell death. At the mitochondrial level, they are in charge of c-junk terminal kinase (JNK) conditional release of cytochrome-c and S mac into the cytosol, where they organize the activity of the molecule that influence death apoptosis by stimulating T cells to produce IL-2, it alters natural killer cell (NK) function and numbers, thereby increasing NK-dependent cytotoxic activity 23. Thalidomide bounded to factor (TNF)-alpha inhibiting the production of interleukin (IL), a growth factor of 50% of the living cell, and they activate apoptotic pathways, causing cell death of promastigotes and decrease the growth rate to kill the promastigote cell. Thalidomide uses for cutaneous lesions treatment. Thalidomide was hypothesized to inhibit the activity of CRBN-containing E3 ligases by directly binding CRBN, 24. This study agreement with25 that the effect of some medicinal plants is used anti promastigote activity against L. aethiopica and L. donovani.
In the light of growth, the inhibitory effect of liposomal amphotericin B indicates that the lethal concentration of 50% of L. tropica was 5µg/ml, while the concentration of 20µg/ml was killed 90% of promastigotes at the log phase (72) hrs. compared with the control group, table (3)

Table 4. Effect of liposomal amphotericin-B on the growth of L. donovani promastigotes
There are many studies and research about leishmaniasis treatment. Most researchers used liposomal amphotericin -B to treat L. tropica and L. donovani promastigote in India; this drug is used because it is a safe and effective therapy for visceral and cutaneous leishmaniasis 26. Additionally,27 they proved that due to the failure of existing drugs, amphotericin-B has a cure rate of 100% at a dose of 0.75-1 mg/ kg for 1-20 intravenous infusions daily. It causes severe toxicity, e.g., hypokalemia, nephrotoxicity, myocarditis, and even death, also the high cost of therapy. However, doses of 5mg/kg/day of liposomal amphotericin B caused significantly lower toxicity rates than amphotericin B lipid complex or conventional amphotericin B deoxycholate. WHO recommended that 10 or 15 mg/kg of liposomal amphotericin B have high cure rates28. This study agreement with29 reported that amphotericin-B acts by binding to ergosterol in the cell membranes; the binding might lead to modulation in cell membrane permeability, formation of pores, induction of metabolic shock, ion leakage and promotion of cell death.
Fluorescent and gold liposomes (loaded with amphotericin B or empty liposomes) were used in vitro and in vivo to elucidate the liposomes bounded with cell walls in pathogens responsible for the infection. Empty liposomes (without amphotericin) remain intact without causing cell disruption. However, the binding of amphotericin-B-loaded liposomes resulted in cell death. This may be due to the inactivation of liposomes and the secretion of amphotericin B to bind the cell membrane of ergosterol and exhibit antiparasitic activity30. Amphotericin B can translocate from the liposome to the membranes of parasite or fungal cells and bind to parasitic or fungal ergosterol higher than cholesterol29.
The inhibitory mechanism of leishmanial action is thought to be drug-binding to parasite ergosterol precursors such as lanosterol, disrupting parasite membrane, producing and changing membrane permeability, then killing parasite 27. The specialized formulation has properties that increase activity, whereas toxicity reduces: penetration and constant levels into tissues, such as the spleen and liver; high transformation temperature leading to blood, tissues and macrophages stabilization; the presence of cholesterol in the liposome, that reduces the interaction of drugs with the membranes of mammalian cells and decrease their toxicity; It is highly related to ergosterol and its precursors to ensure anti-microbial efficacy. Initial doses higher than 5mg/kg provide better penetration and more prolonged tissue continuation than repeated lower doses31.
This study shows that L. donovani required a higher dose of liposomal amphotericin-B than L. tropica promastigote. It is 20mg/kg. However, the minimum effective dose remains unknown.30. The researchers appear liposomal-loaded with amphotericin-B led to the death of cells. This possibly led to liposome disruption and amphotericin-B secretion to bind ergosterol in the cell membrane showing antiparasitic efficacy.
It is worth noting that other experiments were conducted on the effect of the two drugs together. It showed an inhibitory effect on L. tropica, when amphotericin was fixed at a concentration of 2.5 µg/ml, and thalidomide concentration changed, the IC50 was 2.5 + 0.5 µg/ml at log phase (72) hrs. Table (5).

Table 7. Effect of synergism between thalidomide and liposomal amphotericin B on L. tropica (Note: thalidomide fixed at 2.5µg/ml)

Table 8. Effect of synergism between thalidomide and liposomal amphotericin -B on L. donovani (Note: thalidomide fixed at 2.5µg/ml)
The interaction between the drugs provides a successful effect; it appears to have high toxicity on both types of leishmania promastigotes, especially when amphotericin was fixed. The synergism caused a high inhibitory effect, decay and degeneration in the living cell organelles finally, cell death and disappearance. These results are in agreement with32 they concluded that combination treatment with thalidomide and glucantim reduced significantly the disease course than single treatment with each one of the drugs in mice infected with visceral Leishmania, and this effect was dependent on the production of 1L-10 and 1FN-Y, also illustrate that thalidomide is capable of downregulating disease advancement nevertheless it didn't completely discourage it. Others prove that the synergy between liposomal amphotericin -B and an antibacterial or antifungal agent reduces the viability of fungal cells, increases the permeability of the cell membrane, and increases cellular metabolic activity shortly after one hour of exposure33.
Thalidomide could hypothetically be included among potential drugs tested for its association with COVID-1934 based on its potent anti-inflammatory properties and activity in alleviating excessive inflammation and cytokine storms.35 confirmed the agreement to this work it was significant of the in vitro anti-leishmanial effect of the combination of allicin and AmB to reduce the required doses of the antibiotic and thus the toxicity associated with its use. Using a constant ratio analysis with the extra-cellular phase and a checkerboard analysis with amastigotes, the combination of the 2 drugs was moderate to synergistic at minimum concentrations versus both amastigotes and promastigotes; this represented an approximately two-fold decrease in the IC50 of the antibiotic added alone. The conclusion from33 appears that the synergism between liposomal AmB and other drugs causes inhibition of DNA-dependent RNA polymerase leading to the repression of RNA synthesis and cell death. This results in agreement with36 that is proved the liposomal amphotericin-B and selenium and the combination between them showed superior efficacy in the treatment of CL also noticed that no toxicity was reported.
The synergism between thalidomide and liposomal amphotericin- B appears to be more efficient in inhibiting the growth of promastigotes than when treated with each drug alone. This means that the synergism effectively inhibited both types of Leishmaniasis at lower concentrations.
It is evident from the figures (2), (3) for L. tropica and (7), (8) for L. donovani that using the treatment leads to changes in the morphological appearance from the spindle shape to the oval, circular or even irregular shape as well the occurrence of bulges and cracks in these parasites, figures (4), (5) for L. tropica and (9), (10) for L. donovani when treated with IC50 in comparing with untreated parasites, figures (2) and (6). 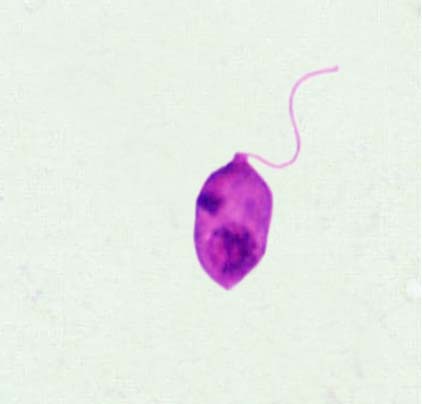 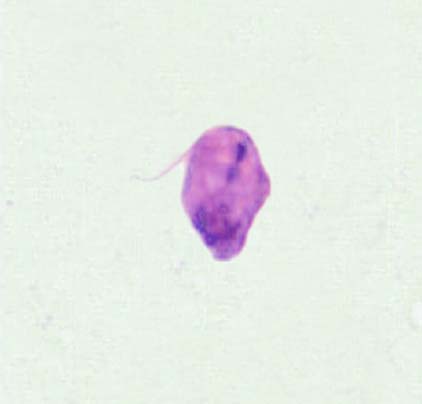 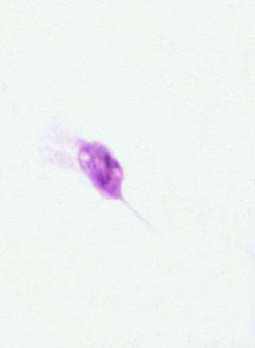 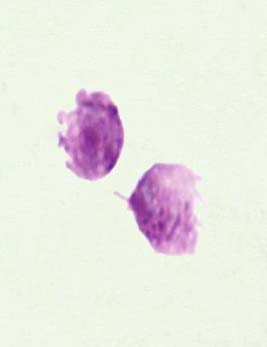 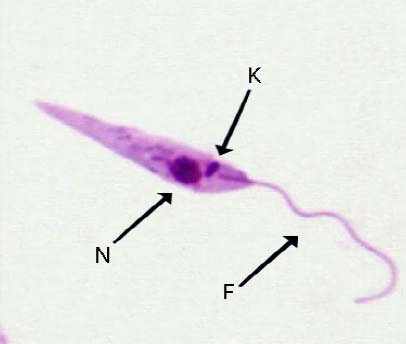 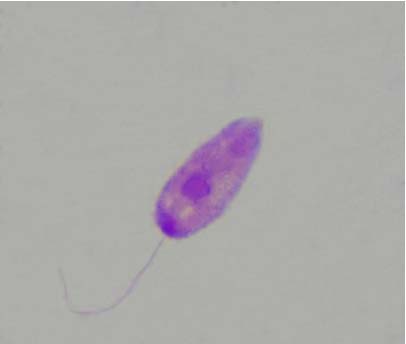 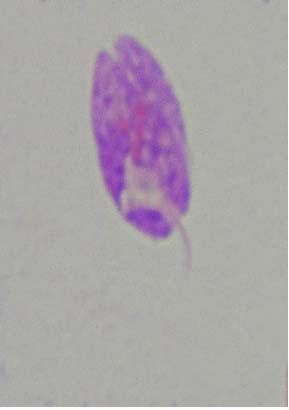 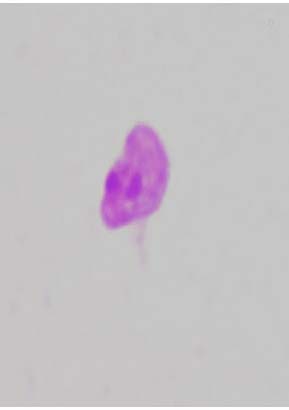 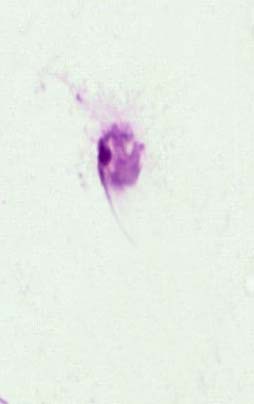