Previous / Index / Next
Traditional agricultural knowledge of banana, cocoa and sugar cane crops as a basis for the sustainable development of the rural parish Mariscal Sucre

Practices of traditional agricultural knowledge possessed by farmers of the Mariscal Sucre rural parish.
The study of the demographic characteristics and traditional agricultural practices commonly applied in the Mariscal Sucre parish was carried out by applying a survey to a sample of 61 farmers. Next, the main findings are explained through frequency tables, cross tables and simple and grouped bar diagrams.

Table 1. Frequency and percentages of gender (Source: Own elaboration)

Of the 61 respondents, 59, which corresponded to 96.7%, were male, while only 2, that is, 3.3%, were female. The findings were consistent with the assignment of tasks that rural families usually maintain. The coast, where the field activities are mainly carried out by men, while those of the home is assigned to women. 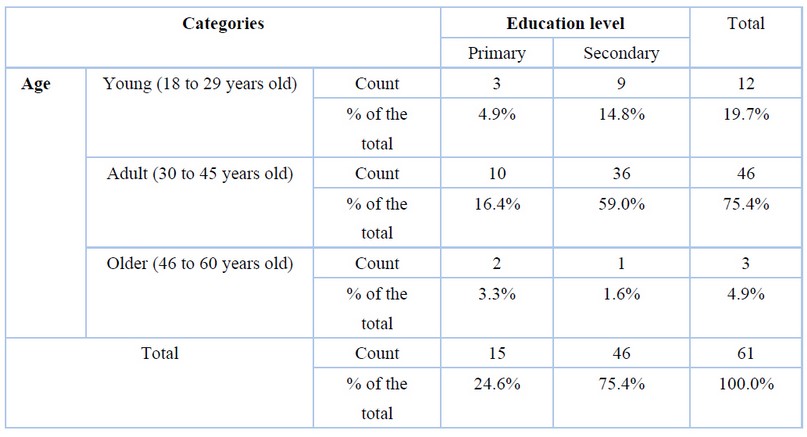 Table 2. Frequencies and percentages of the level of education compared to age (Source: Own elaboration)

It was recorded that 75.4% of the farmers were adults aged 30 to 45 years, 19.7% of young people aged 18 to 29 years, and a small proportion of older people, whose percentage was 4.9%. In addition, most respondents recorded their schooling level as secondary, except for the elderly, where primary education was more frequent than secondary, with 3.28 and 1.64%, respectively.

Table 3. Frequency and percentages of the ethnic group (Source: Own elaboration)
Of the five ethnic groups that were raised in the form, the respondents only identified themselves as mestizos and montuvios, with 90.2 and 9.8%, respectively. Under this precedent, the categories of this variable could be reduced in the future.

Table 4. Frequency and percentages of land ownership (Source: Own elaboration)
The land is generally provided for services, and almost all of the respondents selected this option, in fact, only two people indicated that the land was their property.

Table 5. Frequency and percentages of crops established by farm size (Source: Own elaboration)

95.1% of the respondents indicated that the farms they manage have an area between four to eight hectares, and 4.9% that their farms have a size of four hectares or less. Of the three types of crops established in the parish, the most widespread was banana, followed by cocoa and sugar cane, with percentages of 49.2; 41 and 9.8%, respectively.

Table 6. Frequency and percentages of family size (Source: Own elaboration)

The families of the Mariscal Sucre parish are 96.7% of four to six people and 3.3% of seven to nine people.

Table 7.   Frequency and percentages of the main crops (Source: Own elaboration)
The farms of the parish present intensive cultivation of bananas, cocoa and sugar cane, with percentages of 43.5; 36.2 and 8.7%; however, when dealing with family systems, other types of products can be found that are cultivated in a smaller proportion, or sometimes immersed in commercial crops, they are generally products for family consumption and represent 11.6% of the crops. 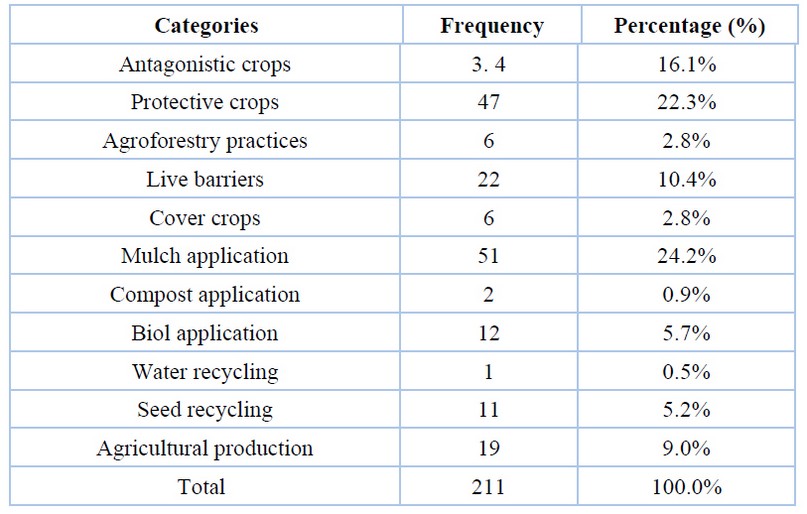 Table 8. Frequency and percentages of applied agro-ecological practices (Source: Own elaboration)
Of the 12 agro-ecological practices that were presented in the survey, all except one (crop rotation), had some degree of incidence in the agricultural production systems of the Mariscal Sucre parish. Therefore, this option is set aside for the analysis. The most frequent agro-ecological practices in the area consisted of the application of Mulch at 24.17%, then knowledge about the management of protective crops at 22.27%, followed by the administration of antagonistic crops at 16.11%.
Then, the practice of applying live barriers has a 10.43% incidence. Lastly, agricultural production with 9.01%, application of Biol with 5.69% and recycling of seeds with 5.21%. These practices have a medium frequency. Finally, the least frequent were knowledge about agroforestry practices and cover crops, with 2.84% each and Compost and water recycling, with 0.95 and 0.47%, respectively.
Determine the level of correlation that exists between the practices of traditional agricultural knowledge and the development of the agroecosystems of the Mariscal Sucre rural parish.

Sustainability analysis of productive systems.
To know the degree of sustainable development of the agricultural systems of the parish, a survey was applied to 61 farmers in the area; then the data was processed in an Excel matrix that can be viewed in the annexes to evaluate the degree of sustainability it was necessary to establish the average of the 61 respondents for each of the sustainability indicators that make up the three dimensions of agro-ecological development. The results are presented as radial graphs for each dimension. 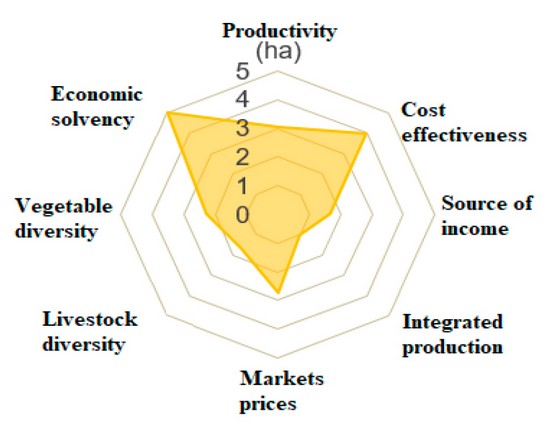 Figure 1. Economic Sustainability
From the economic dimension, the best score was that of economic solvency, since farmers rated their farms with an optimal value of 5, followed by profitability with a value of 4, then the productivity indicator with 3. The price indicators of market and plant diversity are around medium sustainability, with values of 2.7 and 2.3, respectively. The indicators of sources of economic income, livestock diversity and integrated production tend to agro-ecological unsustainability since their values were 1.7, 1.7 and 1, respectively. 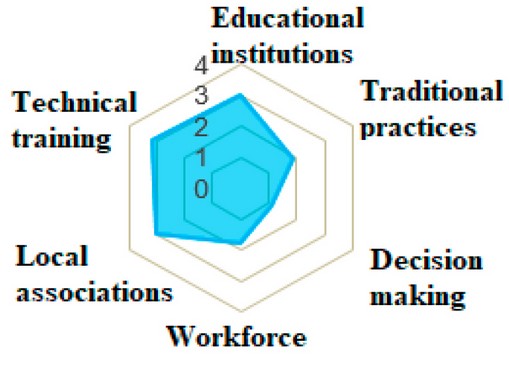 Figure 2. Social Sustainability
The best-scored indicator was technical training, with a value of 3.1, followed by the indicator of access to education since the parish has at least one educational institution and the indicator of belonging to local groups or associations. of farmers, both scored with a value of 3, that is to say that the three indicators are around a medium degree of sustainability. The indicators of knowledge of traditional or ancestral agricultural practices, the type of labor used in the work of the farm and the degree of participation that family members can have in decision-making, with values of 1.9, 1.8 and 1.1, respectively, that is, they have unsustainability. 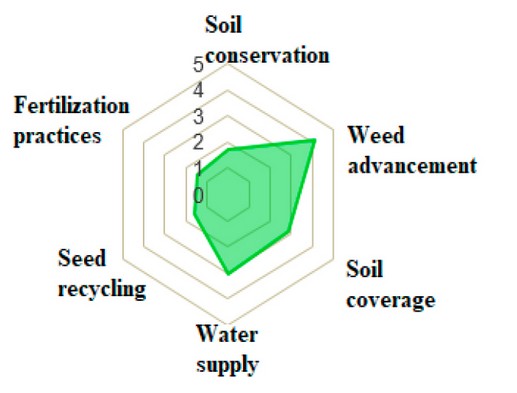 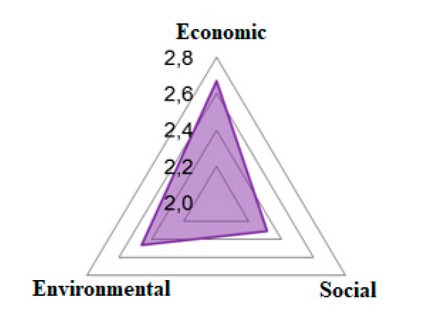 Figure 4. Performance for each dimension
Analysis of the instrument's reliability.
The internal consistency statistic coefficient of Cronbach's Alpha was used to determine the reliability of the evaluation instrument (survey).
The index can take values from zero to one so that its assessment scale is distributed as: unreliable (<0.7), acceptable reliability (0.7 to 0.90) and redundancy or duplication (>0.90 to 1). Where a value of 0.80 would indicate the optimal reliability of the instrument.
The test was run in SPSS software, for which the database was exported from an Excel file; the data was normalized and refined, considering that it is a mixed form and the first section contains classification data. While of the sections corresponding to the dimensions: economic, social and environmental, Of the 20 evaluation items, 10 were excluded because their variables did not correspond to scalar or ordinal variables, and the particular cases were not discriminating enough, however. In the end, they were helpful in determining the degree of sustainability of agricultural systems.
Cronbach's alpha value of 0.72 indicated that the instrument was reliable enough to collect consistent information regarding the development of agricultural systems in the rural parish of Mariscal Sucre.

Table 10. Normality tests
Before choosing the correlation statistic, the variables were analyzed to verify if they met the parametric or nonparametric statistics criteria.
The two variables come from independent samples; they are of the ratio scale type; however, only the variable: degree of sustainability, presented a significance > 0.05; complying with the normality criterion, so it is decided to use the statistic, Spearman's Rho[2] of nonparametric statistics.

The variables present a moderate positive correlation index of 0.48 and a statistical significance of less than 0.05 (p-value < 0.05), so the null hypothesis is rejected, and the alternative is accepted, which maintains that the Traditional agricultural knowledge practices have a favorable impact on the sustainable development of agroecosystems in the rural parish of Mariscal Sucre.
Simple dispersion of the degree of sustainability by applied agro-ecological practices.
In the scattergram, it can be seen that the points have an increasing linear relationship. 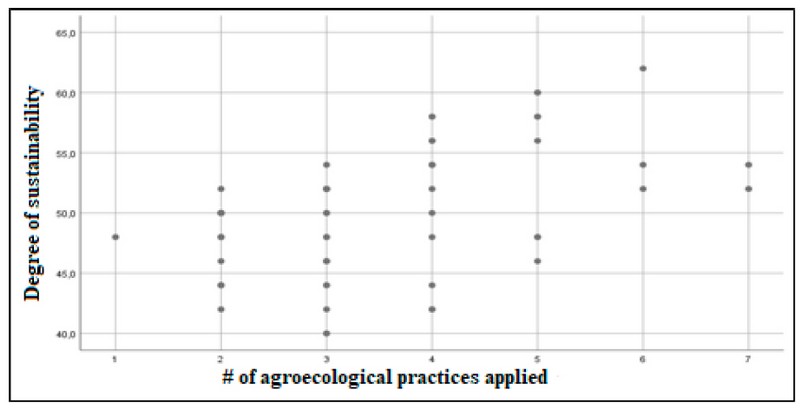 Figure 5. Correlation between agro-ecological practices and the degree of sustainability
DISCUSSION
The research started from the need to know how agro-ecological sustainable the agricultural systems of the Mariscal Sucre parish, which belongs to the Milagro Canton.
A wide range of analysis methodologies was found, some that were developed more than two decades ago, and others more current, which are the result of the modification that the previous ones have suffered. For this reason, the document presented those that were applied. More frequently in Latin American countries. These methodologies were: IICA, SAFE, FESLM, MESMIS and REDAGRES; without a doubt, the one that presented the most significant number of cases was MESMIS. They promote these methodologies' ease of application; by sharing the same methodological framework, they assess the degree of sustainability through indicators. 9
The method chosen to evaluate the degree of sustainability of the agricultural systems in this study was MESMIS; there were a total of 20 indicators related to the indicators designed by Albarracín, although these were duly adapted to the local context 10. Similarly, Fonseca's research was considered by including the REDAGRES traffic light classification in the presentation of the results 11. The sustainability indices calculated for the 61 farmers yielded values from 40 to 62% with an average of 50%, being classified as unsustainable; on the other hand, the agroecosystems analyzed by Albarracín had indices of 62 to 76%, that is, they were classified as unsustainable. as moderately sustainable. In the parish, only three systems presented indexes of 60 to 62%, barely meeting the minimum values of average sustainability. 12
The most frequent agro-ecological practices corresponded to knowledge about the existence of protective, antagonistic crops and the application of Mulch as soil cover, the others were applied little, and even crop rotation was non-existent. The correlation between these practices and the degree of agro-ecological development was moderately positive, with a Spearman's Rho correlation index value of 0.48, which leads to the rejection of the null hypothesis and the acceptance of the alternative hypothesis, which indicates that the implementation of Traditional agricultural knowledge practices has a favorable impact on the sustainable development of agroecosystems in the rural parish of Mariscal Sucre. On the other hand, the farms' development is mostly influenced by the economic component; therefore, it cannot be assumed that there is direct causality between the variables.
Lodana experimental center of the Universidad Laica Eloy Alfaro de Manabí 13; and the second, carried out in the Río Negro Sopladora National Park in Azuay, proposes the implementation of livestock production of minor species and the production of organic fertilizers from agricultural residues 14. The authors state that these strategies can almost immediately affect farm productivity and therefore take another step toward the country's ecological transition. For these reasons, the agro-ecological management proposal was raised from the productive dimension, including some practices of traditional knowledge, both in the agricultural and livestock components.
CONCLUSIONS
It was determined that traditional agricultural knowledge practices favorably influence the development of banana, cocoa and sugar cane crops established in the rural parish of Mariscal Sucre, finding a value of 0.48 for the Spearman's Rho statistic, indicating that there is a moderate positive correlation between these variables.
An agro-ecological management proposal was established to promote the development of banana, cocoa and sugarcane crops through implementing practices for raising minor species, polycultures and the production of organic fertilizers from farm residues. To diversify the agricultural production system and boost the efficiency of the farms.
Conflicts of Interest: The authors declare no conflict of interest