Table 1. Treatments analyzed in this work.

The treatments followed a completely randomized design (DCA) 17, and the experimental units of each treatment consisted of 330 plants, totaling about 1980 plants. Twenty-five random plants were chosen from each experimental group in each treatment for evaluation.
Plants were fertilized with Biocompost Organic Fertilizer (Organicgreen S.A., Ecuador) (50 g/hole), and EcoFungi (EcoMicrobials, Florida, USA) a mix of mycorrhizae (20 g/20 l of water) and Starlite bioregulator (Organicgreen S.A., Ecuador) (50 ml/20 l of water) applied to the ground at the first day of transplanting and along the crop cycle totaling six fertilizations.
Nine harvests were made at intervals of four to five days for each one. This began when the cucumber fruits presented the right color and size. The second, third, fourth, fifth, sixth, and seventh applications of the treatments were performed at 27, 34, 41, 48, 55, 62, and 68 days after the transplant, respectively. In total, seven crops were made throughout the crop cycle.
Response Variables. The area under the relative disease progress curve (AUDPCr) was calculated using five affected leaves of the upper middle third of the plant and a -100% damage scale 18.
Stem diameter (SD, in mm) was measured with a Vernier caliper at 30 cm from the ground when the crop had 50% flowering.  Fruit weight (FW, in g) was measured by weighting fruits in each harvest. The number of fruits (NF) was measured by counting all fruits of each harvest. The number of not-set fruits (NNSF) was assessed, by counting the number of dead fruits in each treatment.
Plant height (PH, in cm) was measured when the plant had 50% of the flowering.
Profit/cost analysis was estimated using the methodology suggested by CIMMYT19 that analyzes all the benefits and costs of the different treatments.
Statistical analysis. We performed an analysis of variance to test hypotheses about the fixed effects of treatments and the comparisons of means to determine the response of the best treatment using SAS University software, Cary, NC.  For this, we contrasted ways using one degree of freedom and α=0.01. Likewise, the analysis of variance allowed estimating the variance components for random effects.  The comparison of means was performed using the multiple Tukey tests at α = 0.05, and the association between the variables studied were analyzed using Pearson's correlation test 17.
RESULTS
Before the analysis of variance, analysis of normality and homogeneity of variances of the variables and the treatments were made. This analysis showed that the variables AUDPCr, NF, FW, and NNSF were not normally distributed, so the data was transformed to square root to normalize it. For AUDPCr, severity data were arcsine transformed 17.
The analysis of variance of the following variables, AUDPCr, SD, NF, and FW, showed that the coefficients of variation (CV) are within the ranges allowed for this type of research (CV of 7.61 to 35.43%) (Table 2). Highly significant differences were observed at the probability of p <0.01 for all the variables evaluated. This result indicates that at least one of the treatments was different from the others (Table 2). The analysis of variance of the variables NNSF and PH showed that the CV, are within the ranges allowed for this type of investigation (CV from 8.08 to 29.44 %) (Table 2). Highly significant differences were observed at the probability of p <0.01 only for PH. This indicated that at least one of the treatments is different in PH. In contrast, there were no significant differences in NNSF (Table 2).

The analysis of means performed by the Tukey test at p <0.05 probability for the variables AUDPCr, SD, NF, FW, NNSF, and PH, showed significant differences in all cases except for NNSF, where all treatments are statistically equal (Table 3). 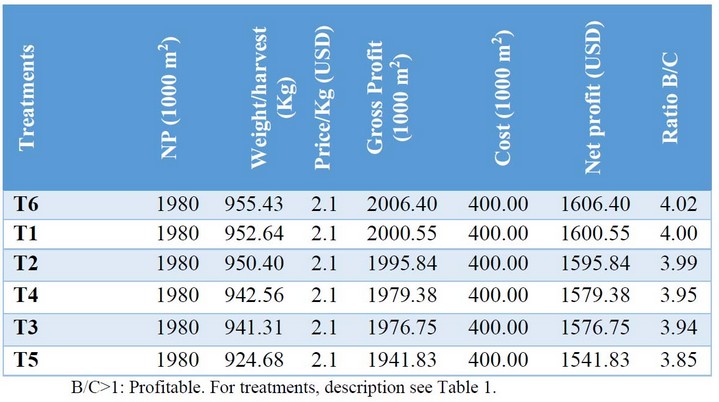