Previous / Index / Next
Allelopathic effect of sunflower residues on some soil properties and growth parameters of wheat, bean and flax crops

Table 1. Soil properties of the field according to the samples taken at 2, 4 and 6 weeks after mixing sunflower residues compared with the controls 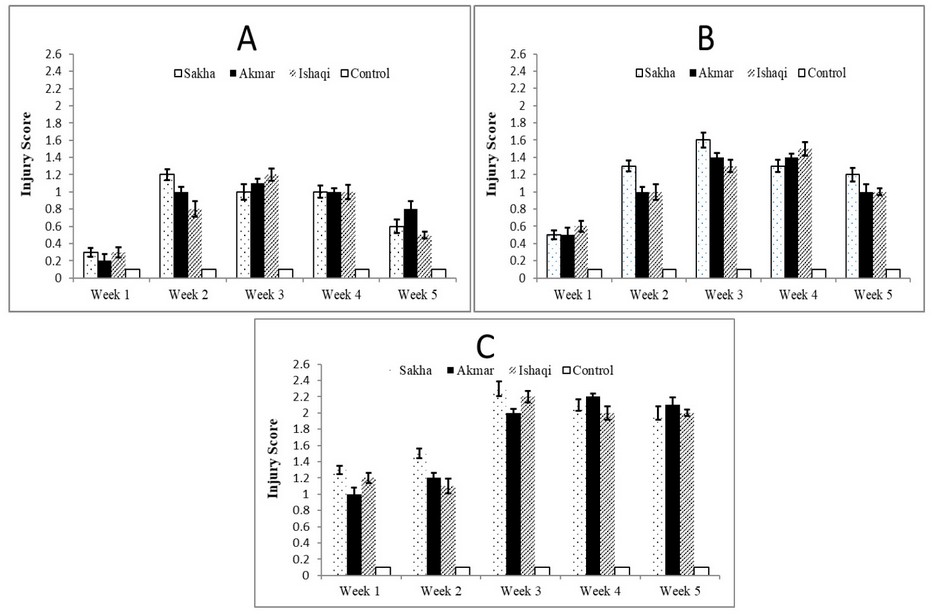 Figure 1. Injury symptoms of proposed successive crops affected by three varieties of sunflower residues mixed with soil field A: Wheat, B: Broad bean, C: Flax. Scale from (0–5) 0: no harm, 1: slight yellowing, 2: yellowing or burning, or visible dwarfing, 3: yellowing, burning or severe spotting, 4: semi-dead plants and 5: complete plant death
Crop Growth Parameters
As can be seen from the data presented in table 2., most of the study growth parameters of the wheat crop were enhanced by the residues of the three sunflower varieties. Although plant high and flag leaf area treats of wheat crop did not show a significant difference within the studies treatments, the weedy check recorded the highest value of plant high, which was 91.6 cm and the most negligible value of flag leaf area, which was only 29.36 cm. Also, the weedy check treatment recorded the lowest values compared to the other studied traits.
Table 3 shows the negative effect of all studies' treatments regarding the broad bean crop. The wide bean plant cultivated after mixing sunflower residues suffers from these treatments. The high of broad bean plants did not reach significant variations in all treatments. However, the plants growing in the weedy check treatment recorded the highest value of plant high, which was 85.33 cm. The other studied traits presented in Table 3. appeared that the free weed treatment was the highest in terms of the superiority of the studied features, which differed significantly from the sunflower residues treatment, which came less than expected as a result of the negative effect of sunflower residues on this crop.

As for the flax plants grown after the sunflower residues, the same trend of the broad bean plants was sculpted regarding the negative impact of these residues in all the studied traits. The results shown in Table 4 showed that the treatments were significantly different from the free weed treatment, which come in the highest values of characteristics.
DISCUSSION
Soil Nutrient Analysis
The sunflower residues increased the amount of the essential nutrients for plant growth (NPK) and those necessary nutrients beneficial for the activity of microorganisms and their proportions. The results align with the results of Ullah et al., 20189 which confirmed that sunflower residue incorporation at 6 ton ha-1 improved soil health, suppressed weeds and resulted in better seed yield of spring-planted mung bean. Returning soil fertility naturally is desirable as it is one of the promising strategic solutions to provide it naturally without using chemical fertilizers, which negatively affect the properties of the soil10. The extreme extravagance in adding chemical fertilizers to the soil in quantities that exceed the needs of the plant and at unsuitable dates for the growth stage of the crop leads to the destruction of the balance in the soil between the elements of the plant's food and creates an unbalanced environment for the growing plants in addition to the possibility of an imbalance that harms the biological diversity in the soil.
Crop Injury Score
Various crop sensitivity to the sunflower residues is due to genetic factors related to genetic variation. Many researchers concluded that the field crops grown after sunflowers were affected diversely, and the degree of the effect depended upon the extract's concentration and the sunflower biomass in the field soil11.
Crop Growth Parameters
The results in Table 2. indicated the positive effect of sunflower residues on growth characteristics and seed yield of the wheat crop as a result of the positive response to those residues. This comes as an expected result of the response to improving the soil with the necessary elements needed by the wheat crop, which helped in its healthy development and growth, thus improving yield and quality. The current results are consistent with12,13, who mentioned that the wheat crop is suitable for cultivation under sunflower allelopathic stress. The results of the broad bean and flax crop response came to the exact opposite of the results achieved in the wheat crop, as shown in Tables 3 and 4. Despite the revitalization of the soil with the necessary elements by the sunflower residues, the allelopathic effect was negative by reducing the growth parameters, which affected the reduction of seed yield. Over 200 natural bioactive compounds include allelopathic compounds characterized in sunflower plants. Most of these compounds are involved in inhibiting or stimulating germination and growth of organisms, such as heliannuols, terpenoids, flavonoids, chlorogenic acid, chlorogenic acid, and scopoletin, most bioactive compounds found in the sunflower plants14.
CONCLUSIONS
Sunflower residues are a valuable source of nutrition and play an efficient role in sustainable crop production. Not all successive crop shows a positive response to sunflower residues because the allelopathic substances which secrete them, in turn, play a positive or negative role on the subsequent crops. The improvement in soil properties and suppression resulted in better wheat yield. On the contrary, it negatively affected the growth parameters and yield of bean and flax crops. In short, sunflower residue incorporation may provide multidimensional benefits for better weed control, enhanced soil health and higher seed yield of wheat. More studies are needed to determine the allelopathic effects of sunflower residues on different successive crops.
REFERENCES
1.        A. A. Almarie, Mamat, A. S., Wahab, Z., & Rukunudin, I. H. Chemical composition and phytotoxicity of essential oils isolated from Malaysian plants. Allelopathy Journal,2016; 37(1), 55-69.‏
2.        Chen, Y.-S., Yu, H.-M., Shie, J.-J., Cheng, T.-J. R., Wu, C.-Y., Fang, J.-M., & Wong, C.-H. Chemical constituents of Plectranthus amboinicus and synthetic analogs possessing anti-inflammatory activity. Bioorganic & Medicinal Chemistry,2014;22(5), 1766-1772.
3.        Ahuja, N., Batish, D. R., Singh, H. P., & Kohli, R. K. Herbicidal activity of eugenol towards some grassy and broad-leaved weeds. Journal of Pest Science, 2014; 88, 209-218.
4.        Jabran, K. Manipulation of allelopathic crops for weed control Cham: Springer International Publishing,2017;pp. 65-75.‏
5.        Purvis, C. E. and Jones, G. P. D. Differential response of wheat to retained crop stubbles, other factors influencing allelopathic potential: intraspecifc variation, soil type and stubble quality (Triticum aestivum). Australian Journal oFAgricultural Research,1990; 41:243-251
6.        Cenusko, K. and Borkey, V. The effect of fore crop, soil tillage and herbicide on weed infestation rate and on the winter wheat yield. Rostlina Vyroba,1992;38:603-609.
7.        A. F Almehemdi, Mheidi, U. H., and Almarie, A. A. Estimation leaf area model and growth performance of buckwheat under Iraqi environment conditions. JAPS: Journal of Animal & Plant Sciences, 2017; 27(5).
8.        A. Almarie, Bioherbicidal Potential of Eucalyptus and Clove Oil and their Combinations on Four Weedy Species. Iraqi Journal of Science, 2021;1494-1502.
9.        Ullah, R., Aslam, Z., Khaliq, A., & Zahir, Z. A. Sunflower residue incorporation suppresses weeds, enhances soil properties and seed yield of spring-planted mung bean. Planta Daninha, 2018;36.
10.      Gunfer, G. Soil fertility on an agricultural frontier: The US Great Plains, 1880–2000. Social Science History, 2021; 45(4), 733-762.
11.      T. Abbas, Ahmad, A., Kamal, A., Nawaz, M. Y., Jamil, M. A., Saeed, T., ... and Ateeq, M. Ways to use allelopathic potential for weed management: A review. Int. J Food Sci. Agric , 2021;5(3), 492-498.
12.      Bashir, U., Javaid, A., & Bajwa, R. Allelopathic effects of sunflower residue on growth of rice and subsequent wheat crop. Chilean Journal of Agricultural Research, 2012; 72(3), 326.‏
13.      Baghaie, A. H., & Daliri, A. Effect of applying sunflower residues as a green manure on increasing Zn concentration of two Iranian wheat cultivars in a Pb and Cd polluted soil. Journal of Human, Environment and Health Promotion, 2019; 5(1), 9-14.‏
14.      Nasim, W., Ahmad, A., Amin, A., Tariq, M., Awais, M., Saqib, M., ... & Ali, S. Radiation efficiency and nitrogen fertilizer impacts on sunflower crop in contrasting environments of Punjab, Pakistan. Environmental Science and Pollution Research, 2018; 25(2), 1822-1836.‏
Received: August 25, 2022 / Accepted: October 12, 2022 / Published:15 November 2022
Citation:  Flayyih T M, Almarie A A. Allelopathic effect of sunflower residues on some soil properties and growth parameters of wheat, bean and flax crops. Revis Bionat a 2022;7(4) 38. http://dx.doi.org/10.21931/RB/2022.07.04.38
Back to content