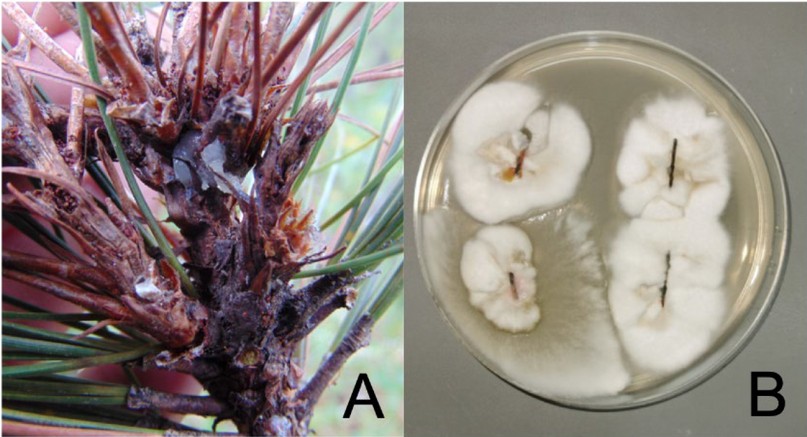 Figure 1. (A) Pine needle lesions and resin exudation at the base of the fascicles; (B) Endophytic fungal growth from pine needles.
RESULTS AND DISCUSSION
A total of 14 monoaxenic isolates were obtained from the 7 trees analyzed. All samples were successfully amplified and sequenced. The size of the amplicons ranged from 500 to 700 bp. The sequencing results yielded 6 genera and 7 different species. The endophytic fungi identified were Fusarium lateritium, F. pseudocircinatum, Pestalotiopsis pini, P. microspora, Xylaria grammica, Trichoderma atroviride, and Nigrospora oryzae. The most frequently identified species was P. pini, while Trichoderma atroviride and Xylaria grammica were the least frequent (Table 1). All the fungal isolates in this study belong to the Ascomycota phylum, which agrees with what has been reported in the literature regarding the classification of endophytic fungi in plants6, 8, 19. However, the isolates were grouped under the Sordariomycetes class, and this finding contrasts with what was previously reported in Germany and Spain, where the Dothideomycetes class was the most frequent in Pinus silvestris19, 20. Something similar happened with the endophytes described in Pinus nigra subsp.
On the other hand, endophytic fungi of the Arthoniomycetes class were the most frequent in Pinus silvestris from Sweden24, and the Leotiomycetes class was the most commonly found in the United States and South Korea in Pinus taeda, P. leiophylla and P. densiflora respectively25-27. The Sordariomycetes class was the second in frequency in Spain, South Korea and the USA19, 26, 27, while in a study carried out in Germany, fungi of the class Sordariomycetes were found in 31% of all isolates20. Moreover, according to what was reported by Bullington et al. in the USA and Taudiere et al. in Croatia this class was the least frequent in both studies21, 22. The high diversity of microorganisms that pine species can harbor in different geographic regions is evident, and multiple factors could influence the prevalence and distribution of fungal communities in coniferous species. Further studies are needed to clarify the main determinants of the prevalence of various classes of fungi in this group of trees.
Of 14 isolates, 6 (42.9%) belonged to two species of the genus Pestaloptiopsis: P. pini, (n = 4) and P. microspora (n = 2). Fungi grouped in this genus are generally considered secondary pathogens that can be responsible for a wide variety of plant diseases including cankers, dieback, leaf spots, needle blight, tip blight, grey blight, and severe chlorosis, among others13. The presence of Pestalotiopsis spp. in pines has been reported in Iraq, Spain, Portugal, China, USA, Slovakia and some other European countries 13, 28-32, but as far as we know this is the first report of two species of the genus Pestalotiopsis in Honduras.
Similarly, Fusarium lateritium (n = 2) and F. pseudocircinatum (n = 1) were identified in this study. Fusarium spp. it is among the main genera of endophytic fungi. This genus includes important plant pathogens that affect both forest and agricultural species. Although the presence of F. lateritium and F. pseudocircinatum has been reported in pine trees33, there is little information in the literature on these two species that cause pine infection. Romon et al. suggested that F. lateritium was a potential agent for the biological control of infections by phytopathogens, mainly F. circinatum34. It is important to highlight that, although the ITS regions are considered a reliable universal marker for identifying Fusarium, the combination of at least two loci could be more informative and conclusive for the discrimination between species, which is a limitation in this study.
On the other hand, two isolates of the genus Nigrospora, one Xylaria grammica and one Trichoderma atroviride were identified. These fungi have also been identified as endophytic microorganisms of pine trees in the western part of the Himalayas, Spain, and China19, 35. To our knowledge, this is the first report of these three genera of endophytic fungi isolated from Pinus oocarpa in Honduras. 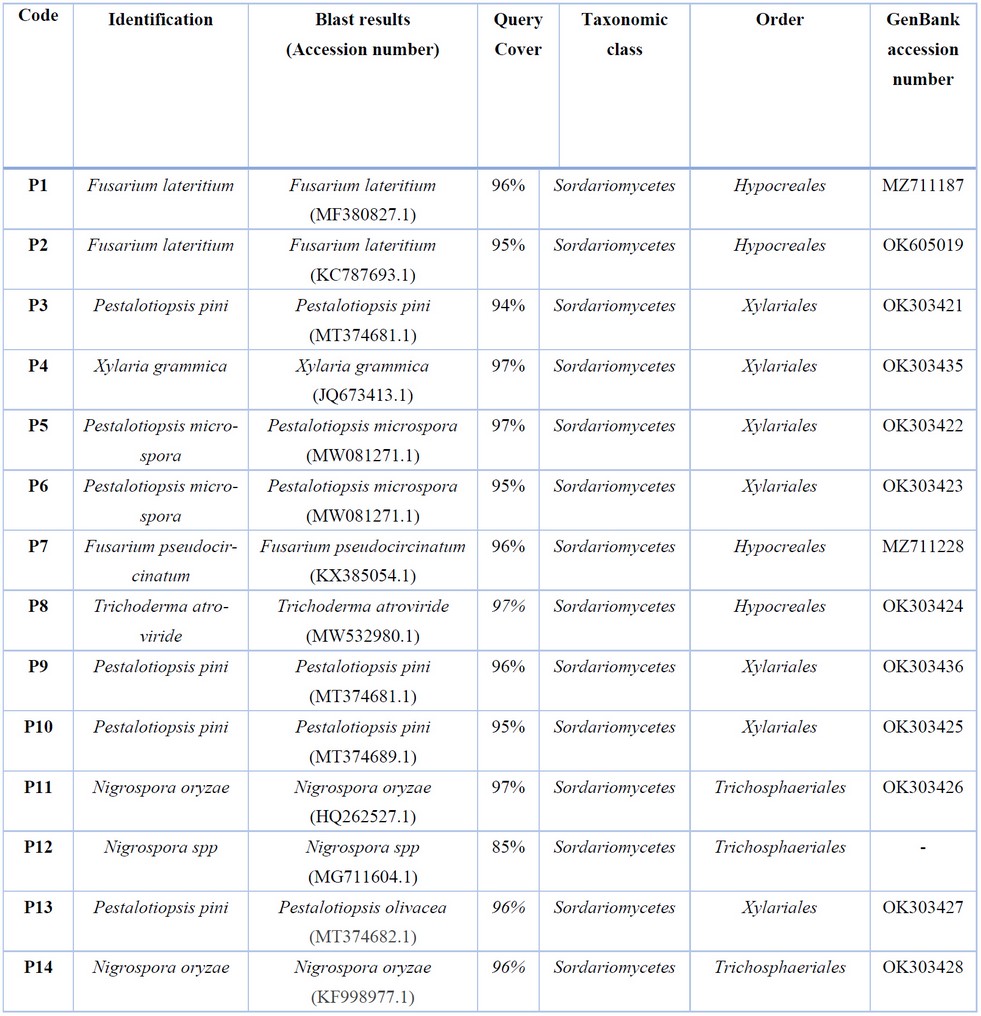