Previous / Index / Next
Response of some rice cultivars (Oryza sativa L.) to spraying with a natural honey solution and effect on growth and yield characteristics 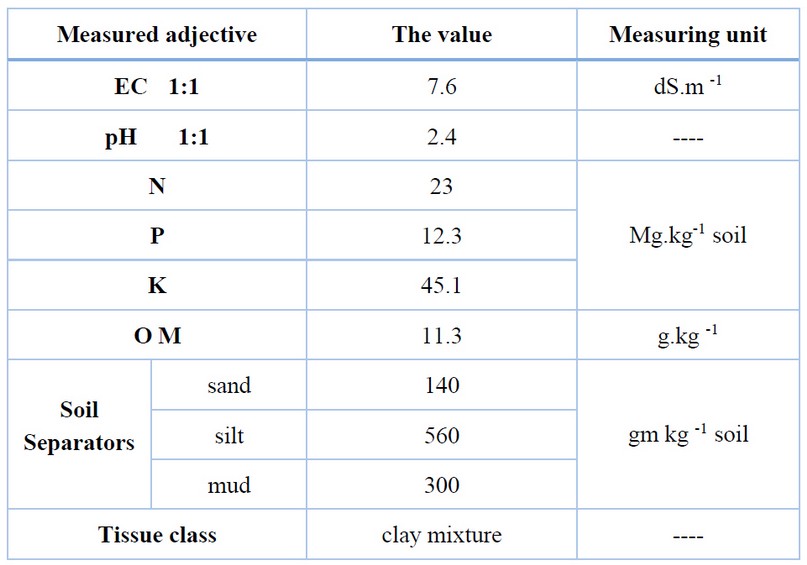 Table 1. Analysis of the physical and chemical properties of field soils.

Table 2. Some measured characteristics of the honey used for the experiment (eucalyptus honey)
The characteristics were studied
After completing the experiment, the following characteristics were studied:
Plant height (cm): According to the size of the plant, when the maturity was complete from the surface of the soil to the end of the panicle as the average of a sample of (10) plants.
Number of branches carrying panicle (branch per m2): The average number of branches carrying the panicle per square meter was calculated for each treatment.
Number of grains in a panicle (grains per panicle): The number of grains in the panicle was calculated as the average of a sample of (10) plants at harvest.
Panicle length (cm): The panicle length was measured from the beginning of the panicle (at the last node of the branch) to the end of the panicle and it was calculated as an average of a sample of (10) plants.
Weigh 1000 grain (g): 1000 grains of each sample were counted for each of the different treatments and were weighed by a sensitive scale after maturation and were calculated as an average of the sample consisting of (10) plants.
Grains yield (t.ha-1): The yield was calculated after harvesting of a square meter of each experimental unit, the weight of the grains per meter was taken then it was converted to tons per hectare (Araullo 1976)[9].
Fertility percentage (%): The fertility ratio was calculated by the following equation 10 :

After recording all the data, the results were compiled and analyzed using the statistical program Genstat, and the averages were compared using the least significant difference (LSD) test at a probability level of 0.05.
RESULTS AND DISCUSSION
Effect of cultivars on the growth and yield of rice plants
The results in Table (3) show that the difference of cultivars had a significant effect on the growth characteristics and yield that were measured in this study, as the Amber 33 variety was superior in giving the highest average of plant height, number of grains in the panicle, the length of the panicle and the weight of 1000 grain, which amounted to 118.47 cm, 479.66 grain .panicle-1 and 52.66  cm and 20.05 g for the traits preceding the succession, so the percentage increase was 72.5%, 19.5%, 39.8%, and 9.4% for the traits respectively compared to the Mashkab1 cultivar, followed by the cultivar Jasmine, which recorded the highest average number of branches bearing panicle, the percentage of fertilization and grain yield, which amounted to 357.33 Branch per m2 and 12.17  % and 4.624 t.ha-1 respectively, achieving an increase in the average of the traits by 24.6%, 48.2% and 57.1% for the above traits respectively. While the cultivar Miskhab1 recorded the lowest average for most of the traits under study compared to the rest of the cultivars. The variation in the response of the studied traits may be due to the genetic factor of each variety, which is reflected in the plant's behavior towards standards and growth factors, as one of the most important factors that determine the behavior of living organisms is the genetic factor in which the response to different growth factors varies. Several studies have confirmed the cultivar factor. It had a significant effect on the plant response and its reflection in the most important traits, such as yield. 11 indicated that the cultivars significantly affected the studied traits and varied in the various characteristics. Anbar 33 cultivar gave the highest values ​​for plant height compared to the rest of the cultivars in the study. 12 also mentioned that there is a significant effect of cultivars that was reflected in the most critical studied characteristics, including plant height, fertility rate, dry weight, number of panicles, number of grains in panicle, grain weight and grain yield, and attributed this to the influence of the genetic factor on the behavior of the plant and its response to various growth factors.

Table 3. Effect of cultivars on growth characteristics and yield of rice
Effect of spraying with different levels of honey solution on growth characteristics and yield of rice
The results in Table (4) show that there is a significant effect of the levels of spraying with natural honey solution, as the spraying treatment with concentration (6 g.l-1) achieved the highest averages for all growth traits and the result in this study, it reached 96.66 cm, 415.66 branches per m2, 545.11 grains per panicle, 46.56 cm, 20.32 g and 4.335 t.ha-1 14.53% for plant height, number of branches carrying panicle, number of grains in panicle, panicle length, the weight of 1000 grain, grains yield and fertility percentage respectively, achieving an increase of 25.4%, 84.6%, 79.3%, 24.7%, 14.0%, 24.9% and 119.2% for the traits respectively, compared to the control treatment, which recorded the lowest averages for all the traits under study. This was followed by a concentrated spray treatment (4 g.l-1). The reason for the positive effect and the increase in the average traits treated with the natural honey solution is a result of that it contains nutrients and materials important in increasing growth, as honey contains sugars, vitamins, minerals, enzymes and organic acids [13], as the presence of such materials may increase the growth rate. The activity and effectiveness of the plant in the representation of raw materials and the manufacture of its food are reflected in the increase in growth and yield. 14 indicated that honey could be used as a nutritious bio-fertilizer alone or accompanied by another fertilizer to give good results.

Table 4. Effect of levels of honey solution on growth characteristics and yield of rice.
Effect of interaction between cultivars and honey solution on growth characteristics and yield of rice
The results in Table (5) show that there is a clear significant effect of the interaction combinations between rice cultivars and the different levels of spraying with a natural honey solution, as the variety Amber 33 achieved the highest values ​​of averages in most of the traits under study, except for the grain yield in which the combinations of Jasmine cultivar excelled. The treatment of spraying honey solution with a concentration of 6 g.l-1 on the Ambar 33 variety gave the highest averages for plant height, the number of branches carrying the panicle (equally with the Mashkhab 1 cultivar with the same concentration), the number of grains in the panicle, the length of the panicle, the weight of 1000 grain, and Fertility percentage (equally with the Jasmine cultivar with the same concentration). They were 129.33 cm, 424 branches per m2, 621.67 grains per panicle, 57 cm, 21.62 g and 16.44% for the traits, respectively. Thus, achieving an increase of 67.7%, 88.3%, 104.5%, 52.7%, 21.3% and 148% for the traits, respectively, compared to the control treatments (average of cultivars with a concentration of 0g.l-1of honey solution). As for the yield, the treatment of spraying the cultivar Jasmine with a concentration of 6 g.l-1 with an explanation of natural honey was superior by giving the highest average grain yield, which amounted to 5.054 t.ha-1, with an increase of 45.6%. Whereas the lowest values ​​for the averages of the studied traits were recorded when spraying with distilled water only on the cultivar Mashkhab1 in all traits except for the number of branches carrying panicles. The mean decreased to the lowest level for all characteristics. 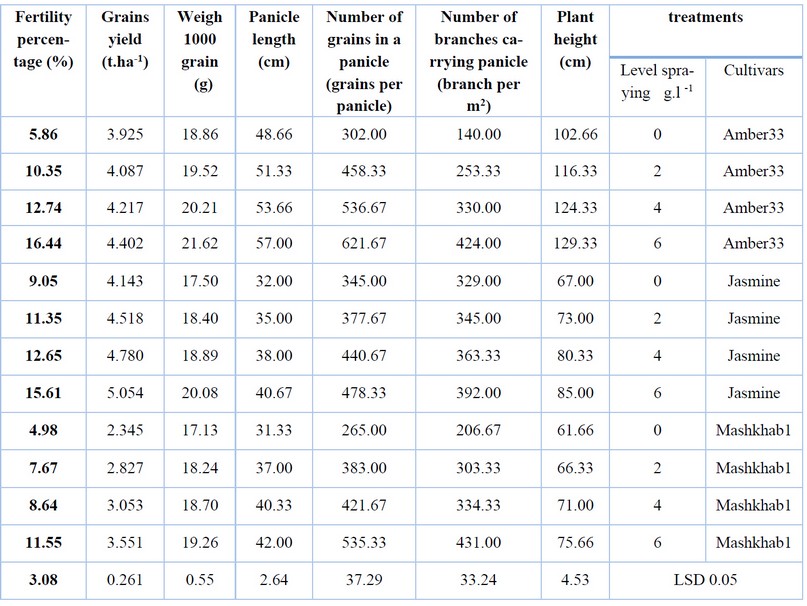 Table 5. The effect of the interaction between levels of honey solution and cultivars on growth characteristics and yield of rice
The percentage of decrease was for plant height, number of grains in the panicle, panicle length, weight of 1000 grain, grains yield and fertility percentage were 20%, 12.8%, 16.1%, 3.9%, 32.4% and 24.9% for the traits, respectively, compared to the control treatments. The reason for the distinctiveness of the treatments of the mixtures of spraying the honey solution with a concentration of 6 g.l-1 on the plants of the cultivar Anbar in most of the studied traits is the result of the cultivar responding positively to the spray with this concentration as a result of what the solution contains of nutrients, since honey contains important basic and secondary nutrients in  The vital processes within the plant, thus increasing the representation and production of food for the plant, increasing the division and expansion of cells, and this is what was observed through the data of the experiment.
CONCLUSIONS
Genetic traits play a major role in responding to the different growth factors of all organisms, especially plants, so specialists have been breeding plants to produce varieties that have the ability to give the highest production in conditions that are not ideal for growth through the use of methods of selection and hybridization or the introduction of new varieties with distinctive characteristics, as well as the use of  Natural substances are added to the plant in order to raise the efficiency of representation in the plant and thus be an integrative process between the genetic and environmental factor of a plant, and through the data of this study we can conclude that the Amber variety was distinguished by giving the highest averages for most of the traits under study, while the Jasmine variety was distinguished by giving the highest yield when spraying. The plant was treated with a honey solution with a concentration of 6 g.l-1. In contrast, the cultivar Mashkhab 1 recorded the lowest averages for the studied traits. Based on the foregoing, we can recommend the use of honey solution at a concentration of 6 g.l-1 on rice plants of the two cultivars Amber and Jasmine at a rate of five sprays during the growing season. We also recommend the introduction of other varieties and crops in such experiments in which the honey solution was used alone or as a supplement as a fertilizer for the crop.
Funding: This research received no external funding
Conflicts of Interest: The funders had no role in the design of the study; in the collection, analyses, or interpretation of data; in the writing of the manuscript, or in the decision to publish the results.
REFERENCE
1.        Hassan, Saad Falih.  Rice Cultivation and Productivity in Iraq. Guidance leaflet from the General Authority for Extension and Agricultural Cooperation - Ministry of Agriculture – Iraq. 2011.
2.         The outcome of the Arab Organization for Agricultural Development. Arab Agricultural Statistics Yearbook, League of Arab States. 2019.Volume 39. http://aoad.org/AASYXX.htm
3.         El-Hakim, A.H.  Evaluation report for SRI program implemented by CHF in Muthanna province, Iraq, Report for Ministry of Agriculture, Baghdad. 2009.
4.         KhushG S. Challenges for meeting the global food and nutrient needs in the new millennium. 2001.  Proc Nutr Soc, 60: 15–26.
5.         Younis, Abdel Hamid Ahmed.  Production and improvement of field crops, first part. Cereal and legume crops. Ministry of Higher Education and Scientific Research. 1993. University of Baghdad - College of Agriculture.
6.         Bogdanov, S.;  Jurendic, T.;  Sieber, R.;  Gallmann, P.. Honey for nutrition and health: A review. Am.  J. Coll. Nutr. 2008. 27:677–689.
7.         Alvarez-Suarez, J.M.;  Tulipani, S.;  Romandini, S.;  Bertoli, E.;  Battino, M.. Contribution of honey in nutrition and human health: A review. Mediterr.  J. Nutr.  Metab. 2010.  3:15–23.
8.         Eteraf-Oskouei, T. and Najafi, M., Traditional and modern uses of natural honey in human diseases: a review. Iranian journal of basic medical sciences, 2013. 16(6), p.731.
9.         Araullo ,E.,D .B Depadue , and M.C . Graham. Rice post harvest technology . Soil plant physiology . 1976. 26: 253-256.
10.      Al-Taie, A.A.K.. Effect of harvest dates on yield quality of some rice cultivars (Oryza sativa L.). Master Thesis- Department of field crop Sciences University of Baghdad - College of Agriculture. 2000.
11.      Al-Saadi, Iman Lazem Ramadan and Al-Amri, Shader Abdel Hamza Imran.  Effect of gibberellin acid on the growth of three local varieties of rice, Oryza sativa L.. Kufa Journal of Agricultural Sciences. 2014.vol.  6, p.  3, pp. p.  1-20.
12.      Al-Jubouri, Falih Abed Jaber, Khader Abbas Hamid, Ayed Kazem Masir.  Evaluation of the use of liquid organic fertilizers in fertilizing rice. Al-Qadisiyah Journal of Agricultural Sciences. 2015.Volume 5, Issue 1, pages 64-77.
13.      Rapuntean, S., Dezmirean, D.S.  and Fit, N.I., The effect of honey and some plant extract on unicellular algae from Protothecagenus. Bulletin USAMV-CN. 2007. 64(1-2): 277-282.
14.      El-Hanafy, S., A pilot study to exploring the effects of bee honey as a bio-fertilizer on the morphological features and chemical constituents of Syngonium podophyllum plants. Journal of Productivity and Development. 2007. 12(1): pp.299-314.
Received: August 25, 2022 / Accepted: October 12, 2022 / Published:15 November 2022
Citation: Jabbar A F; Alawadi H F. Ali, EAHM.Response of some rice cultivars (Oryza sativa L.) to spraying with a natural honey solution and effect on growth and yield characteristics. Revis Bionat a 2022;7(4) 45. http://dx.doi.org/10.21931/RB/2022.07.04.45
Back to content