Previous / Index / Next
Efficacy of Bio-fertilizer and Chemical Fertilization on Flavonoids Distribution in Different Plant Parts of Stevia rebaudiana (Bertoni.)

Ziena M.Abdul-Qader1; Kareem M.Rabie2 and Huda S. Husni3
1 Medicinal and Aromatic Plants Research Unit, ,College of Agricultural Engineering Sciences, University of Baghdad. Iraq
2 Department of  Horticulture and land scape design, College of Agricultural Engineering Sciences,University of Baghdad.
3 Department of Pharmacognosy, Baghdad college of Medicinal sciences.
* Correspondence: Ziena M.Abdul-Qader. e-mail: zinakinan@coagri.uobaghdad.edu.iq; 07901431274
Available from: http://dx.doi.org/10.21931/RB/2022.07.02.20
ABSTRACT
This study aims to investigate the effect of the biological and chemical fertilizers on the content of the flavonoid compounds distributed within the different plant parts (leaves, stems, branches, and roots) of Stevia rebaudiana (Bertoni.)  grown in Iraq. The results showed that the treatments of the biological fertilizers, including Mycorrhiza (C2) achieved the highest content of the most flavonoids in different parts of the plant. The treatment C2 recorded a rise of the flavonoid compounds Naringin, Naringenin and  Luteolin 7-glucose in the leaves, Naringin, Rutin, and Acacetin7-neorutinoside in the stems and branches, and Apiening6-rhamnose8- glucose, Apigenin7-o neohespiroside, Kampferol3-7dirmmoside, Quercetrin, Narengenin, Acacetin7-neorutinoside, Kampferol, and Luteolin 7-glucose in the roots. On the other hand, treatment C1 recorded the highest content of Quercetin in the leaves, Quercetrin3-O glucose in the stems and branches, and Quercetrin3-O glucose, Naringenin, and Acacetin7-neorutinoside in the leaves .
Keywords. Flavonoid, Stevia, Mycorrhiza and chemical Fertilization
INTRODUCTION
Flavonoid compounds are among the most significant secondary metabolic compounds naturally produced by plants. They consist of more than 1000 structurally varied compounds1.2.Half of the flavonoid compounds are accumulated in the plant vacuoles as a form of aglycone, glycosides, and methylated derivatives. Some flavonoids are released from roots to the aria surrounding the roots, known as rhizospheres. Some flavonoids can release from roots and make biological contact with the microorganism in the rhizospheres and establish a symbiotic relationship with them, such as rhizobia, arbuscular mycorrhizal fungi, and plant growth-promoting rhizobacteria, Pathogens, and nematodes in addition to some other plants. This has been confirmed by finding aglycones and glycosides in the flavonoid compounds, the root extract, and the soil containing these organisms3.4.5. Stevia rebaudiana is classified among the perennial herbaceous plants of the Asteraceae family. It is a medicinal and nutritional plant that has gained particular nutrient and healthy importance in terms of nutrition and health for its leaves containing Steviol Glycosides that led to using the plant leaves as calorie-free food additives in Japan, Brazil and Europe6.7.Containing a group of flavonoid compounds essential for the human body as antioxidants that have a role in protecting against cancer, diabetes and diseases of cardiovascular and kidney, increased the importance of Stevia as a medicinal plant; furthermore, it is considered a fungal and bacterial antibiotic and it is used as a diuretic as well as it has many other benefits 8.9. Creating biologically activated compounds in plants is affected by various environmental and agricultural factors, including fertilizers such as NPK10. Flavonoid contents in plant tissues of plant parts were increased when the chemical fertilizers were used while other research proved the revers11.12.13.14. 15. 80% of plants can form a symbiotic relationship with the mycorrhiza fungus16. Mycorrhiza is one of the bio-fertilizers characterized by the capability to increase the secondary metabolism compounds in plants, and 80% of plants have the ability to form a symbiotic relationship with the mycorrhizal fungus16.17. Adding Mycorrhiza to medicinal plant roots changed primary metabolism processes, including photosynthesis, water absorption, and plant tolerance to drought 18. In addition, the changes in secondary metabolism compounds such as the change in the dynamics of plant hormones and the structural manipulation and activating the defensive mechanism19..The reason was attributed to the excellent compatibility between the Mycorrhiza and the host plant, As well as the nutritional status of the plant. This increased the plant content of secondary metabolites such as phenols and total flavonoids 20.
Due to  the nutritional and medicinal importance of the Stevia plant and the absence of studies about it in Iraq, this research aims to probe the effect of the chemical and biological fertilizers on the content of flavonoid compounds in different parts of the Stevia grown in Iraq
MATERIALS AND METHODS
The experiment was conducted in the greenhouse at research station B affiliated with the Department of Horticulture and Garden Engineering, College of Agricultural Engineering Sciences, the University of Baghdad during the period from 1/3/2017 to 15/7/2017. The design Randomized Complete Block Design (RCBD) was used to lay out this experiment with three replicates. Each replicate contained 10 plants 6 weeks old, knowing that the seedlings had been produced through the tissue culture and been adapted previously. The experiment treatment included: Control treatment: without applying any fertilizer. C0 symbolizes it. Chemical fertilizer treatment: according to the NPK fertilization recommended 21 where the fertilizer contains the combination of 30 N: 10P: 10K. The treatment was symbolized by C1. Biological fertilizer treatment: the Glomus mosssaea was added at 15 g .plant-1 in the pits in contact to the seedling roots 22 and 250 g.plant-1 of sterilized Peat moss23. The Mycorrhizae were obtained from the Ministry of Sciences and Technology, Department of Agricultural Research. It was loaded on the soil at 51 spores. g-1 soil. C2 symbolized the treatment. The seedlings were planted on terraces of 50 cm in width in a non-warmed greenhouse covered by polyethylene. The distance between plants from each other was 20 cm24. Inside the greenhouse was equipped with a thermometer and a hygrometer, also was equipped with non-woven polypropylene spun bounded (characterized by thickness GSM 17 and UV3%) was placed 2.5 m above the plants to decrease the temperature 25 (Table 1) 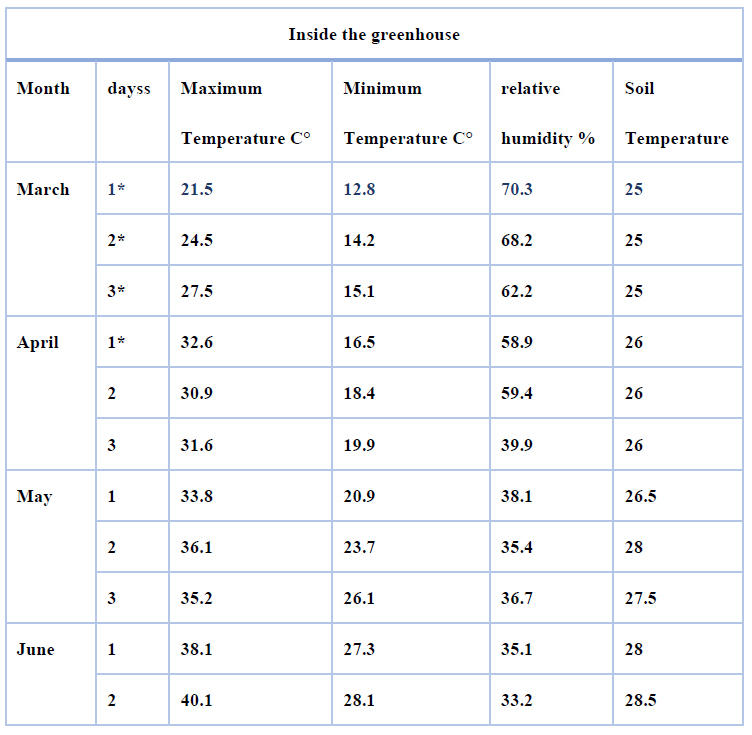 * (1) The average of the first ten days of the month .* (2) The average of the second ten days of the month.* (3) The average of the last ten to eleven days of the month.
Table 1. Maximum and minimum temperature (C°) and relative humidity (%) as well as the soil temperature inside the greenhouse
Estimate the concentration of the flavonoid compounds in different plant parts(roots, stems and leaves)
The flavonoids concentration was estimated with High-Performance Liquid Chromatography (HPLC) according to 26 included the following steps:
Extraction and separation of flavonoids
When leaves reached the full enlargement stage preceding the flowering and after the last batch of the soil NPK fertilization, samples including the leaves, stems, branches, and roots were collected separately after the first harvest in the evening in order to analyze the flavonoid compounds. The plant parts were dried at the room temperature of 25-30 C° until the weight stabile in a room equipped with an evacuator. The samples were ground using a special industrial grinder and kept in airtight paper bags. The bags were also placed inside sealed zipper freezer bags (type Falcon) for food preservation. Then, they were kept in a refrigerator under 4-5 C°. The sample extraction was prepared according to 26. The standard solutions of the compounds studied were imported from the Sigma- Aldrich Co.
The device conditions
All concentrations of flavonoid compounds in the Stevia plant were assessed at the National Agricultural Research Center laboratories - Food Technology Research Institute / Arab Republic of Egypt. The Chromatography approach was used to estimate the compounds of flavonoids studied . HPLC device (type Agilent, model 1200) was used for determining the retention time and area of the standard and sample solutions. The separation column type C18 (4.5 x 250 mm) was used, and the movable phase acetonitrile: Phosphoric acid was pushed (at a Flow rate 14: 80 ml.min-1). The results were measured at the wavelength of 330 nm and a temperature of 35C°. Next, the measurements of the compounds of the package space of the samples were compared to those the standards to recognize the compounds Apiening6-rhamnose-glucose, Naringin, Rutin, Quercetrin 3-O glucose, Apigenin7-o-neohespiroside, Kampferol3-7dirmmoside, Quercetrin, Quercetin, Naringenin, Acacetin7-neorutinoside, Hespirtine, Kampferol, Apeginen, and Luteolin 7-glucose according to the approach followed by 26
Statistical analysis
The experiment was designed using the Randomized  Complete Block Design (RCBD) with three replicates for each treatment27. Genastat software was used to compare the means relying on the L.S.D 5 %.
RESULTS
Effect of the chemical and biological fertilizers on the flavonoid content in Stevia plant leaves (ppm)
Results in Table 2 show non -significant effect of the chemical fertilizer treatment C1 and the biological fertilizer treatment C2 compared to the control treatment on the compounds Apiening6-rhamnose8-glucose,Rutin,Quercetrin 3-O glucose, Apigenin 7 glucose, Apigenin7-o- neohespiroside, Kampferol3-7dirmmoside, Acacetin7-neorutinoside, Hespirtine, Kampferol, and Apeginen. The treatment of the biological fertilizer C2 showed superiority in the leaf content of the flavonoid compound Naringin reached 1669.7 ppm compared to the C1 and C0 (1430.5 and 978.6 ppm), respectively. The treatment C2 was superior in the content of Narengen in the Stevia plant leaves (32.6 ppm) compared to C0. (13.4 ppm) . The treatment C2 also showed superiority in the plant leaf content of Luteolin 7-glucose (5670.5 ppm) compared to C1 and C0 (1562.3 and 1665.0 ppm, respectively). The treatment C1 recorded the highest value of Quercetin in the leaves (58.6 ppm) compared to the treatments of C2 and C0 (39.77 and 34.84 ppm, respectively).
Effect of bio and chemical fertilizers on the flavonoid compounds content of S. rebaudiana (Bertoni.) leaves (ppm) Table 2 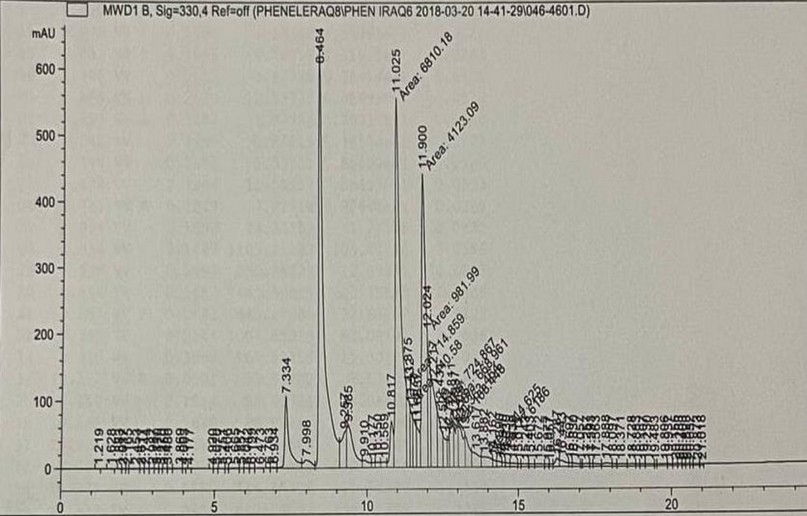 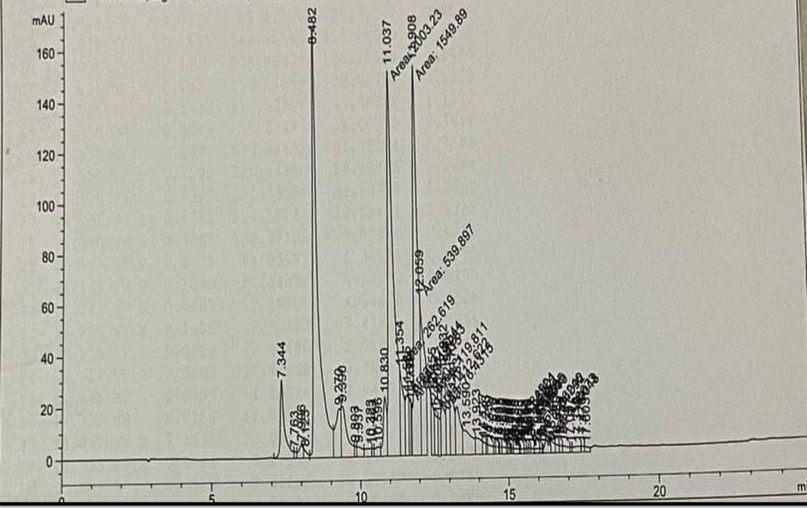 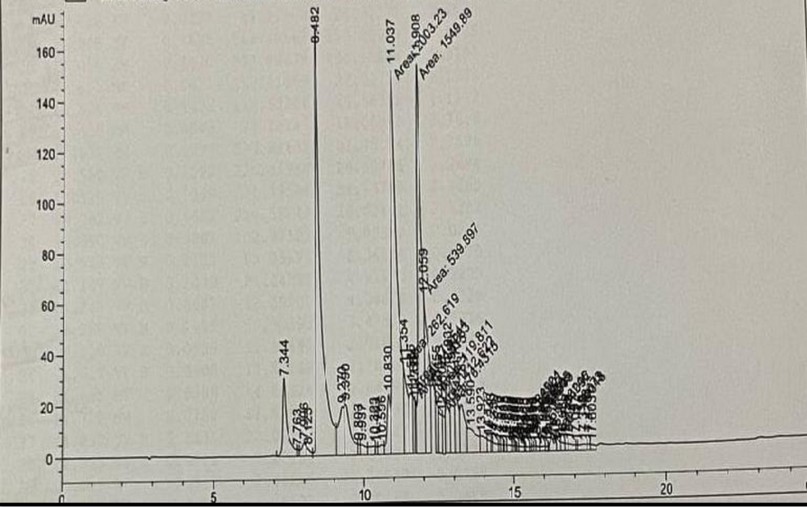 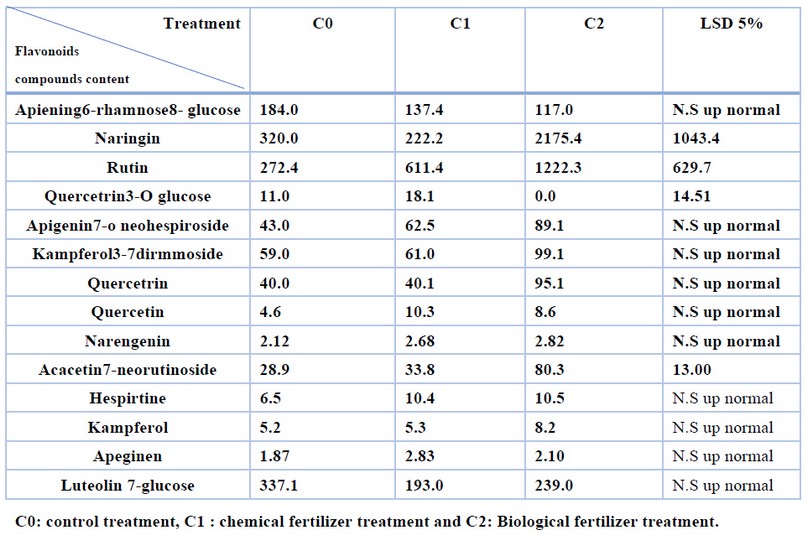 Table 3. Effect of bio and chemical fertilizers on the flavonoid content in the stems and branches of S. rebaudiana (Bertoni.) (ppm). 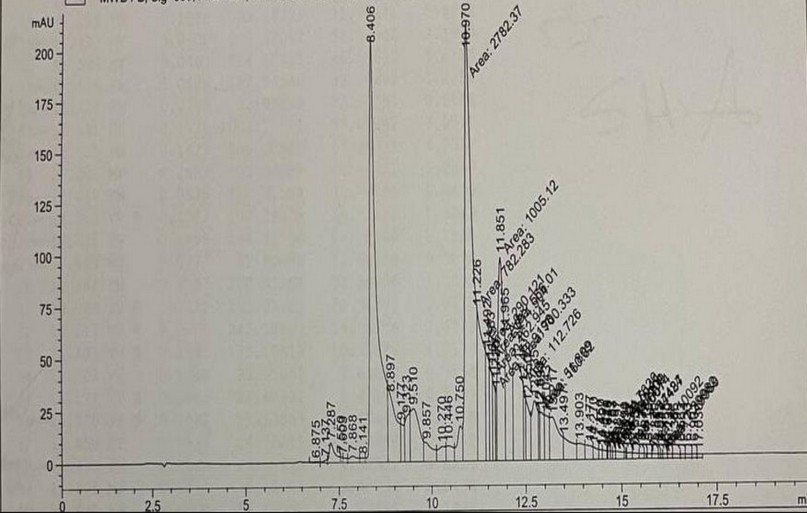 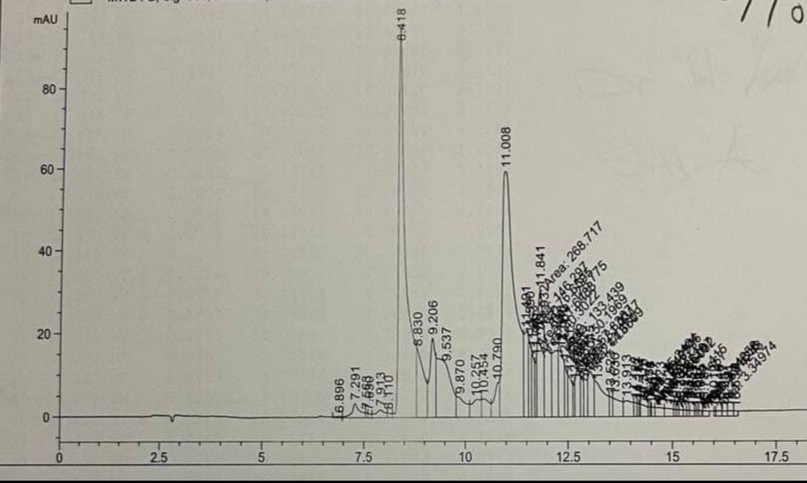 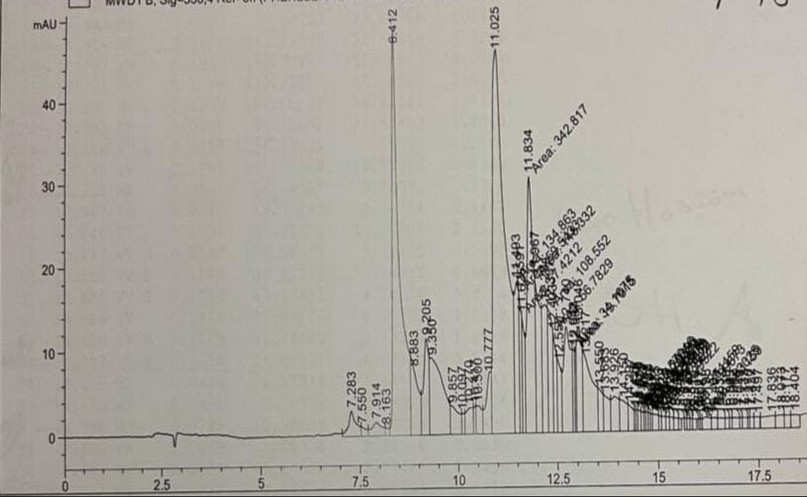 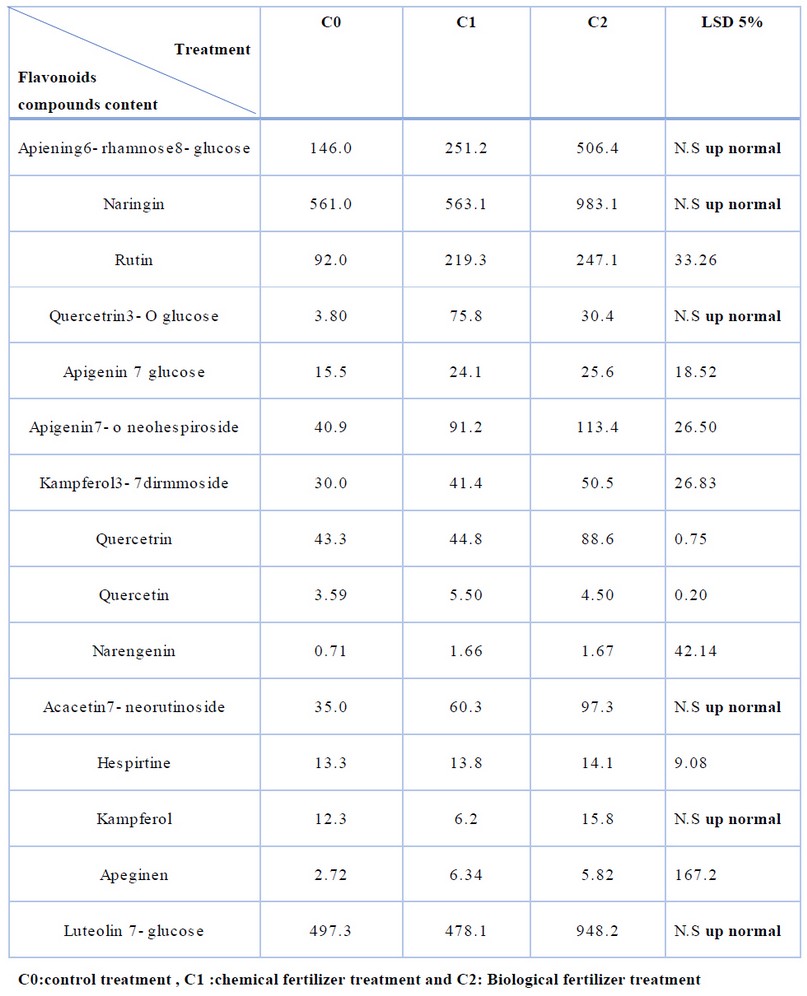