College of Biotechnology, AL-Nahrain University, Bagdhad-Iraq.
* Correspondence: nedhaal@yahoo.com or nedhaal.suhail@nahrainuniv.edu.iq
Available from: http://dx.doi.org/10.21931/RB/2022.07.01.28
ABSTRACT
The most prevalent metabolite for the storage and transport of nitrogen used in protein production is L-asparagine; in earlier studies, L-asparaginase enzyme derived from microorganisms was utilized to treat cancer cells; therefore, this study aimed to purify and describe this enzyme derived from Iraqi green bean seeds rather than microbial sources. The enzymes were partially purified from green beans by short steps, including centrifugation of crude enzyme, dialysis by Diethylaminoethyl Sepharose Column, and equilibrated using 20 mM Tris-HCl buffer, pH 8.0, and then applied to a sephacryl S-200. Coulometric methods measured the enzymatic activity at 450 nm, and the unit of activity was calculated by comparing it to a standard curve. Purification of L-asparaginase yielded a 5 percent yield, a 2.7 fold increase in activity, and a 43 unit/ml activity. The pH of asparaginase was optimal at 8.0. After a one-day incubation period, this enzyme became more stable at pH levels ranging from 7.5 to 9.5. This enzyme had the same optimal temperature and thermal stability at 40°C, but it was more stable at temperatures ranging from 20 to 40°C, allowing it to retain its maximal activity.
Keywords. asparaginase , phaseoulus vulgaris, leukemia
INTRODUCTION
In plants, L-asparagine is the most abundant metabolite for the storage and transport of nitrogen that is utilized in protein biosynthesis. Borek1 pointed out that there are two known routes for L-asparagine metabolism for storage and transport of nitrogen utilized in protein synthesis. The first route, catalyzed by asparaginase, involves the hydrolysis of L-asparagine to release ammonia and L-aspartate. The second route involves the transamination of  L-asparagine (in the presence of an oxo-acid) to form 2-oxosuccinamic acid and appears to be important in green leaves where it may play a role in photorespiration2. Lymphoblastic leukemia and non-Hodgkin's lymphoma were treated by L-asparaginase 3. This enzyme catalyzes the conversion of  L-asparagine into L-aspartate and ammonia, and this catalytic reaction is irreversible under physiological circumstances4. Asparaginase discourages protein production in cancer cells by forbidding them of the amino acid asparagine. First enzymatic hydrolysis of  L-Asparagine to L-Aspartate and ammonia were reported by Lang5, who noticed L-Asparaginase activity in several beef tissues. L-Asparaginase has attracted much attention in both food industrial and pharmaceutical applications. In the food industry, L-Asparaginase was used to eliminate acrylamide from different processed foods using pretreatment of L-Asparaginase to degrading L-asparagine, the precursor of acrylamide, before baking6.
MATERIALS AND METHODS
Plant-Based Materials
The local Baghdad market provided mature green beans (Phaseolus vulgaris). Purification of Asparaginase.
Crude Extract
Asparaginase extract in its most proper form was made by homogenizing 100g of green bean in 20 mM Tris-HCl buffer, pH 8.0 (including 1 mM PMSF, 12.5 mM -mercaptoethanol, 50 mM KCl, and 10% glycerol), spin at 10,000 rpm, and the crude extract was the name given to the supernatant7.
Diethylaminoethyl Sepharose Column
The dialyzed crude extract was put to a 16 * 1.5 cm Diethylaminoethyl-Sepharose column that had been equilibrated before use with 20 mM Tris-HCl buffer, pH 8.0. Different concentrations of NaCl produced within a single buffer at a 1 mL/minute flow rate were used to elute the enzyme, and 3 mL fractions were collected.
Sephacryl S- 200
Choose the elutions (fractions) from the previous step's peak that have the highest activity and apply them to a sephacryl S-200 (2.6*83cm) column equilibrated with Tris-HCl at a flow rate of 0.5/minute, collecting 3.5 ml fractions
Asparaginase assay
The enzyme test reaction mixture contains 0.5 milliliters of pH 8.0 Tris-HCL buffer, 0.5 ml of 100 mM L-asparaginase substrate, 0.5 milliliters of each crude enzyme, and distilled water. The reaction mixture was then incubated for 30 minutes in a water bath at 37°C. After the reaction had been incubated, point five milliliters of Trichloroacetic acid (TCA) was added to stop it. To determine nitrogen present in a sample8, 0.1 ml of the reaction mixture was added to 3.7 ml of distilled water in a separate test tube, followed by 0.2 ml of Nessler reagent. The absorbance was measured at 450 nm, and the unit of activity was calculated by comparing it to a standard curve.
Characterization of asparaginase
Effect of pH
The best pH for asparaginase activity was discovered by measuring the enzyme's activity at various pH levels. The pH stability of the enzyme was assessed by incubating it in a pH range of 5.0–10.0 for 24 hours at 4°C, and the residual activity was determined under standard assay conditions.
Effect of Temperature.
Asparaginase activity was measured at several temperatures to determine the optimum temperature. Heat stability was determined by incubating the enzyme alone for 1 hour at various temperatures. The enzyme solution was brought to room temperature following heat treatment, and the enduring activity was measured after adding the substrates.
RESULTS
Table 1 was shown the findings of asparaginase purification processes from Iraqi Phaseoulus vulgaris . Figure (1) depicted the DEAE-Sepharose column chromatography results, exhibiting three protein peaks. A Sephacryl S-200 column was used to apply peak one, which had the highest asparaginase activity. This is the last stage in the purification process and results in a single peak of the pure enzyme, as shown in Figure (2). With a specific activity of 143 units/mg protein, L-asparaginase was purified 2.7 times. After passing through the Sephacryl S-200 column, the asparaginase was found to be pure. The optimum pH for asparaginase activity was 8, as in figure (3). 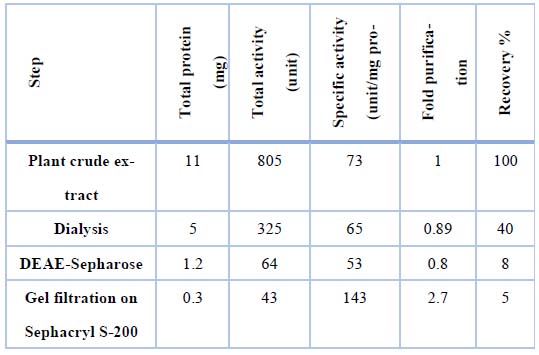 Figure 1.  Chromatography of asparaginase from green beans on DEAE-Sepharose (16 × 1.5 cm) already to bring to balance with 20mM Tris-HCl, pH 8.0 at a flow rate of1ml/min. and 3mL fractions.

Figure 3. Optimum pH of the enzyme from green bean. Asparaginase activity was measured at different pH.
At alkaline pH, the asparaginase enzyme was found to be stable. When enhancement for 24 hours as in a frame, pH fluctuated between 7.5 and 9.5 since it used 90% of its activity (4). However, the pH optimum of L-asparaginases from a few plants was shown to be between 8.0 and 8.510. Almost L- asparaginases from bacteria have alkaline pH optimum values of 8.0 to 1011.

Figure 6.  Stability temperature of asparaginase produced from Phaseolus vulgaris
DISCUSSION
Any deviation in pH from the optimum induces ionization of R-groups of amino acids, which reduces enzyme activity; between pH 7.0 and 9.5, overmuch half of the enzyme's activity level was preserved. Even though the most significant activity at physiological pH is one of the requirements for anticancer activity in such enzymes, the revised enzyme would be feasible because 80 percent of the enzyme activity was retained at pH 8. Enzymes, like other proteins, are only stable across a narrow pH range. Changes in the charges on ionizable residues outside of this range lead to alterations to the protein's tertiary structure, which finally leads to denaturation9. At alkaline pH (pH 7.5–9.5), asparaginase appeared firm, as it employed 90% of its activity after being incubated for 24 hours, as shown in figure 4. However, the optimum pH of L-asparaginases from various plants ranged from eight to eight-point five10. Alkaline pH optima were found in nearly all L-asparaginases from bacteria, ranging from 8.0 to 1011. ‎According to Ali12, the optimum temperature for the asparaginase enzyme produced by Vigna unguiculata was 40°C, and the optimum temperature for such enzyme produced by pseudomonas aeruginosa was similarly 40°C, as mentioned by13. Denaturation of the enzyme occurs when the protein's three-dimensional structure is destroyed, resulting in the creation of random polypeptide chains as the temperature rises. This produces a change in the active site, rendering the enzyme inactive at high temperatures14. Pseudomonas acidovorans glutaminase decreased roughly 50% of its activity after being incubated at 50°C for 10 minutes, according to Davidson15. In contrast, Koibuhi16 and Daiwa17 found that glutaminase from B. subtilis kept all its activity after one hour of incubation at 50°C. ‎‎ In another bacterial enzyme, the Optimum optimal temperature for activity was 37°C, but the stability of chondroitinase was maintained 100% at 20–40°C for 30 min 18. As the temperature rises, enzyme activity may decrease, resulting in denaturation, which entails the loss of the protein's three-dimensional structure and the formation of random amino acids.
CONCLUSIONS
The enzyme L-asparaginase was isolated from Iraqi green beans so that any potential adverse effects could be ruled out if anticancer therapy is investigated. Asparaginase showed good consistency across various physiological environments, including pH and temperature. We should investigate asparaginase as cancer or leukemia treatment in the future. ‎
Funding: This research was funded by self
Acknowledgments: I would like to extend my thanks and gratitude to the all who support us.
Conflicts of Interest: None
REFERENCES
1.      Borek D, Michalska K, Brzezinski K, Kisiel A, Podkowinski J, Bonthron DT, Krowarsch D, Otlewski J, Jaskolski M. Expression, purification and catalytic activity of Lupinus luteus asparagine β‐amidohydrolase and its Escherichia coli homolog. European journal of biochemistry. 2004 Aug;271(15):3215-26.
2.      Joy KW. Ammonia, glutamine, and asparagine: a carbon–nitrogen interface. Canadian Journal of Botany. 1988 Oct 1;66(10):2103-9.
3.      Narta UK, Kanwar SS, Azmi W. Pharmacological and clinical evaluation of L-asparaginase in the treatment of leukemia. Critical reviews in oncology/hematology. 2007 Mar 1;61(3):208-21.
4.      Hill JM, Roberts J, Loeb E, Khan A, MacLellan A, Hill RW. L-asparaginase therapy for leukemia and other malignant neoplasms: remission in human leukemia. Jama. 1967 Nov 27;202(9):882-8.
5.       Lang S. Uber desamidierung im Tierkorper. Beitr chem Physiol Pathol. 1904;5:321-45.
6.      Hendriksen HV, Kornbrust BA, Østergaard PR, Stringer MA. Evaluating the potential for enzymatic acrylamide mitigation in a range of food products using an asparaginase from Aspergillus oryzae. Journal of agricultural and food chemistry. 2009 May 27;57(10):4168-76.
7.      Mohamed SA, Elshal MF, Kumosani TA, Aldahlawi AM. Purification and characterization of asparaginase from Phaseolus vulgaris seeds. Evidence-Based Complementary and Alternative Medicine. 2015 Jan 1;2015.
8.      Imada A, Igarasi S, Nakahama K, Isono M. Asparaginase and glutaminase activities of microorganisms. Microbiology. 1973 May 1;76(1):85-99.
9.      Zubay, G. (1993). Biochemistry (3rd ed.)., I. W. M. C. Bown Communications. Inc.USA.
10.  Khalaf ZA, Al-Ani NK, Jasim HM. Optimum conditions for asparaginase extraction from Pisum sativum subspp Jof. Iran Journal of Plant Physiology. 2012;2:517-21.
11.  Makky EA, Loh YC, Karim MR. Purification and partial characterization of a low molecular weight L-asparaginase produced from corn cob waste. Biocatalysis and Agricultural Biotechnology. 2014 Oct 1;3(4):265-70.
12.  Ali EM. Purification and characterization of Vigna unguiculata cultivar asparaginase. Journal of Biological Research-Thessaloniki. 2009 Jan 1;11:29-36.
13.  Kuwabara T, Prihanto AA, Wakayama M, Takagi K. Purification and characterization of Pseudomonas aeruginosa PAO1 asparaginase. Procedia Environmental Sciences. 2015 Jan 1;28:72-7.
14.  Segal IH. Biochemical Calculation. John Whiley and Sons. Inc. New York. 1976.
15.  Davidson LO, Brear DR, Wingard PE, Hawkins J, Kitto GB. Purification and properties of L-glutaminase-L-asparaginase from Pseudomonas acidovorans. Journal of bacteriology. 1977 Mar;129(3):1379-86.
16.  Koibuchi K, Nagasaki H, Yuasa A, Kataoka J, Kitamoto K. Molecular cloning and characterization of a gene encoding glutaminase from Aspergillus oryzae. Applied microbiology and biotechnology. 2000 Jul;54(1):59-68.
17.  Daiwa, K. K.; (2005). Glutaminase Daiwa C 100S. Enzymes. (Internet). Address: 4-19 Hie-Cho, Konan, SHIGA, 520-3203 Japan.
18.  Abdul-Gani MN, Laftaah BA. Purification and characterization of chondroitinase ABC from Proteus vulgaris, an Iraqi clinically isolate. Current Science. 2017 Dec 10:2134-40.
Received: 10 December 2021 / Accepted: 10 January   2022 / Published: 15 February 202
Citation: Suhail Zbar N. Purification and   characterization of L-asparaginase extracted from local Iraqi green beans (Phaseoulus   vulgaris). Revis Bionatura 2022;7(1).   28. http://dx.doi.org/10.21931/RB/2022.07.01.28
Back to content