Figure 1. Area of study and sampling station.
Soil samples and grain (wheat plant samples) were dried for 48 hours in an oven at 100°C. Soil samples were grounded to pass an 80 mesh (0.5 mm opening) sieve. Plant samples, on the other hand, were also ground to pass 100 mesh sieve. Ground samples were kept in tightly closed jars for radioassay and other relevant analysis. Radio assays were performed using gamma-ray spectroscopy, a high purity germanium radiation detector (HPGe) with 40% efficiency, linked to a multi-channel analyzer (MCA) 8192 channel.  Results obtained were analyzed using the analytical program Giene-2000. Calibration of the Gama Spectrometer was performed using a standard analog radiometric source from 152Eu, 60CO.
Gamma rays resulting from the decay of natural uranium, thorium, and potassium were determined based on published reports of the United Nations Scientific Committee such as 40K, 226Ra, 214B 212Pb, as well as the industrial element 137Cs. The data on radioactivity concentration in soil and grains obtained from one field were subjected to Student's t-test with the other field one to test the significance of the differences in their mean values at a 99% confidence level.
RESULTS AND DISCUSSION
The specific activity due to 238U, 232Th, and 40K in the soils collected from all the fields has been measured as shown in Table (1). The mean radionuclide contents of the two types of soil show fertilization variations and reliance on them as one of the impact factors, which is well reflected in the current study. The use of ammonium phosphate fertilizers made from the original rock-phosphate mineral in the wasit field does change the soil's radioactivity content appreciably as the difference between the average values of the fertilized and unfertilized fields is statistically significant. Previously reports by 11,12 on natural radioactivity content in soils of Iraq also confirm these results. The natural radioactivity contents obtained in the present study are within the range for acceptable limits background activity reported for soils worldwide13.
The mean activity concentration of  238U, 232Th, and 40K in fertilized soil Cultivated with the wheat plant is 27.3, 19.1, and 364 Bqkg-1, respectively, and for unfertilized soil is 19.2, 13.3, and 275 Bgkg-1, respectively. The T values of 5.33, 5.79, and 5.66 for 238U, 232Th, and 40K, respectively, being more significant than the critical T value at an alpha of 0.01 level of significance,  shows that the difference in activity concentration of naturally occurring radioactive materials in fertilized and unfertilized soil is statistically significant; thus the difference between the mean activity concentration of natural radionuclides 238U, 232Th and 40K  in fertilized and unfertilized soil may be due to increment in the rate of used fertilizers, especially phosphate fertilizer and this could also mean that agricultural fertilizers do have a significant impact on the transfer of natural radionuclides to the soil.

The mean values of activity concentrations of 238U, 232Th, and 40K for the wheat grain samples in this study were too much lower than the accepted values referred by the United Nations Scientific Committee on the Effects of Radiation Sources13. The obtained results of activity concentrations of the impressive natural radionuclides had this order  40K > 238U > 232Th; the mean concentration was highest for 40k because 40K is an essential element of living organisms; therefore, the 40K radioactivity cannot be avoided. This result is following the information presented by 14,15. The study carried out by 16 found that the specific activity in wheat flour samples are available in Iraqi markets were varied from (1.09±0.087) to (12.5±2.03) Bq kg-1 for 238U, 232Th From (0.126±0.066) to (4.30±0.388) Bq kg-1 and 40K from (41.8±5.88) to (264.729 ± 3.843) Bq kg-1. A pot experiment was carried out, and Jew's-mallow (Corchorus olitorius) is hugely a popular national Egyptian vegetable food that the Egyptians highly consume either as fresh or cooked food. Was cultivated on soil with fertilizers (NPK) and unfertilized by17 were found that the average value of the specific activity of 226Ra, 238U, 232Th, and 40K in Bq kg-1 for Jew's-mallow plant fertilized was 0.501, 0.055, 0.136, and 11.4 respectively, and Non-Fertilized it was 0.29, 0.050, 0.130 and 9.83 respectively.
The food chain implants the primary path of the radionuclides entry into the human body; thus, the intake estimation of these radionuclides is fundamental. Among all parameters applied to assessing the concentrations of the radionuclide in plants, transfer factor from soil to plant (TF) is one of the most substantial parameters utilized in models to estimate the effects of radioactive contamination on the environment. This parameter reflects radionuclide uptake through roots and can be realized as the ratio of radioactivity unit per dry crop mass to that of unit per dry soil mass18. Some factors that affect the natural radionuclides transfer from soil to plants, such as fertilization, plant species, and the soil properties19, transfer factors (TF) were calculated as the ratio of the radionuclide concentration in the plant (Bq/kg plant) to its concentration in soil (Bq/kg soil). The soil to grains transfer factor for radionuclides studied are given in  (Table 3) and compared with the default values suggested by IAEA 18.

Table 3. Transfer factor for 238U, 232Th, and 40K in wheat grain.
The overall mean transfer factor (TFs) of  238U, 232Th, and 40K from unfertilized soil to grain wheat was 0.70 × 10-3, 0.13 × 10-3, and 0.054 respectively, compared with 0.60 × 10-3, 0.11 × 10-3 and 0.055 respectively, for the fertilized field. This finding indicated that the mean value of 238U uptake is greater than that of 232Th. These differences can be associated with the difference in solubility of elements with oxidation state +II. Uranium exhibits higher solubility than thorium in water, 20reported that thorium is less mobile than uranium, which is consistent with our TF observation of 232Th and 238U; generally, 40K exhibits a higher TF value in grain than that of 238U and 232Th because K is a significant nutrient needed by the plant in large quantities21. The experimental values of the transfer factor of natural radionuclide in wheat grains grown from both types of fields unfertilized and fertilized are close to the default value suggested by the IAEA. Also, the results showed that radionuclide concentrations in grain are not linearly related to soil concentrations; these results are in agreement with that reported by22, the nearly comparable values of transfer factors for radionuclides despite their different concentration levels in soil is a result of very complex behavior of elements in the soil. 23have reported that the degree of accumulation of natural radioactive elements is affected by the metal-selective function of plants during the uptake of elements to maintain the mechanism of homeostasis in a typical environment.
People are risky to natural radiation from external sources, including radionuclides in the earth, cosmic radiation, and internal radiation from radionuclides integrated into the body and from the significant ways of radionuclide intake ingestion of food and water. An appointed denomination of exposure to internal radiation radionuclides of (uranium and thorium) decay series and 40K existing in food consumed by people leads to ingestion. The Ingestion effective dose (DG,r) related to intake of 238U, 233Th, and 40K in foodstuff samples is reflected as a radiological hazard for human health. The annual effective ingestion dose to man due to the consumption of wheat grains can be estimated to utilize the formula is below24,25.

Where DG,r is the annual ingestion dose (mSv y−1), f indicates a food type, the coefficients Uf and Af,r represent the annual intake of grain wheat (kg y-1), and the specific activity of the radionuclide (r) of interest (Bq Kg-1), respectively, and gG,r is the conversion coefficient of dose for ingestion of radionuclide r (Sv Bq-1) in tissue grain (G). For the public, the adult conversion coefficient of dose gG,r for 238U, 232Th, and 40K  are 2.8×10−7, 2.2×10−7, and 6.2 ×10−9 Sv Bq-1, respectively24. The annual intake values of wheat for adults were taken as 110 kg y-1 26.
The effective ingestion dose in (mSv y-1) for adults due to specific activity of 238U, 232Th, and 40K in wheat grain samples is calculated using Eq. above shows in (Figure 1). The overall mean summation of the Ingestion effective dose was varied from (0.041, 0.004, and 0.010) mSv y−1, respectively, to (0.051, 0.005, and 0.014) mSv y−1, for wheat grains from the unfertilized and fertilized field. Figure 2 shows the comparison between the average of the ingestion effective dose for 238U, 232Th, and 40K in wheat grain samples which obtain the average of ingestion effective dose due to 238U was higher than due to 232Th and 40K because of the increased dose conversion coefficient for ingestion of radionuclide, the total of the dose received from 238U and 232Th due to consumption of wheat grains alone from the fertilized field (0.056 mSv) shall constitute 19.6% of the unfertilized field total ingestion dose (0.045 mSv). The individual and sum total of the dose received from these radionuclides' contributions in wheat grains from two field ingestion doses are lower than the reference value 1 mSv y-1 recommended by 27. 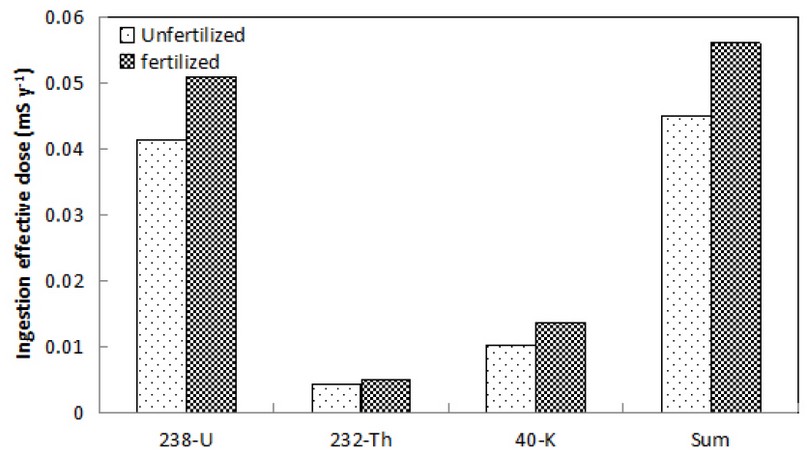