Table 1. Genealogy of genotypes and their numbers used in the study

The amount of rain falling during the growing season was (812.5 mm). The study was conducted on 10 plants randomly taken from every two lines, and the following characteristics were studied:
1-      The number of days from planting until 50% of the spikes left the flag leaf sheath.
2-       Plant height (Cm): The height of the plants was measured from the surface of the soil to the top of the ears, without the ridge.
3-       The length of the spike (Cm): It was measured from the base of the spike to the top of the spike without the spur estimated.
4-      The number of spikes/m2.
5-       The number of grains of a spike: the average number of grains in each spike were calculated.
6-      The vital yield: It represents the weight of the product of two lines (spikes + straw) and converted to kg/ha.
7-      Grain yield: This is from the yield of two lines and then converted to kg/hectare.
8-       Harvest index (%): It was calculated using the formula: Harvest index % = (grain yield/biological yield) x 100 mentioned by12.
9-      The weight of 1000 grains is estimated in grams. The data were statistically analyzed according to the randomized complete block design (R.C.B.D) using the S.A.S. program (2004); genetic, phenotypic and environmental variances were estimated according to the method explained by13 according to the randomized complete block design (R.C.B.D) as reported by10.

As for the standard error of the phenotypic variance, it was estimated according to what was mentioned by14 according to the equation:

(2)
Note that k = degrees of freedom for each source (genotypes or experimental error), r = the number of replicates, where N = the sum of the degrees of freedom for genotypes and experimental error, and the values of the coefficients of phenotypic variation (PCV) and genetic variation (G.C.V.) were calculated according to the method explained by15, and based on the ranges used by16 it is less than 10% low, 10-30% medium, and more than 30% high.

(4)
The expected genetic improvement when 5% of the plants were selected was estimated19. The ranges suggested by16 for the expected genetic improvement were adopted as a percentage of the average: less than 10% is low, 10-30% is medium, and more than 30% is high.
The Laboratory Study
Although the R.A.P.D. The technique is a relatively old and simple molecular method, but it is still widely used due to its ease of application and economics compared with other high accuracy techniques.
DNA Extraction
Genomic D.N.A. was extracted from plant tissue according to the protocol of Wizard Genomic D.N.A. Purification Kit (Promega, U.S.A.)
Quantitation of D.N.A.
To detect the extracted D.N.A., a fluorescent indicator was used to detect the goodness of samples for downstream applications. For 1 μl of D.N.A., 199 μl of diluted Quanty Flour Dye was mixed. After 5min incubation at room temperature, D.N.A. concentration values were measured.
PCR Amplification
Thermal Cycling Protocol

Table 3. Primers
RAPD Technique
The R.A.P.D. The technique was applied using nine random primers in the sequences shown in table (4) to study the discrepancy between 9 varieties of wheat entering Iraq for the first time (Table 1). 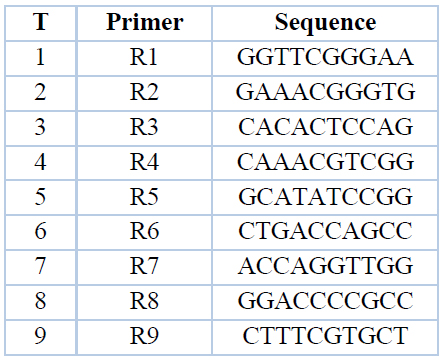 Table 4. Names and sequences of the random primers used in the experiment

Table 5. PCR Program
Agarose Gel Electrophoresis
After PCR amplification, agarose gel electrophoresis was adopted to confirm the presence of amplification at 80 volts for an hour and 40 minutes. The results of the R.A.P.D. Random multiplication was examined by imaging the electrophoresis patterns for each primer and identifying the bands, where the presence of the bands is represented by the number (1) and the absence of the band by the number (0). Cluster analysis was also conducted using the Euclidean program, and the scale through the genetic distance was estimated according to the R.A.P.D. Indicators and based on the similarity scale (Jaccard Index), after calculating the similarity ratios according to the previous laws, the other stage begins to calculate the genetic kinship and the Phylogenic evolution tree was drawn for a class of similar individuals next to each other in one cluster. If the genetic material is identical between two classes, this indicates that the genetic dimension must be equal to zero, and the similarity ratio is equal to 1 (100%)20 .
RESULTS AND DISCUSSION
It is noted from Table (6) that the averages of the cultivars' squares differed significantly at the 1% probability level for all the studied traits except for the trait of the number of days to flowering at 50%, which did not reach the level of significance. Such differences between varieties in the characteristics give the appropriate opportunity for plant breeders to benefit from them in future breeding programs. 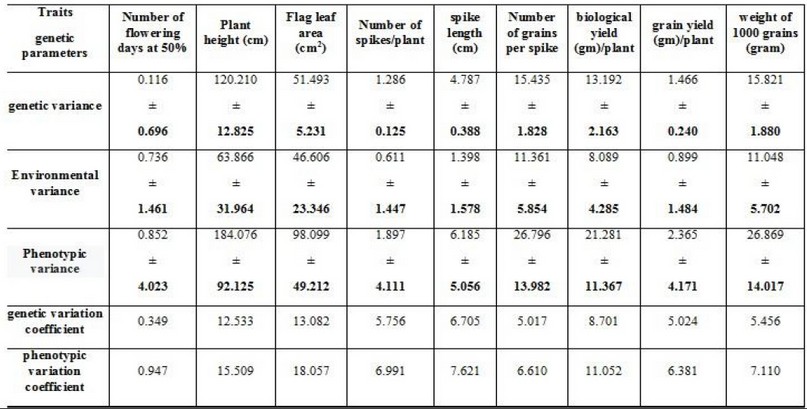 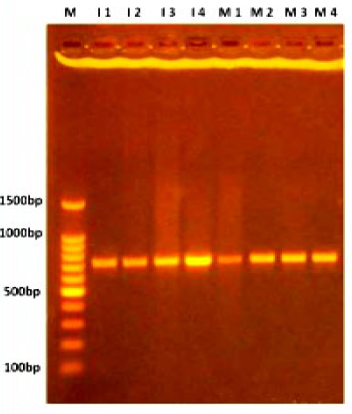 Figure. 1 ITS region amplification fractionated on 1% agar gel electrophoresis stained with Eth.Br. M: 100bp D.N.A. marker.
Polymorphism resulting from the use of R.A.P.D. technique
Eight primers were highly efficient in detecting the divergences between the varieties, according to Table (9).
Depending on the primer used, the results showed a clear difference in the number of alleles, in addition to the presence of primers that did not show any bands, and the reason may be due to the absence of a complementary linkage region for the sequence of bases for this primer on a complementary site within the D.N.A. sequences of the genome of the studied species. Several studies showed the presence of differences in results for primers24,25. The rest of the primers had varying abilities to detect the magnitude of genetic variation among the studied genotypes, while others gave a less number of bands. We also note that the nine primers gave 30 allelic loci, including 9 major alleles for their appearance in all genotypes, while the different alleles are of the characteristic alleles of the genotypes, and 21 alleles are relied upon to determine the genetic link between the genotypes. 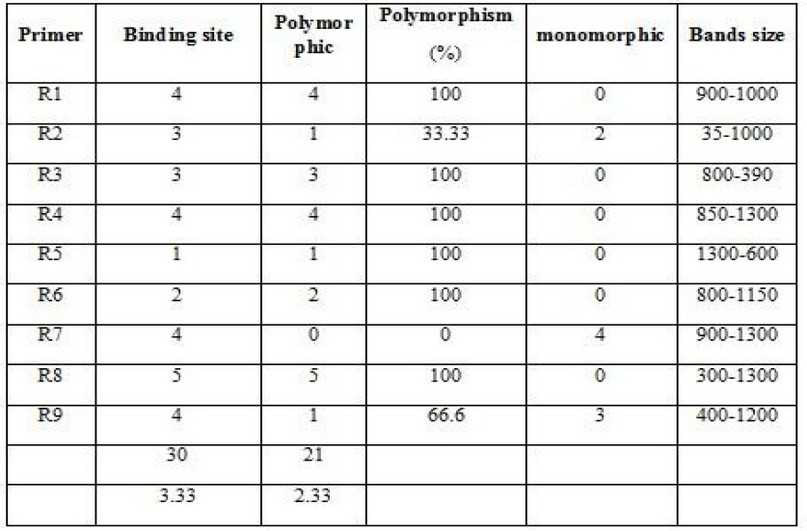 Table 9. Genetic variances for the primers used
Primer R1
This primer was used in genotypic D.N.A. replication, and 4 different allelic binding sites were obtained, and the percentage of them was 100%. This primer showed an apparent variation in bands position and a molecular weight ranging between 1000-1100bp.
From Figureure (1), it is clear that cultivars 6 and 4 do not have any linkage site with this primer, and the reason is due to the absence of a complementary linkage region for the base sequence of this primer on a complementary site within the genome D.N.A. sequences of the studied species. 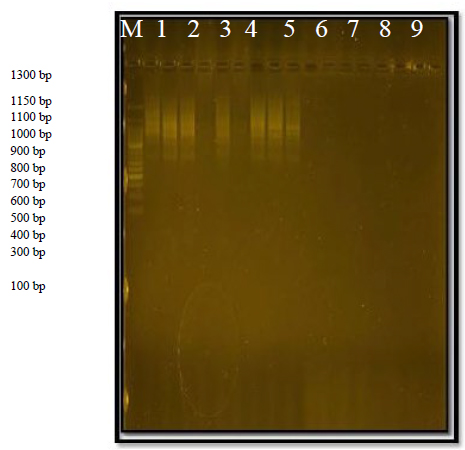 Figure 2. The product of the random amplification reaction of D.N.A. using the R1 primer.
Primer R2
The primer was able to identify 3 sites of its complementary sequences in the D.N.A. of the genome; all of the first structures with a size of 35 bp and the second 1100 bp are present in all varieties. The third link site has complementary sites in the first and second variants, with a size of 1000 Pb. This primer showed a 33.33% variation. 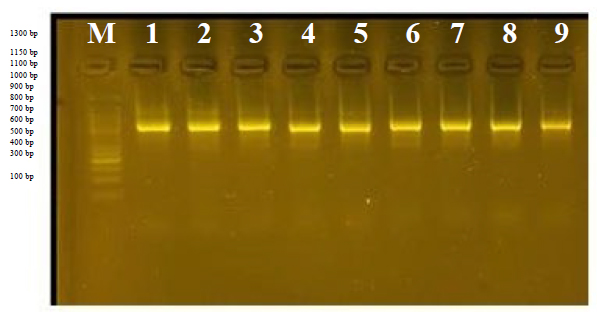 Figure 3. The product of the random amplification reaction of D.N.A. using the R2 primer.
Primer R3
The number was 3, whose sizes ranged from 390bp to 800bp. Cultivar 6 was distinguished by the absence of bands and was considered a distinctive feature of this cultivar, and the variance ratio was 100%.

Figure 5. The product of the D.N.A. random amplification reaction using the primer R5.
R6
This primer showed two complementary genomic loci, the first was associated with a size of 800 bp, and the second site distinguished a locus with a size of 1500 pb. As for variants 2 and 6 respectively, it was distinguished by the absence of any complementary linkage to the primer, and the divergence ratio was 100%.

Figure 6. The product of the D.N.A. random amplification reaction using the primer R6.
R7
This primer was distinguished by the presence of 4 identical bans for all types, the similarity rate was 0%, and their sizes ranged from 900 to 1700bp.

Figure 7. The product of the D.N.A. random amplification reaction using the initiator R7
R8
This primer produced 5 different bands, ranging from 400 to 1700bp, with a variance of 100%.

Figureure 8. The product of the D.N.A. random amplification reaction using the initiator R8
R9
This primer produced 3 bands ranging from 400 to 1200pb. Variant 8 was distinguished by the absence of a band with a size of 400pb in all varieties, and the variance ratio was 66%. This is considered a distinctive feature of variant 8 because the initiator did not find a complementary site for it. 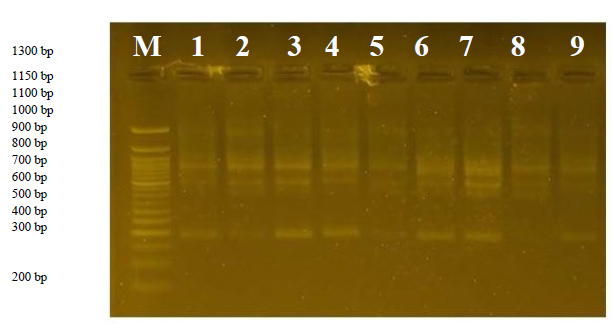 Figureure 9. The product of the D.N.A. random amplification reaction using the initiator R9
The relative relationship between the wheat cultivars under study based on R.A.P.D. data
According to the previous results, the R.A.P.D. The technique was able to find unique and distinct bands capable of distinguishing between the studied wheat varieties; that is, these bundles were found in a particular variety and absent in other varieties. Genetic banks can use it to distinguish the mentioned cultivars. This confirms the importance of this technique in studies of molecular characterization and genetic fingerprinting.
A genetic relation tree was made for the nine taxa, where U.P.G.M.A. similarity values were estimated using the studied R.A.P.D. method based on data analysis.
The similarity between the studied wheat cultivars was Estimated based on the results shown by the primers, where the results that appeared in the gel electrophoresis were transferred to the characterization tables by placing one in the presence of a band and zero in its absence after that the symmetry matrices are formed based on the coefficients  Table (3) results of the similarity matrix between the studied varieties. The highest similarity was between the variety (2 and 8), and its value was 0.9167; most of the traits showed closeness in the arithmetic means between them for all genetic traits, while the lowest similarity value was between the two variants (3 and 6), where the result of reading the arithmetic mean was significantly different in most of the phenotypic traits between these two variants, these results between varieties using R.A.P.D. Indices were associated with phenotypic traits and were consistent with what was found before8, where the results showed that the lowest genetic distance was between two cultivars that have specific significant characteristics in common. 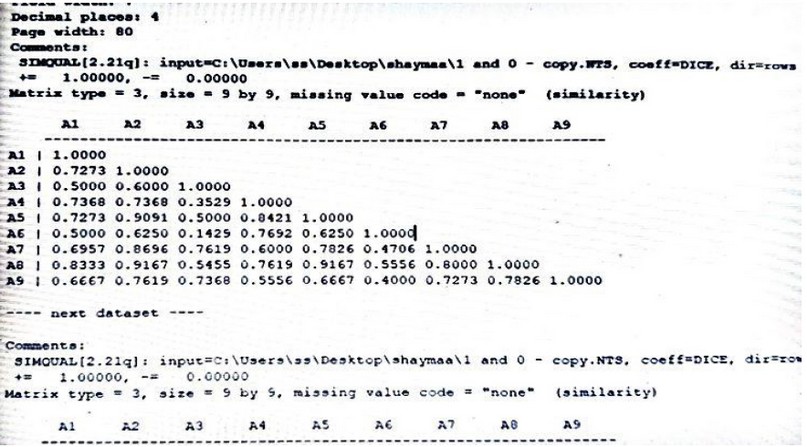 Figure 10. The kinship relationship between the studied wheat cultivars based on R.A.P.D. data.
Cluster analysis of genotypes of bread wheat based on R.A.P.D. Markers
Cluster analysis shows the evolutionary relationship of a group of living organisms that arose from a common lineage containing the largest possible number of genotypes in plant breeding and development programs,. The accessions may be collected in one group according to their geographical location or origin and lineage Figureure (11).
The nine bread wheat varieties cluster tree showed two main groups; the first leading group was divided into two secondary groups, and the first secondary group was divided into two branches. The genetic material of these genotypes may be similar according to the number of D.N.A. segments to the gene of these complementary structures of the primer sequences used, while the second secondary group included variants 4 and 6, and the reason for this relationship is due to sharing most of the genetic traits and their possession of a number of similar D.N.A. pieces to show the extent related to each other, while the second main group included only variants 3 and 9, due to their uniqueness of their behavior with most of the primers used in the study. 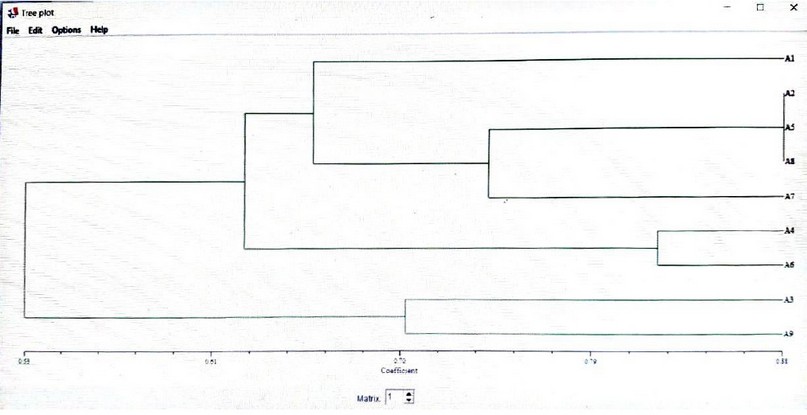