Aline Siteneski 1,2*, Leonardo D. Jalca Cantos 2, Emily P. Calderón Delgado2, Ruth M. Yaguache Celi2, César A. Silva Saltos 2, Angel Zamora2, Mónica Mastarreno 2, Diego Portalanza3.
Available from: http://dx.doi.org/10.21931/RB/2021.06.02.7
ABSTRACT
Traffic accidents are serious public health problems, account for profound economic costs to individuals, families, and societies. The social impacts range from physiological to economic causes, which could be a serious negative effect, especially in undeveloped countries. To further elucidate this problem, the prevalence of injuries caused by traffic accidents in a Santa Ana Health Centre, Portoviejo, Ecuador, was studied. This registry-based retrospective study analyzed data on Santa Ana, from Enero 2016 to Diciembre 2019, and the medical records of patients who had been admitted were extracted and analyzed. Passengers cars, motorcycles, and bicycles involved in collisions were included, and the information collected was relating to sex, age, and type of injuries. In total, 75%±6.34 patients victims of road traffic injuries were males, and their mean age was 20 and 49 years. There was a cooperative agreement between total injury occurrence (%) and type of vehicle. Bus and car accidents had lower relation (R2 = 0.44, 078) (p = 0.063, 0.005) with total occurrence. The highest relation was found in motorbikes (R2 = 0.98 p = 2e-05), since it's the primary or most popular means of transportation in the city. The best of our knowledge is the first study to reporting data on road traffic injuries in the Province of Manabí, the third-largest province in extension in Ecuador. Additional studies with larger populations are thus necessary to construct a robust data system in undeveloped countries that can facilitate the flow of reliable information about road traffic injuries.
Keywords: Road traffic injuries; Traumatic brain injury Polytrauma; Ecuador

INTRODUCTION
Traffic accidents are serious public health problems, account for profound economic costs to individuals, families, and societies 1. The estimated global annual rate of road traffic deaths of about 17.4 per 100000 population 2. in low-and-middle-income countries, despite owning just about 54% of the world's motor vehicles, is predicted to move from the current eighth to the sixth leading cause of death by the year 2030 3. It is suggested that for every one road traffic accident-related death, an additional 20–50 more individuals suffer some disability 4,5. Road traffic injuries are also the leading cause of years of potential life lost, according to the global burden of disease study 6,7. The severity is represented through the dates of 2016 when motor vehicle collision was responsible for 1.35 million fatalities globally, and these numbers are continuously increasing 8.
Data showed that almost 50% of global road traffic deaths occur among vulnerable road users, as motorcyclists represent 23 %, followed by pedestrians 22 %, and cyclists 4 % 9. Additionally, it is worth mentioning that early mortality and disability are attributable to young adults (between 15–44 years). More than 460.000 young people under 30 years die in road traffic crashes each year, about 1262 a day and, more than 75 percent of the deaths occur mostly among low- and middle-income countries 10. Any complications resulting from road traffic injuries contribute to the lengthened hospital occupancy, increasing costs, and mortality. Polytraumatizm is one of these complications, with rates descript up to 60% 11,12. Immobilization, limited immunologic response, emergency interventions, and frequent mechanical ventilation are the causes of this high complication rate; abrupt and primary trauma deaths are determined by significant brain injuries or significant blood loss (hemorrhagic shock). In contrast, late mortality is caused by minor brain damages and host defense failure (3–15). Both poly traumatism and traumatic brain injuries are increasing as motor vehicles are more widely used in developing countries 16,17.
In low-and middle-income countries, the scarcity of adequate medical care, rehabilitation services, and protection mechanisms aggravate problems. Road traffic injuries can include pedestrian, bicycle, or motor vehicle as a motorcycle, bus, or car whose collision involves at least one moving vehicle that occurred or originated on a road or street open to public traffic and resulted in one or more people being killed or injured 18,19. The resultant misfortune deaths or disabilities can take a heavy toll on families and friends, who frequently are obliged to dispense from work to dedicate themselves to the patient's care 5. Similarly, all patients and families suffer adverse financial debts because of the costly rehabilitation services and reduced income, physical discomfort, social and emotional strains 20,21. It is worth stating that due to the high costs associated with road traffic injuries related to patients' incapacity, governments have been adopting public politics to reduce these events. Equally, the road safety management, safer roads and mobility, safer vehicles, safer road users, and postcrash care 22,23.
According to the World Health Organization (WHO), there is a need for more research on epidemiologic accident patterns in low and middle or low-income countries to determine the problem's dimensions and identify vulnerable individuals. The health sector needs to expand its traditional caregiving role and be involved in areas relevant to promoting road safety, such as data collection, support, policy development, and capacity development 2,9,10. Determining the type of injury, the vehicle involved, and the risk group through the system by collecting information may be valuable key elements not identifying and assessing preventive actions. Those measures have critical clinical implications concerning these patients' care prevent traffic fatalities in middle or low-income countries 1,24,25. In Ecuador, according to the National Traffic Agency (NTA), the annual record of misfortunes has been decreased in the last four years, but for Manabí Province, this number was increased 26,27. In this sense, the present work's objective investigated road traffic injuries in the Santa Ana health Centre in Ecuador.
METHODS
Patients and variable description
The observational study was a retrospective analysis of the data from a health center-based database of Santa Ana in Ecuador, belonging to Portoviejo city, Manabí (Figure 1). The data from Santa Ana were recorded from 2016 until 2019 by the Technical University of Manabí (UTM) medicine students, all traffic accident injuries were registered. The inclusion criteria for the study were no fatal patients. Collected information on the variables were type and injury mechanisms: polytrauma, brain injuries, gender, age, and type of vehicle involved (motorcycle, bicycle, car, or bus) during 4 years (2016-2019). 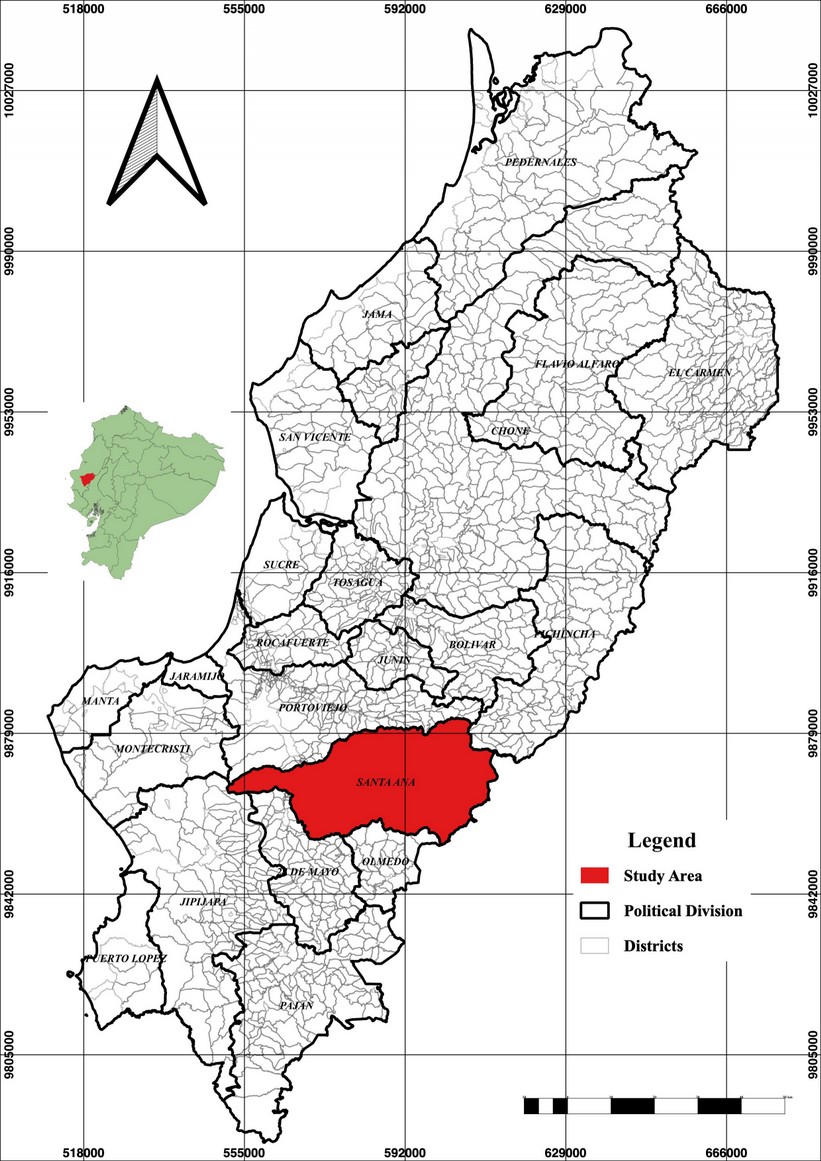 Figure 1. The figure represents the study area in Santa Ana, Manabí Province, in Portoviejo, Ecuador.
Variable analysis
To understand the relation between the obtained data, an exploratory data analysis (EDA) was performed. First, we plotted boxplots for all types of vehicles (TOV) (bike, bus, car, and motorbike) and injuries (TOI) brain injury (TB), polytrauma (POL), upper limb fracture (ULF), lower limb fracture (LLF), spinal, chest and abdomen injury (SCA), facial injuries (FI), superficial injuries (SI) and dislocations (DIS) for4 years (2016-19). Second, we divided TOV and TOI into years to understand year-to-year variations. A boxplot is a standardized way of displaying the data set based on a five-number summary: the minimum, the maximum, the sample median, and the first and third quartiles 28,29. We use the interquartile range (IQR) to compare variables using the following equation (Eq 1)

were IQR is the interquartile range, Q3 is the third quartile, Q1 is the first quartile, qn (0.75) is the upper quartile, and qn (0.25) is the lower quartile. Third, to show the spread of positive and negative values from TOI, a diverging chart was performed based on the total number of years. Preparation of the data as follows:
a)      Compute normalized values, to create central, positive and negative divergence (Eq. 2):

were Nv being the normalized values, Q are single value observation, Qmean is the value mean, Sd is the standard deviation, and Qi are the total observations 30. Fourth, density histograms were plotted to represent the visualization of the variations within TOV and TOI. For this, using equispaced breaks (x=observed values) and estimated density values (y= relative frequencies) as follows (Eq. 3)

The number of breaks and f(xi) 31 is the estimated density value 32. Finally, to represent gender and age groups differences, we used a population pyramid 33 in which ages were divided into groups (1 – 4 years, 5- 9 years, 10 – 14 years, 15 – 19 years, 20 – 49 years, 50 – 64 year and > 65) using ranges from the Ecuadorian Nacional Survey Institute (INEC) 34. Finally, the total relative frequency was correlated with the type of vehicle using linear regression; for this, we calculate the coefficient of determination (R2), slope, and intercept.

R2 is the coefficient of determination, x is the frequency value for total injuries per type of vehicle, and y is the vehicle's total frequency. All plots and calculations were performed using RStudio version 1.2.5033 35,36 using stats package. Density histograms and boxplots were plotted using the ggplot2 package for R 37.
Compliance with ethical standards
Personal identifiers had already been removed from the study. Because of this study's anonymous and retrospective nature, the need for informed consent was waived by the Ethics Committee that approved the study Protocol.
RESULTS
Type of injuries comparisons between the four years
The highest traffic accident injury incidence during the studied period (2016-2019) is shown in figure 2a and 2b. In the first year, 45% of the patients suffered a traumatic brain injury (considered mild, moderate, and severe), poly traumatism (estimated as mild, moderate, and severe), which represented 35%, and 10% cases of lower extremity fracture (equivalent to the tibia, fibula, malleoli, patella, pelvis, anterior cruciate ligament, and metatarsus), open upper extremity wound (associated with the radius and ulna), open upper extremity wound (radius and ulna), lower extremity (considering tibia and metatarsus) corresponding to 5% in each of the cases respectively. In the second year of study, poly traumatism corresponding to 32.26%, traumatic brain injury corresponding to 25.81%, fracture of the lower extremity equivalent to 21.51%, 5.38% upper extremity (associated with carpus, radius, ulna, humerus and clavicle), FI corresponding to 4.30% (related to fracture of the upper jaw, eye injury, eyebrow injury, fracture of the bones of the face and nose) and fracture of the spine, chest, and abdomen representing 4.30%, open lower extremity wound equivalent to 3.23%, superficial injury (corresponding to multiple lacerations) with 2.15% and dislocation (upper and lower limb) with 1.08%. In the third year of the study, we found a high multiple trauma percentage (48.75%) and traumatic brain injury (21.25%), followed by LLF (12.50%), upper limb (8.75%), open lower limb, and FI (3.75% each group) and dislocation (1.25%). Finally, in 2019, we found traumatic brain injury and polytrauma (18, 25% respectively) as the leading cause of injury, followed by superficial injury (22%) LLF (14%) ULF (8 %), spine injury, chest and abdomen (6%), face injury (3%), and dislocation (5%). 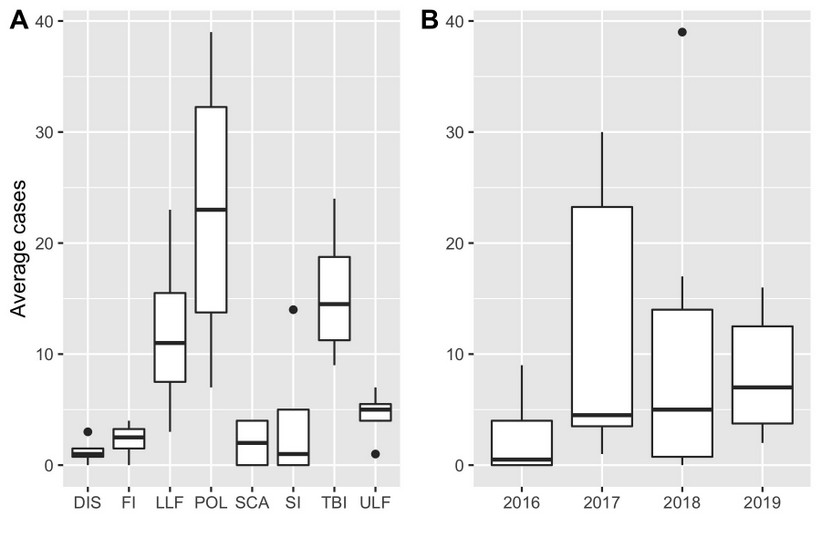 Figure 2. Prevalence of cases per type of vehicle and average of occurrence over time. The number of cases per type of injury (TOI) (a) and yearly average of occurrence (b) boxplot. Boxes represent values between the 25th and 75th percentile. Lines represent the median, and the dots represent the outliers.
Type of vehicle comparisons between the years of the studied period
Four motor vehicle types were recorded (motorcycle, bicycle, car, and bus) associated with road traffic accidents. (Figures 3a and 3b). In 2016, it was observed that the frequencies of victims were high in motorcyclists (represented 75% of the cases), followed by car users (25%). Later, in 2017, road traffic accidents represented by motorcycles, cars, and buses were 78.49%, 17.20%, and 4.30%, respectively. Statistics for 2018 shown that 85% of accidents were motorcycles, 13.75% automobiles, and 1.25% bicycles. Decisively, in 2019 was observed 83% of motorcyclists, followed by 11% cars, buses (5%), and cyclists (2%). 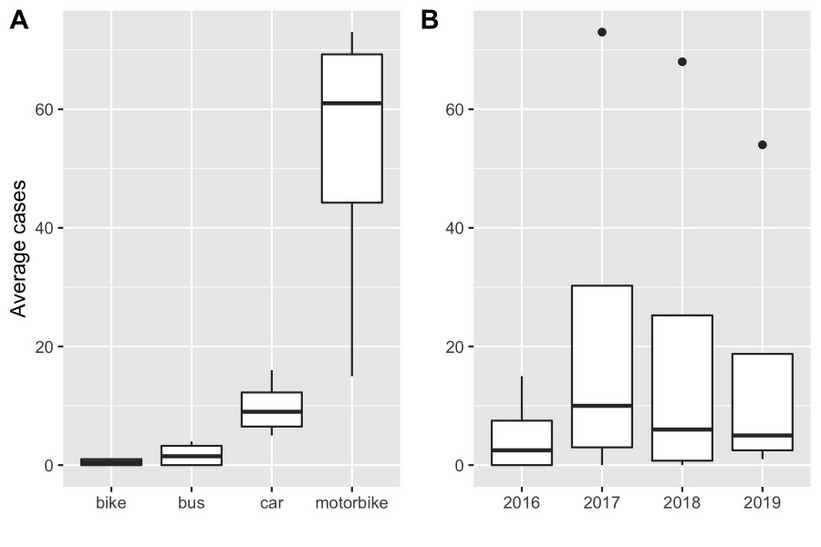 Figure 3. Prevalence of cases per type of vehicle and average of occurrence over time. The number of cases per type of vehicle (TOV) (a) and yearly average of occurrence (b) boxplot. Boxes represent values between the 25th and 75th. Lines represent the median and the dots represent the outliers.
Age and sex comparisons.
From 2016 to 2019, the prevalence of road traffic injuries was recorded mainly in men and was gradually increased over the years, reaching its highest record in 2017 (75% in the first year, 81.72%, 80 and 75.38% respectively, of the total data of 258 investigated patients). The predominant age of the victims was between 20 and 49 years.
Type of vehicle and trauma relation
The Odds Ratio (OD) represent the type of injury and type of vehicle were descript in table 1 OR were > 1 showing a positive association between motorcycles or cars and all kinds of injuries. Total cases per type of trauma were represented in Figure 4. There was a cooperative agreement between total injury occurrence (%) and vehicle type (Figure 5). Bus and car accidents had lower relation (R2 = 0.44, 078) (p = 0.063, 0.005) with total occurrence. The highest relation was found in motorbikes (R2 = 0.98 p = 2e-05), since it's the primary or most popular means of transportation in the city. 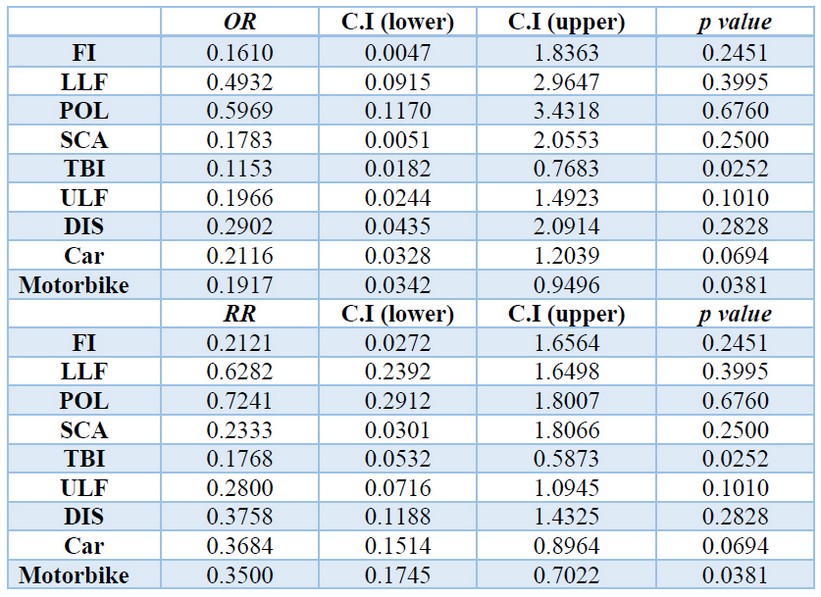 Table 1. Odds and risk ratios for the type of injury and type of vehicle. 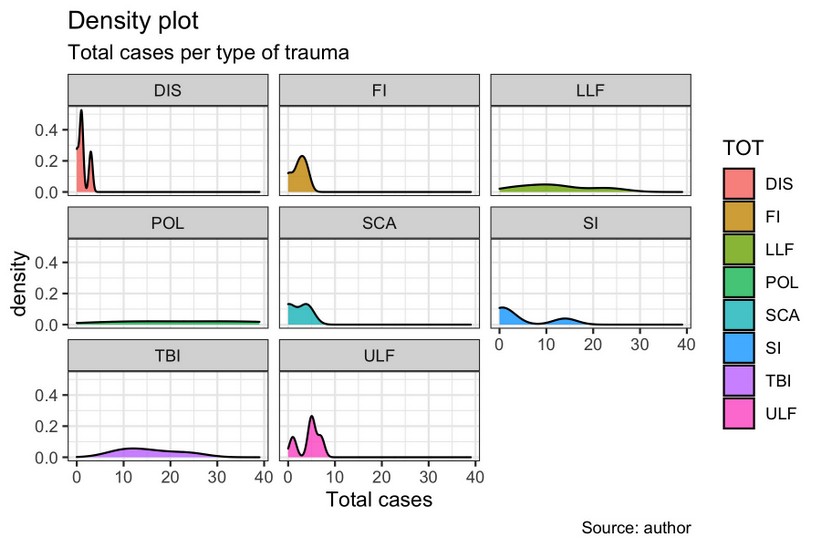 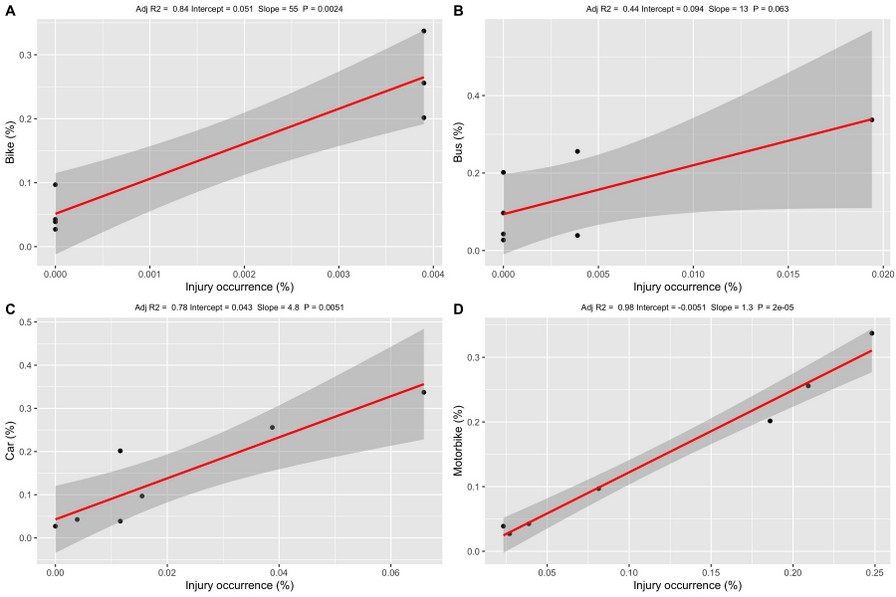