Thet Htwe Aung
Available from: http://dx.doi.org/10.21931/RB/2019.04.01.6
ABSTRACT
The marine green algae were collected from Apor Seik, Pashyu Chaung, Chaytoryar Pagoda, Alè Seik, Auk Sei,  and Kyunn Pyet or Cavendish Island along the Kalegauk Island from September 2016 to January 2017. In the study areas, salinity range and temperature regimes seawater were 26-27 ‰ and 29° C to 31° C, respectively.  Mainly the present study had been made to know the diversity and distribution of marine green algae along the Kalegauk Island. Marine green algae were identified based on their internal and external morphological characters. The total 14 species could be recorded in Kalegauk Island. Of these species, almost all species were first new records for Kalegauk Island.Alson, it was concluded that all species would be the most diverse and abundant in Apor seik. Moreover, the present study could provide evaluating the impacts of marine green algae resources caused by infrastructures in the future.
Keywords: Morphological characters, Kalegauk, New record,  and green algae.
INTRODUCTION
Marine benthic green algae are usually found in the intertidal zone and in shallow waters where there are plenty of nutrients and sunlight. Green algae usually appear in green because they contain the same ratio of chlorophyll a and b as that of higher plants. Hence, it is generally believed that green algae are closely related to terrestrial higher plants in the theory of biological evolution1
Kalegauk Island is the island in Ye township, Mon state, Myanmar. It is located in the northern part of the Andaman Sea, 8.25 km from the coast of Mon. The island has a long shape with a length of over 10 km and a width of 1.6 km in itsmost extensivet are,  and there is a small Cavendish island lies 0.5 km off thesouthernn point of Kalegauk Island. It is mainly composed of four villages, viz., Apor Seik Village, Auk Seik Village, Alè Seik Village and Pashyu Chaung VillageAlsoon, Chaytoryar Pagoda is also one of the most famous places in Kalegauk IslandMangrove forests rather than rocky shores generally cover the coastal areas of the Kalegauk Islandes. The coastlines of Kalegauk Island dominantly comprise ocovereder by mud, silt and clay and many capes or promontories on these areas. In the study areas, salinity range and temperature regimes seawater were 26-27 ‰ and 29° C to 31° C, respectivelyNowadaysay Kalegauk Island has been declared as the island to be constructed deep sea port.
Therefore, thprimaryin objective of the present study is to record the diversity and distribution of marine benthic green algae from Kalegauk Island with their morphological characters. As a result, this study will become primaryic informational providing data for further observing on the marine green algae of Kalegauk Island.
MATERIALS AND METHODS
Marine green algae were collected in the forms of drift and live specimens growing in the high tide line, intertidal and shallow subtidal areas from Apor Seik, Pashyu Chaung, Chaytoryar Pagoda, Alè Seik, Auk Seik and Kyunn Pyet from September 2016 to January 2017. The site location, topography, associated flora and fauna and other related parameters of Kalegauk Island were recorded. In the field, all the adhering materials such as sand particles and other debris as well as epiphytes were removed from the samples with the help of painting brush before preservation. The seaweed samples preserved 4% formaldehyde with seawater. All the bags and containers were labeled withe th date, time of collection, locality and transport to the laboratory of Marine Science Department for further analysis.
In the laboratory, color and morphological differences between different genus, species and taxonomic characters firstly studied and then the collected seaweeds had been identified wian th emphasis on the external and internal morphologies of vegetative and reproductive features. For internal details studies of the thallcross-sectionion (c.s) were obtained freehandand with shaving blades, then stained in Aniline Blue (0.5 g water soluble aniline blue in 100 ml distilled water and 5 ml conc. Acetic acid) and mounted in glycerine. Vegetative and reproductive structures of the plants were studied under the Olympus compound microscope and Kaneko Yushima dissecting microscope. Microscopic measurements were recorded in micrometer (µm) using the ocular meter. This stuly followed the classification system of Guiry and Guiry2. 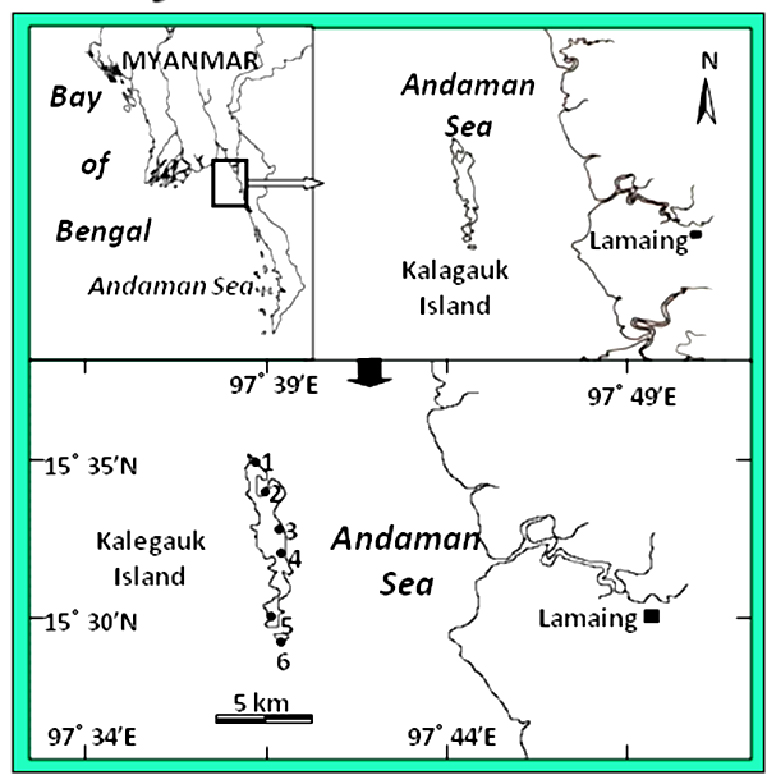 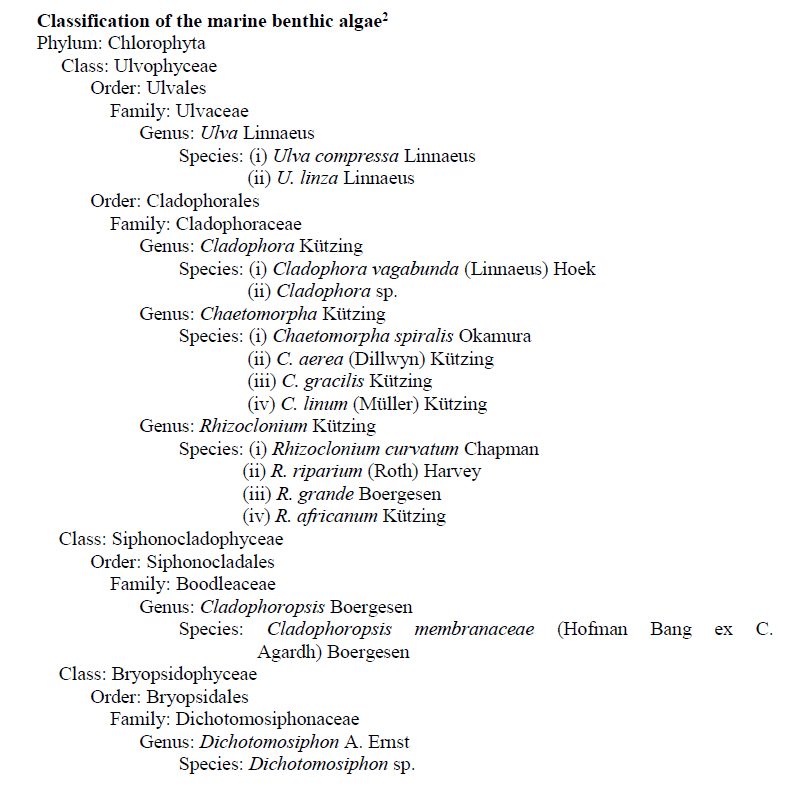 Dichotomosiphon sp. (figs. 49-52)
Description. - Plants small, composed of siphonous tubes with constriction at points of ditrichotomous branching, pale green in color and not segmented. Branches network in shape, rounded at the tip, 80-40 μm long and 12-20 μm wide.
Distribution. - Apor Seik and Chaytoryar Pagoda.
DISCUSSION
Tin Aung Myint.27 was firstly observed the eeds around the Kalegauk Island in 1971. After that, some marine algae of Kalegauk Island had been described as a small part of their algal flora study in Myanmar by Kyaw Soe and Kyi Win in 197719. Since 1977, there was no record and study about the marine algae in Kalegauk Island. Compared with the present study in which the total 12 species of green algal flora could be recorded, almost all species were new records for the seaweed resources of Kalegauk Island with the exception of Rhizoclonium riparium and Dichotomosiphon sp. which had been described in the previous studies. Therefore, it could be possible that the present study was the first specific record for the marine green algal flora of Kalegauk Island.
Compared with the previous studies of green algal flora in Myanmar, Rhizoclonia um curvatum was new record for Myanmar in the present study according to the references available. However, Cladophora sp. and Dichotomosiphon sp. could not be identified up to the species level due to lack of specimens and references.
Chaetomorpha spiralis, C. aerea and Dichotomosiphon sp. had not been recorded in distribution and potential utilization of marine algae of Myanmar by Soe Htun et al. 200912. However, these species were reported in seaweed for utilization by Kyaw soe and Kyi Win 197719. It is well-known that Kalegauk Island can be one of the islands without depleting its algae resources compared to the other areas of Myanmar.
As regards the distinguishing morphological characters, the filaments of Rhizoclonium curvatum were laterally attached with segmented branchlets or celled rhizoids at their curves whereas those of other Rhizoclonium only had rhizoidal branchlets. Likewise, Chapman 194922 also described this species seems fosharpight to distinct curves sepacalledby fairly celled rhizoids, forming position Y at the junction. The present ady was found the similar result. Moreover, it was strange that Dichotomosiphon sp was only one the species which is composed of siphonous tubes with constriction at points of ditrichotomous branching.
During the field study, Ulva compressa, U. linza and Cladophoropsis membranaceae were ubiquitous and were found everywhere in Kalegauk Island. Cladophora vagabunda and Cladophora sp. were commonly found in the mangrove forests of Apor Seik and Alè Seik. Chaetomorpha gracilis, C. linum and C. spiralis were too numerous in the rocky shore as well as mangrove forests of Apor Seik, Auk Seik, Alè Seik and Pashyu Chaung. Chaetomorpha aerea were found in Apor Seik and Pashyu Chaung. Rhizoclonium riparium, R. grande, R. africanum and R. curvatum were also scattered in the rocky shore and mangrove forest of Apor Seik, Alè Seik and Pashyu Chaung. Dichotomosiphon sp grows on silt and mud of Apor Seik and Chaytoryar Pagoda and then it was too smaquicklycoAlsoeasily. In addition, the green algal flora species were found 14 numbers of species in Apor Seik, 11 numbers of species in Pashyu Chaung, 4 numbers of species in Chaytoryar Pagoda, 12 numbers of species in Chaytoryar Pagoda, 6 numbers of species in Auk Seik and 3 numbers of species in Kyunn Pyet. 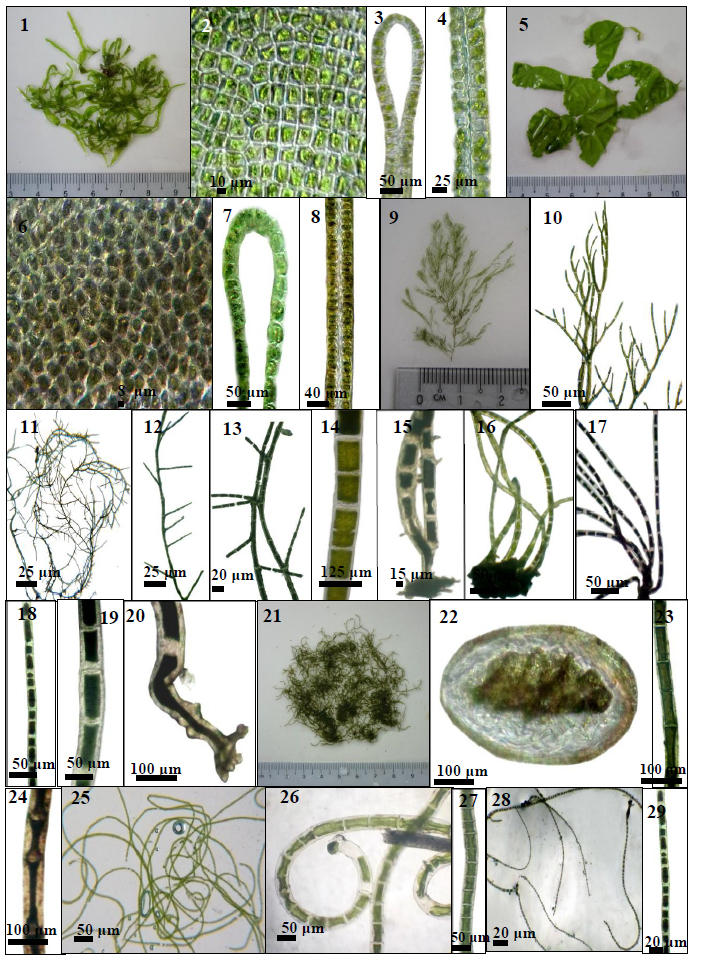 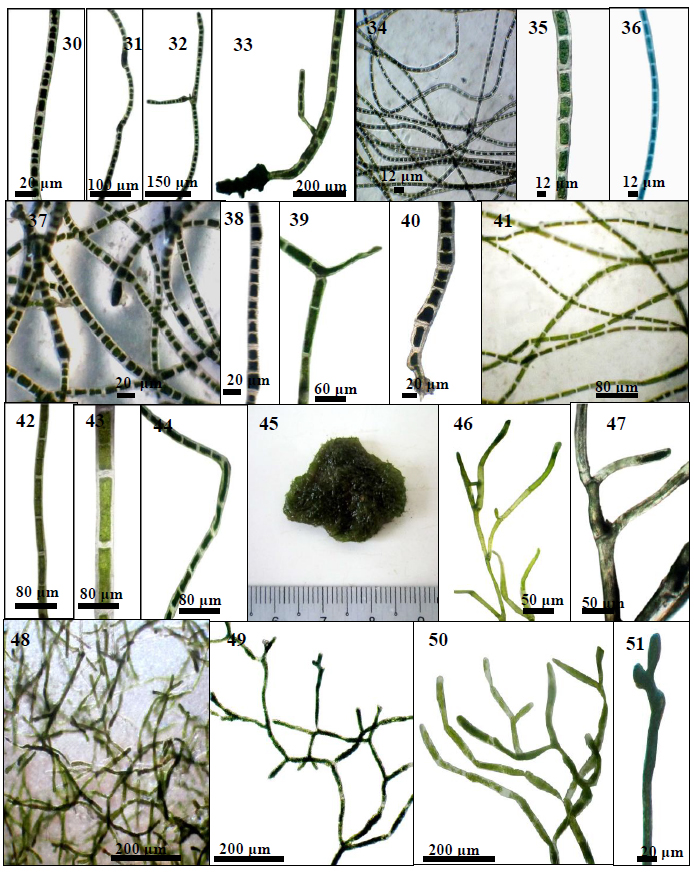 Figs. 3. 1.  Cells of R. curvatum; 32) Arcuate filaments of R. curvatum; 33) Apical branchlet of R. curvatum; 34) Lower branchlet of R. curvatum; 35) Habit of Rhizoclonium riparium; 36-37) Cells of R. riparium; 38) Habit of Rhizoclonium grande; 39) Cells of R. grande; and 40) Rhizoidal branchlet of R. grande; 41) Holdfast of Rhizoclonium grande; 42) Habit of R. africanum; 43-44) Cells of R. africanum; 45) Arcuate filament of R. africanum; 46) Habit of Cladophoropsis membranaceae; 47) Branch system of C. membranaceae; 48) Segment of C. membranaceae; 49) Habit of Dichotomosiphon sp; 50-51) Branch system of Dichotomosiphon sp; and 52) Oognium of Dichotomosiphon sp.
CONCLUSION
In relation with the present study, it can be considered that marine green algae seem to be the most diverse and abundant species in Apor Seik and there would be other unrecorded seaweed in Kalegauk Island because Kalegauk Island iAfterwardpulation. Aferwards, Kalegauk Island is necessary for the study of other marine algae and the observations of the seasonal ecologyAcknowledgments.
ACKNOWLEDGEMENTS
I would like to express my gratitude to U Kyin Aung and Daw Myint Myint San, my dearest parents for financial supports to carry out this study.
REFERENCES