Previous / Index / Next
Polyene macrolide antibiotic nanoemulsion: a proposal for the treatment of cutaneous leishmaniasis

Figure 1. The skin used in permeation and retention studies. (A) It has intact human skin. (B) Lacerated human skin. Source: own elaboration.
In vitro cytotoxicity test
Three cell lines were used to establish the cytotoxic effect of NE-AmB: two macrophage cell lines, RAW 264.7 and J774A.1, and one keratinocyte cell line (HaCat) (Eppelheim, Germany). A suspension of 5.0 x 104 cells/mL of each cell line was seeded in 96-well plates (Costar 3596, Corning Incorporated, NY, USA) and incubated at 37 °C, 5% CO2 atmosphere and in RPMI-1640 complete medium supplemented with 20% fetal bovine serum, thermoinactivated, and 1% penicillin (100 U/mL)-streptomycin (100 mg/mL) solution for 24 h. After that, serial double dilutions of the NE-AmB, NE without AmB, and AmB solution were added, and incubation conditions were maintained for another 24 h. Finally, 10% WST-1 reagent (Roche Diagnostics GmbH) was added to all Wells, and these were incubated for four h under the same conditions of temperature and CO2 atmosphere. Cultures were included as positive control and negative control. Absorbance was read at 450 nm (Multiskan EX, ThermoElectron Corporation, Shanghai, China). Different concentrations of AmB were assayed, from 150 µg/mL to 0.14 µg/mL. The following equation was used to determine the % cell viability:

In vitro leishmanicidal activity in promastigotes
Promastigote cultures were performed as explained in section 2.2. To evaluate the antimicrobial activity of NE-AmB, serial double dilutions of NE-AmB, drug-free NE and AmB solution were made using Schneider culture medium and plated in a 96-well plate (Costar 3596, Corning Incorporated, NY, USA). To the dilutions, a suspension of 1 x 106 promastigotes/mL (in log phase) was added and incubated at 26 °C for 48 h. Briefly, the samples were lysed, and alkalinization carried out the enzymatic reaction with p-nitrophenyl phosphate. The optical density was read at 405 nm (Multiskan EX, ThermoElectron Corporation, Shanghai, China). Cultures were included as positive control and negative control. The IC50 (the concentration inhibiting 50% of parasite growth) was calculated by variable transformation analysis and linear regression using Excel version 2019, and experiments were performed in triplicate. Different concentrations of AmB in the range of [150-0.14] µg/mL were tested.
In vitro leishmanicidal activity on amastigotes
RAW 264.7 cell line was used to study the activity of NE-AmB, drug-free NE, and AmB solution against amastigotes. A concentration of 5 × 104 cells/mL was seeded on a LabTek 8-well chamber slide system (Nunc, Rochester, NY, USA) and incubated for 24 h at 37 °C in a 5% CO2 atmosphere. Leishmania tropica promastigotes were added to the cells in a 1:10 ratio (macrophages: parasites) and incubated for 24 h under the same conditions. After removal (washing with sterile 0.1 M PBS) of free promastigotes, fresh RPMI-1640 was added as culture médium. Then NE-AmB, drug-free NE, and AmB solution were added, making double dilutions. Plates were incubated for 48 h at 37 °C in a 5% CO2 atmosphere. Cultures were included as the positive and negative control. Slides were fixed and stained with Giemsa stain and counted to assess the number of amastigotes in 300 macrophages to determine the percentage of infected cells (in triplicate). The IC50 was expressed as the percentage of growth inhibition concerning untreated controls.
Draize test
Adult male New Zealand albino rabbits weighing 1.9 and 2.1 kg (San Bernardo farm, Spain) were used. The dorsal area of the trunk was shaved with an electric shaver 24 h before the start of the test, checking that the chosen animals had completely healthy skin. Four 2-cm-long scarifications were made with a lancet, 2 cm apart. The backs of the rabbits were divided into four zones with the help of adhesive tape. In rabbits number 1, 2, and 3, 0.5 mL of NE without active substance was applied on the upper left side, 0.5 mL of the NE-AmB was applied on the lower left side, and no formulation was applied on the upper right and lower right sides, taking them as a control. After 48 h of applying the different formulations, the substances under study were removed to score from 0 to 4 (from lowest to highest) in each area, both the formation of edema and irritation on the exposed skin. Scoring was repeated at 72 h. The mean value of the individual primary dermal irritation index was determined for each rabbit by summing the edema and erythema scores at 48 h and 72 h and dividing the result by 4. The PDI is the average value of the individual indices for each rabbit. According to the obtained PDI value, the products are classified as "non-irritant" (PDI<0.5), "mildly irritant" (0.5 <PDI<2), "moderately irritant" (2 <PDI<5), and "severely irritant" (PDI > 5). Three animals were used for each formulation. Ethical approval for the handling of experimental animals was obtained from the Institutional Animal Ethics Committee (AICE) of the University of Barcelona.
Histological analysis of rabbit skin
Rabbits were anesthetized and sacrificed with sodium pentobarbital. For histological analysis, skin samples from the back of the rabbits were cut and placed for 24 h on plastic disks immersed in 4% buffered formaldehyde at room temperature. After fixation, all samples were embedded in kerosene blocks cut into 5 µm sections and mounted on microscope slides. Subsequently, the samples were stained with hematoxylin and eosin and finally viewed under a light microscope (Olympus BX41 and Olympus XC50 camera) at 100X magnification to evaluate tissue structure.
RESULTS
Preparation of NE-AmB
The physicochemical characterization of NE-AmB has been published, presenting a low viscosity (12.20 ± 0.02 mPa.S) and a Newtonian flow (r=1). It remained chemically stable for at least three months, and the pH remained between 5 and 6. Accelerated stability studies using Turbiscan®Lab showed that this formulation would remain stable (physically) for at least six months. The 55:05:40 composition was finally chosen, i.e., 55% Labrasol®/Plurol Oleic® (5:1), 5% castor oil, and 40% Transcutol®P. NE-AmB presented a droplet size of 112.90 ± 10.15 and a polydispersity index of 0.22 ± 0.02 (Figure 2).9

Figure 2. (A) Ternary phase diagram where the dots are the tested mixtures and the nanoemulsion zones in yellow. The red dot indicates the composition selected for the preparation of the NE-AmB. (B) The image taken by Transmission Electron Microscopy (TEM) can also be seen. (C) The rheological behavior of the NE-AmB.
Ex vivo permeation studies
The amount of AmB retained in both healthy and damaged skin is shown in Table 1. No AmB was found in the receptor medium of the Franz cell, demonstrating that the drug could not permeate through either healthy or damaged skin. Furthermore, 567.97 µg/g/cm2 was found to be retained in damaged skin and 750.18 µg/g/cm2 in intact skin.

Table 1. AmB Amount permeated and retained in human skin.
Cytotoxicity assay
Regarding the HaCaT cell line, these are human keratinocytes, so it is essential to determine toxicity in these cells since NE-AmB would be placed directly on the skin. No cytotoxic effect of this formulation or its excipient was observed. We only observed toxicity with the AmB solution at concentrations of 150 µg/mL (Figure 3A).

Figure 3. HaCaT keratinocytes cell toxicity. (A) AmB solution (µg/mL) (B) NE-AmB (µg/mL) (C) NE without the drug (%v/v).
On the other hand, the cellular toxicity of AmB, NE-AmB, and NE solutions without drug was studied in two macrophage lines, considering that AmB could be absorbed into the bloodstream when the LC is ulcerated. In these cases, it is essential to determine the concentration at which the drug to be tested would be toxic, although, in the permeation studies on damaged skin, we did not find AmB in the receptor medium. The AmB solution showed imminent toxicity at 150 and 75 µg/mL concentrations in the RAW 264.7 and J771A.1 cell lines, respectively. In contrast, at concentrations of 37.5 µg/mL, cell viability above 80% was shown (Figure 4B). NE alone shows toxicity only in the J774A. One cell line (Figure 4B) and NE-AmB showed similar behavior as the excipient (Figure 4C). NE-AmB and NE observe no cell toxicity without the drug in the RAW 264.7 cell line (Figure 4B and 4C). 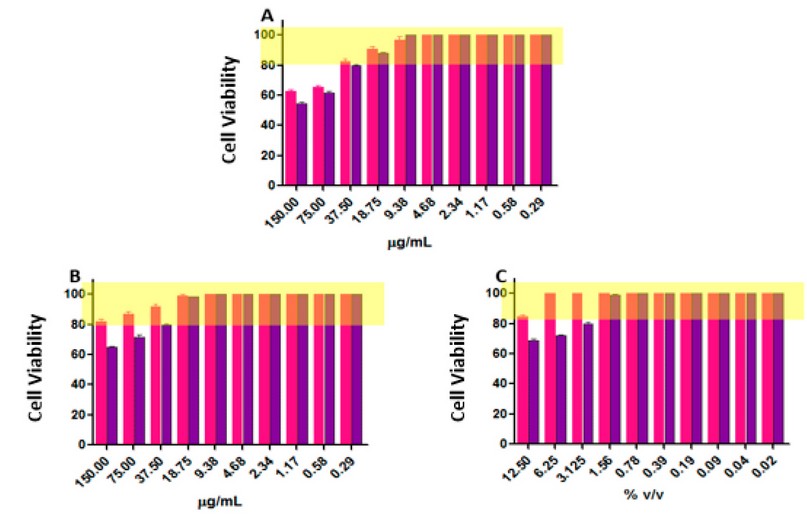 Figure 5. Effect of NE-AmB on infection of RAW 264.7 macrophages with Leishmania tropica. (A) Infected and untreated control cultures (B) NE-AmB-treated cultures. Arrows indicate the amastigotes.
Draize test
48 h after the application of NE-AmB and NE without the drug on the back of the rabbits, no discomfort was observed on the part of the animal throughout the test. No apparent changes (to the naked eye) were detected in the skin of the rabbits, and no edema, erythema, or irritation phenomena were observed (Figure 6).

Figure 6. Draize test with emulsified systems at t0, 24 h, and 48 h. (A) NE = nanoemulsion without AmB. (B) NE AmB = nanoemulsion with AmB. (C) Cº = control (scarification skin without drug).
Histological analysis of rabbit skin
Regarding histological evaluation, micrographs revealed that provoked scarification or control without AmB (scarifications only) showed histological alterations and the presence of nonspecific inflammatory cells in the skin (Figure 7B). Topical application of NE without AmB (Figure 7C) caused some improvement, but inflammatory cells were still observed. However, NE-AmB (Figure 7D) markedly repaired this alteration, resulting in a less pronounced inflammatory process than the control. Figure 7A shows skin without scarification.