Mayra Vélez1,2 *, Glenda Dias3, Irina Morales4, Raul N. C. Guedes2, José Lino-Neto3
Available from: http://dx.doi.org/10.21931/RB/20120.05.02.7
ABSTRACT
Collaria oleosa (Distant, 1883) is a phytophagous bug often observed causing injuries in wheat, barley, and oat crops, besides grass pastures. The male reproductive system of C. oleosa has been studied anatomically and histologically. It consists of a pair of testes, each one with two follicles, one pair of seminal vesicles, two pairs of external accessory glands, and an ejaculatory bulb. The testicular follicles exhibit cysts with spermatogonia, spermatocytes, spermatids, and spermatozoa bundles. The testes are connected to the seminal vesicles by the vas deferens. The seminal vesicles are connected to the ejaculatory bulb and are bound by the accessory glands. In mirids belonging to the Stenodemini tribe, the general morphology of the male reproductive system is similar. However, two follicles per testis may be characteristic of the genus Collaria. The anatomy and histology of the male reproductive system in C. oleosa provides new information and also contributes to the understanding of the systematics of Stenodemini as well as the Miridae family in general.
Keywords: Collaria oleosa, internal morphology, grass-feeding, plant bugs, Stenodemini
INTRODUCTION
Miridae is the largest family of Heteroptera (Hemiptera) with 11,139 species described, distributed in eight subfamilies: Bryocorinae, Cylapinae, Deraeocorinae, Isometopinae, Mirinae, Orthotylinae, Phylinae, Psallopinae, and 39 tribes6,27. The mirids exhibit a cosmopolitan distribution, occurring in all biogeographic regions of the planet6,30. The genus Collaria (Provancher, 1872), belongs to the Stenodemini (Mirinae) tribe with 15 recognized species17. Among these species, Collaria oleosa (Distant, 1883) (Fig. 1) has a significant impact, because it is considered as a potential pest in wheat, barley, oats crops, grass pastures and other plants belonging to Poaceae family8,16.
The plant bug C. oleosa presents economic importance due to the damages that produce when sucks the sap of plants.  The youngest leaves attacked by C. oleosa can partially or dry out, delaying the growth, reducing yield and nutritional value of the crops and grasses palatability1,5,16. Even though the world distribution, host plants, and injuries of this pest is well known, the morphology and histology of the reproductive system have not been studied before.
Studies of Morales et al.17 suggest the importance of the reproductive system to identify the species of Collaria genus. The external male genitalia of C. oleosa exhibits an outstretched pygophore with a discreet spherical apex, U-shaped left paramere, an almost aligned dorsal margin of the basal sensory lobe, a convex ventral margin, and an aligned right paramere. The endosome has two sclerites, with an expanded lobe that further reaches the secondary gonophores, surrounded with micro-hair fixed on the integument and a distal sclerite, C-shaped with spines. Although this study provides data of the genitalia of C. oleosa, detailed information on the male reproductive system of C. oleosa is still needed.
Therefore, the purpose of this study is to describe the morphological and histological structures of the male reproductive system of C. oleosa, besides, detailed photography of histological sections was included. This contribution will be essential to understand the evolutionary history and morphology of the Miridae family in the Neotropical region and revel characters that can also allow the understanding and the study of Phylogeny, Taxonomy, physiological and behavioral aspects, as well as methods of controlling this pest. 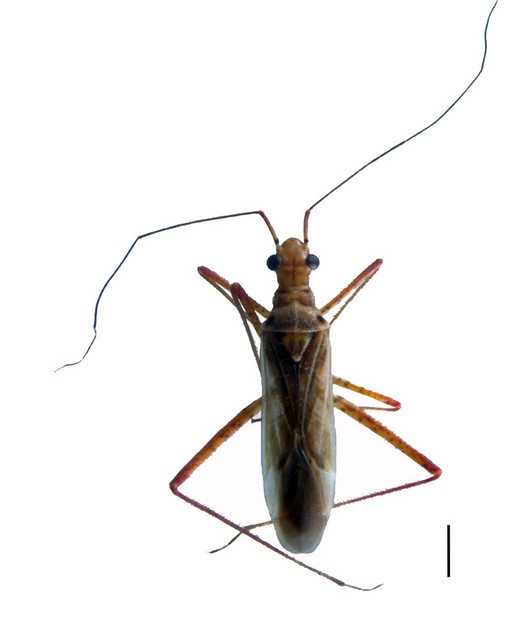 Figure 1. Collaria oleosa male (dorsal view). Scale 1 mm
MATERIALS AND METHODS
Fifteen sexually mature males of C. oleosa were collected in the campus of the Federal University of Viçosa, in Viçosa (20° 45′ 14″ S, 42° 52′ 55″ W 648 m), state of Minas Gerais, Brazil, in the pastures of Bermuda grass (Cynodon sp. (Poaceae)).
Reproductive system morphology
Adult males were cryoanesthetized and the reproductive system was dissected in 0.1 M sodium phosphate buffer at pH 7.2. After dissection, it was photographed with a stereoscopic microscope (Discovery V-20 Zeiss) coupled with an AxioCam MRc Zeiss camera (Zeiss, Goettingen, Germany). Length measurements of the structures were made with the software Image Pro-Plus version 4.5 (Media Cybernetics Inc., MD, USA).
Histological analysis
To obtain the histological sections, reproductive structures were fixed for twenty-four hours in 2.5% glutaraldehyde solution in 0.1 M phosphate buffer. The material was washed for two hours in the same phosphate buffer, post-fixed in 1% osmium tetroxide for two hours, and dehydrated in a series of ethanol solutions (30%, 50%, 70%, 90%, 100%). Reproductive structures were embedded in a mixture of historesin (Leica Historesin) and alcohol in a proportion of 1:1 and then immersed in pure historesin. Semithin sections (0.5 µm thick) were obtained using a microtome Leica RM 2155 with a glass knife, after that, they were transferred to histological slides, stained with Harris hematoxylin, eosin, toluidine blue and washed in running water for one minute. The observations and photographs were made using an Olympus BX-60 microscope. All the measurements were obtained with the software Image Pro-Plus, version 4.5.
RESULTS
Male reproductive system
The male reproductive system of the C. oleosa consists of a pair of testes, each one with two follicles. Each testis opens into a long vas deferens, which has the posterior extremity dilated, forming the seminal vesicle where the sperms are stored until mating. The seminal vesicles connect to the ejaculatory bulb, which is balloon-shaped (0.2 mm in diameter) and bounded to the accessory glands (Fig. 2A–D).

Figure 2. Overview of male reproductive system of Collaria oleosa. A­­–B, Diagram and light microscopy (× 40) (dorsal view); C–D, Diagram and light microscopy (× 40) (ventral view); testes (t); vas deferens (vd); anterior seminal vesicle (asv); posterior seminal vesicle (psv); external lateral gland (elg); internal lateral gland (ilg); ejaculatory bulb (eb). Scale, 0,5 mm
Morphology and Histology
The testes are elongated (~ 0.68 mm in length) x 0.26 mm in width). Each testis consists of two follicles and is surrounded by a testicular capsule with green pigmentation (Fig. 2B and D). The images obtained from histological sections show that the testes of C. oleosa are surrounded by a peritoneal membrane, and cysts have been found inside the follicles, from the apex to the base, with spermatogonia, spermatocytes, spermatids, and spermatozoa (Fig. 3A). The spermatogonia are located at the apical region of the follicle, and the cysts with spermatocytes and spermatids are distributed along the follicle (Fig. 3B and C). Subsequently, cysts with spermatozoa were found in the region posterior to the periphery of the follicle (Fig. 3D).

Figure 3. Longitudinal section of testis of Collaria oleosa showing cysts containing cells at different stages of spermatogenesis; A, Overview of testicular follicle; B, apical region with spermatogonia cysts (c1) and spermatocytes cysts (c2); C, middle region with spermatids cysts (c3); D, basal region with sperm cyst (c4). Peritoneal membrane (pm). Scales, A 30 µm B–C 20 µm; D 10 µm
The vasa deferentia are elongated (~ 0.96 mm in length) and form the seminal vesicles. These are divided by an asymmetric constriction in the anterior and posterior regions. The last one opens into the ejaculatory bulb. The vasa deferentia, especially in the vesicular region, exhibit a pearly white color due to the presence of spermatozoa (Fig. 2B and D). Histological analyses show that the seminal vesicles are surrounded by a single layer of epithelial cells. External to the epithelium is observed a well-developed muscle layer. The light of vesicular seminal is entirely filled by free spermatozoa, therefore, not disposed of in bundles (Fig. 4D).
The pair of external accessory glands are elongated with distinguishable ascending and descending arms, of a milky color. The internal accessory glands are shorter and are distinctly divided into two regions, the anterior and posterior regions. The anterior part is elongated and has the shape of a pear with a slight constriction that separates the posterior region. In essence, this last one is translucent, with a cylindrical shape (Fig. 2B and D). The walls of both gland types are lined by a single layer of columnar epithelium with at least two different cell types and externally enveloped by a thin muscle layer (Fig. 4A–C). The lumen of the external accessory gland has its secretion arranged inside of the spherical structures, whereas, in the internal accessory gland, the lumen has granular and irregular secretion (Fig. 4A­–C). 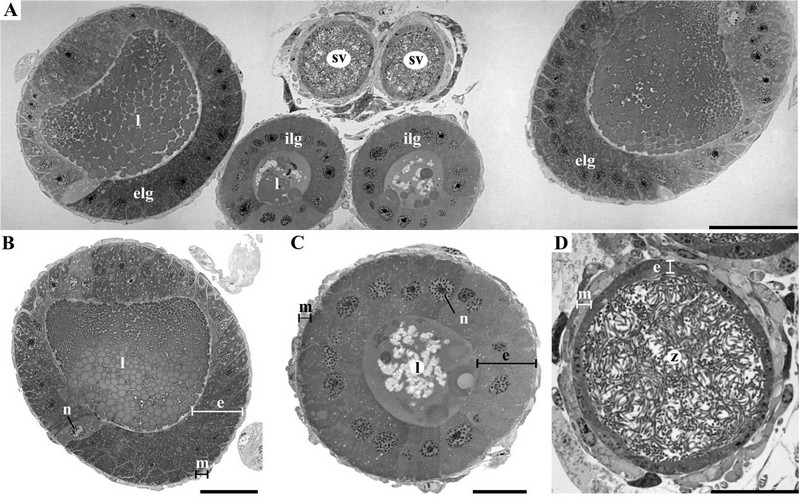