×
Go to content
REVISION/REVIEW
Previos / Index / Next
Unravelling the endometrium: a pictorial review of saline infusion sonohysterography in the evaluation of abnormal uterine bleeding.

Saika Amreen1, Naseer A2. Choh, Yawar Yaseen3, Cimona Lyn Saldanha4, Manjeet Singh5, Tariq A. Gojwari6, Feroze Shaheen7. Irfan Robbani8, Sheikh Riaz Rasool
Available from: http://dx.doi.org/10.21931/RB/2019.04.01.11
ABSTRACT
This article describes the diagnosis of causes of abnormal uterine bleeding with experience of the biggest medical institute in Kashmir, India. We work in a low resource setting where unavailabity of hysteroscopy made us acknowledge the accuracy and efficacy of saline infusion sonohysterography in diagnosis of patients with AUB thus helping guide their management.
INTRODUCTION

Abnormal uterine bleeding (AUB) is defined as an alteration in the volume, pattern, and duration of menstrual blood flow and is the most common reason for gynecologic referrals(1). In India, the prevalence of AUB is reported to be around 17.9%(2). Women with abnormal uterine bleeding have a considerably lower quality of life than the average population with a multitude of symptoms. (3)
The PALM-COEIN Classification System for causes of Abnormal Uterine Bleeding

In about 25% of patients, abnormal uterine bleeding is the result of a well defined organic abnormality(5)
For the initial assessment of possible gynecologic abnormalities, pelvic ultrasonography is most often used. (6) The introduction of saline infusion sonohysterography (SIS) has been a significant advance in the evaluation of the endometrial cavity. SIS provides an unparalleled, clear, enhanced view of the endo myometrial complex that cannot be obtained with transvaginal sonography (TVS) alone. (7) Sonohysterography is a technique in which the endometrial cavity is distended with saline, allows evaluation of the single layer of the endometrial lining and enables the radiologist to reliably distinguish focal from diffuse endometrial pathologic conditions.(8) SIS was first described in 1981 by Nannini et al.(9)
a. 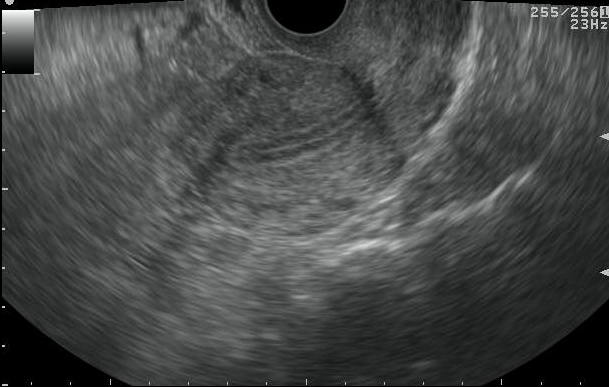 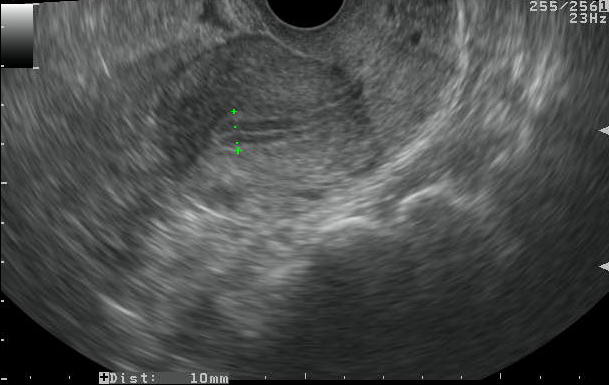 Figure 1.     a. Visualization of endometrium as a trilaminar echo on TVS.
b. Placement of electronic calipers for measurement of  endometrial thickness on TVS
TECHNIQUE OF SALINE INFUSION SONOHYSTEROGRAPHY
Performance of SIS after induced or natural menses minimizes confusion because at that time functions should be entirely shed, leaving only the basalis layer. (10) In premenopausal women, the best time to perform SIS is in the proliferative phase (first half) of the menstrual cycle. In postmenopausal women taking HRT, the SIS should be scheduled approximately six days after the last progestin pill when the endometrium is thinnest. (11) The baseline ultrasound study (transabdominal and transvaginal) is performed first.(10) A speculum is used to allow visualization of the cervix. After cleansing the external os, the cervical canal is catheterized using aseptic technique, and normal saline is instilled slowly using manual injection under real-time sonographic imaging into the endometrial cavity. (12) The saline distends the cavity, pushing the opposed walls of the endometrium apart. The anechoic fluid is then juxtaposed against the echogenic endometrium, giving exquisite detail of the uterine lining. (13)
a 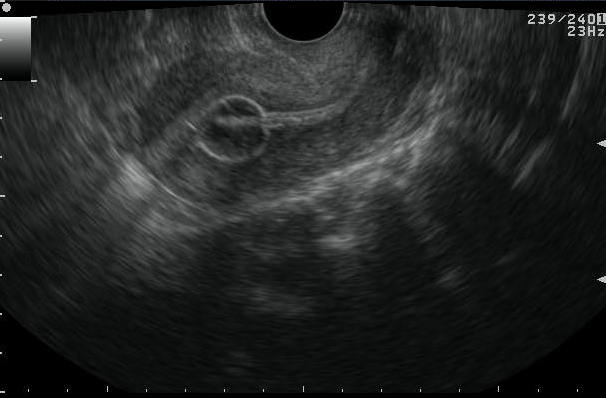 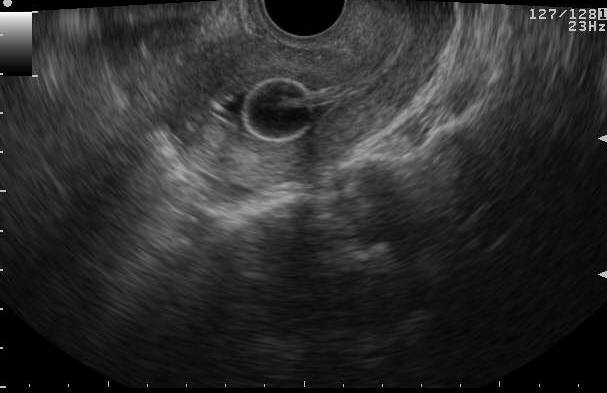 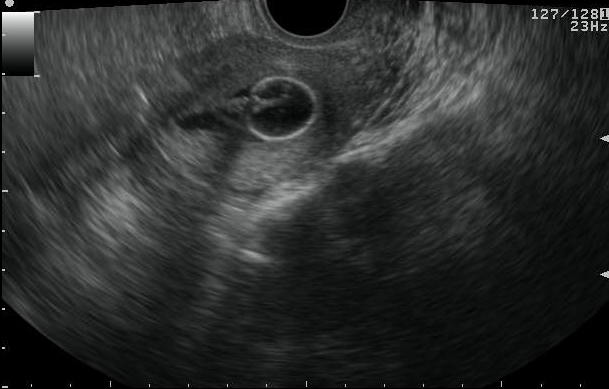 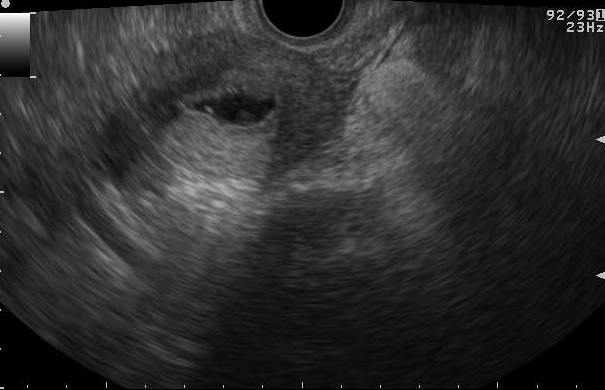 a.       TVS image revealing catheter in situ with bulb inflated with saline

b.       Saline infusion is started and begins filling the endometrial cavity

EVALUATION OF ENDOMETRIUM
Endometrial thickness should be measured on a sagittal (long-axis) image of the uterus, and the measurement should be performed on the thickest portion of the endometrium, excluding the hypoechoic inner myometrium. It is a ‘‘double-thickness’’ measurement from basalis to basalis.(11) If the fluid is seen within the endometrial cavity, the individual wall thicknesses of the 2 sides of the endometrium are summed, excluding the intervening fluid.(13) This central quality assurance reading provides a consistent evaluation of endometrial thickness on US image.(14)
THE NORMAL ENDOMETRIUM
Normal endometrium should be uniform in thickness, homogeneous in echotexture, and not displaced by any submucosal, myometrial abnormality.(8) A thin endometrium of 5 mm or less had a high negative predictive value.(13) In premenopausal patients, a thickness greater than 8mm during proliferative phase or more excellent than 16mm during the secretory phase is considered abnormal. (15)
P - ENDOMETRIAL POLYPS
Endometrial polyps are a common gynecologic condition associated with symptoms of AUB. They account for 39% and 21% to 28% of pre- and postmenopausal women, respectively(1).
Endometrial polyps may be visualized at transvaginal ultrasound as nonspecific endometrial thickening (16).  Preservation of the endometrial-myometrial interface and echogenic appearance have been described as features of a typical polyp. (8) Some of the atypical features of polyps include cystic components, multiplicity, a broad base, and hypoechogenicity or heterogeneity that may indicate hemorrhage, infarction, or inflammation within the polyp. A small percentage of endometrial polyps may contain malignant foci or foci of endometrial hyperplasia. (17)(17)
Addition of Color Doppler to sonohysterography may help distinguish an endometrial polyp, which usually has a single feeding vessel – the pedicle artery, from an intracavitary submucosal fibroid, which usually has several vessels arising from the inner myometrium. (18)
a 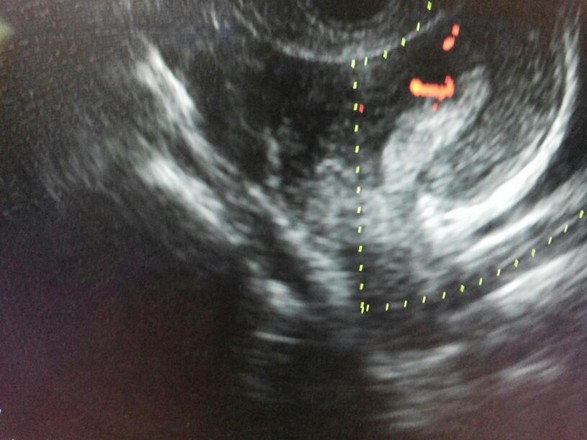 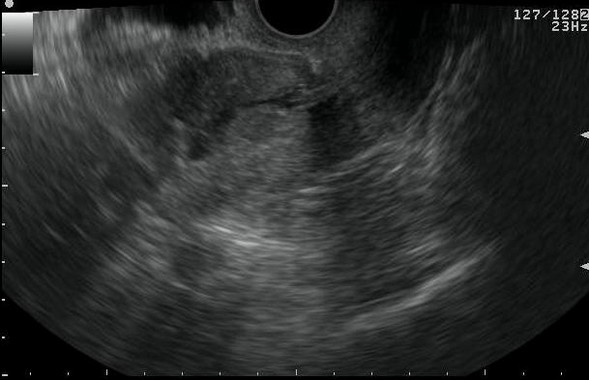 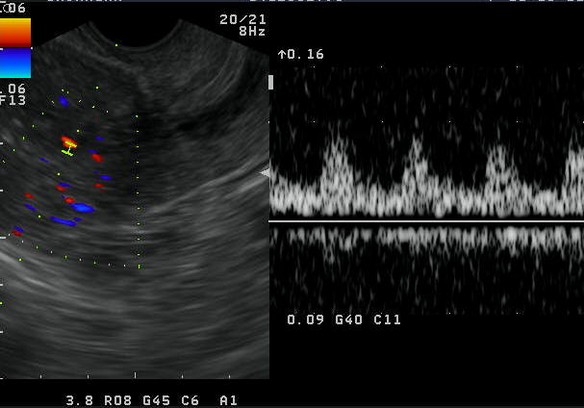 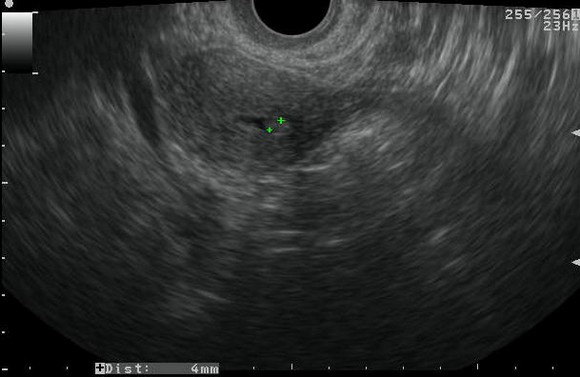 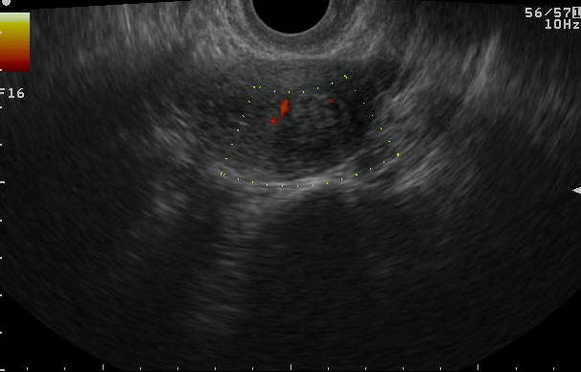 b.      Demonstration of the pedicle artery by color doppler examination

c.       Another patient with SIS revealing an echogenic polyp within the endometrial cavity

d.       Arterial waveform obtained from pedicle artery of the above endometrial polyp

e.       A very small endometrial polyp identified by SIS in a patient with metrorrhagia with otherwise normal imaging

f.        Identification of pedicle artery by power doppler in the same patient

Adenomyosis is a common benign disease of the uterus characterized by ectopic endometrial glands and stroma within the myometrium associated with surrounding smooth-muscle hypertrophy(19). Approximately 70% of patients with adenomyosis have symptoms of AUB; 30% have symptoms of dysmenorrhea; and 19% present with both(1). Diffuse globular uterine enlargement is a common sonographic manifestation of adenomyosis(17).
The reported frequency of adenomyosis varies widely, ranging from 5 to 70% (20). The most common sonographic finding in adenomyosis on SIS is asymmetric myometrial thickening and heterogeneous echotexture. The second most common findings include myometrial cracks and myometrial cysts followed by an indistinct endo-myometrial junction(19).
a 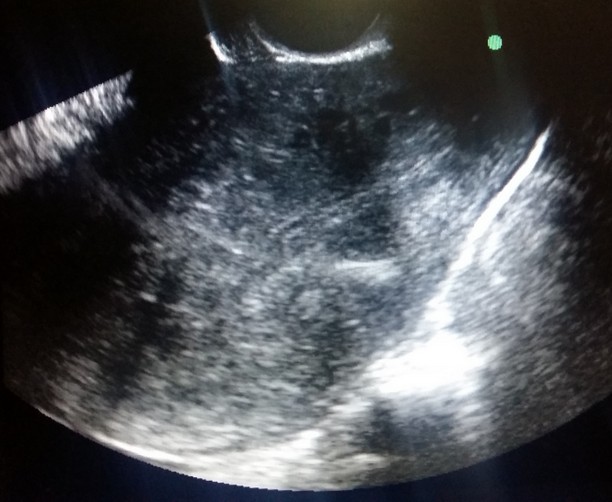 b.      Another patient with thick EMJ and multiple myometrial cysts with SIS showing normal endometrium with diagnosis of adenomyosis

L - LEIOMYOMAS
Uterine fibroids are the most common benign tumor of the female genital tract(1). The PALM-COEIN system adds categorization of intramural and subserosal myomas as well as a category that includes lesions (‘‘parasitic’’) that appear to be detached from the uterus(4). Submucous myomas are most likely to cause menorrhagia(21).
Fibroids are commonly identified at US as hypoechoic solid masses, but they may be heterogeneous or hyperechoic, depending on the degree of degeneration and calcification. Fibroids tend not to interrupt the endometrium unless they are submucosal in location. Submucosal fibroids may distort the uterine cavity with varying degrees of intracavitary extension and are best visualized at sonohysterography(16). The addition of SIS not only shows hypoechoic, smooth rounded masses with an overlying echogenic endometrium and some degree of acoustic shadowing, but also clearly demonstrates the wall of origin, the exact localization (intramural or submucosal), and the extension into the uterine cavity (22). This feature is important because only those fibroids in which at least 50% of the mass projects into the endometrial cavity may be removed hysteroscopically.(23)
Differentiation of endometrial polyp from submucosal fibroid at sonohysterography is most effectively done by echotexture assessment and identification of an overlying echogenic endometrium. The classic submucosal fibroid is hypoechoic with shadowing and similar in texture to the myometrium with an overlying echogenic endometrium defining the subendometrial location. Because a submucosal fibroid may present almost entirely within the endometrial cavity as does a polyp, location is not a reliable distinguishing feature. (9)
a 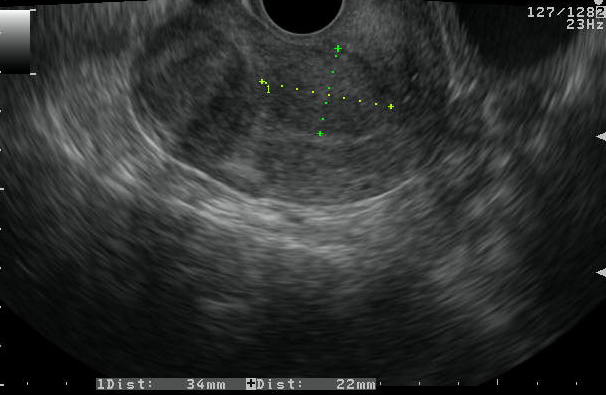 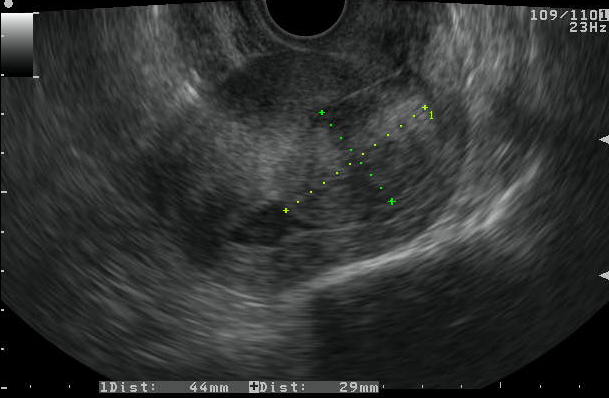 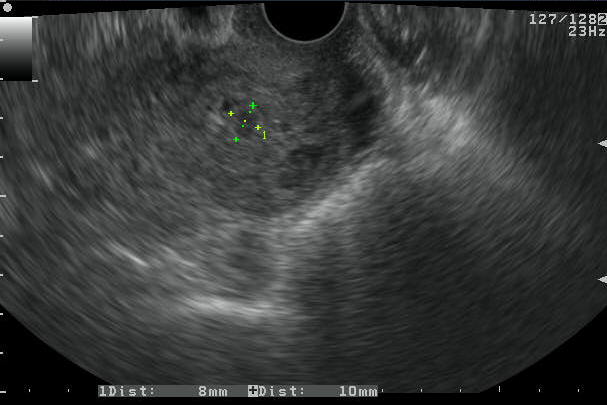 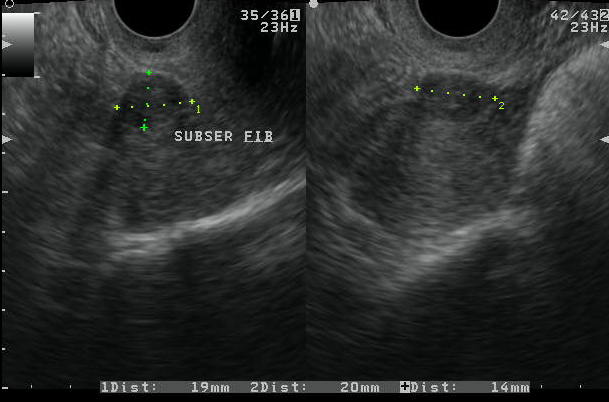 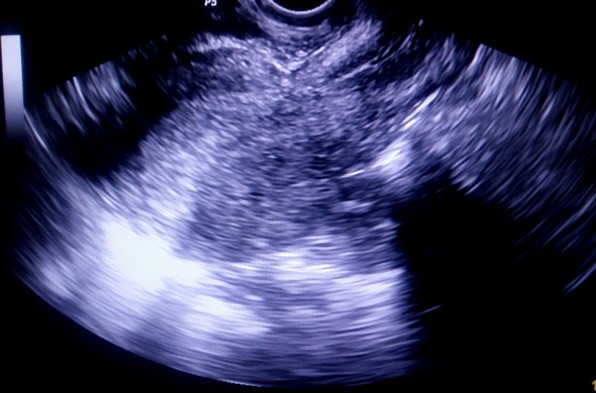 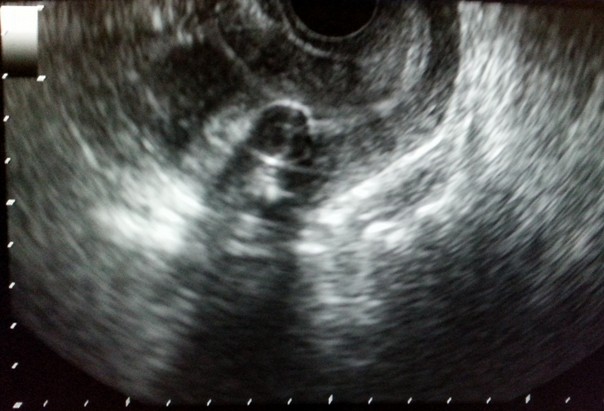 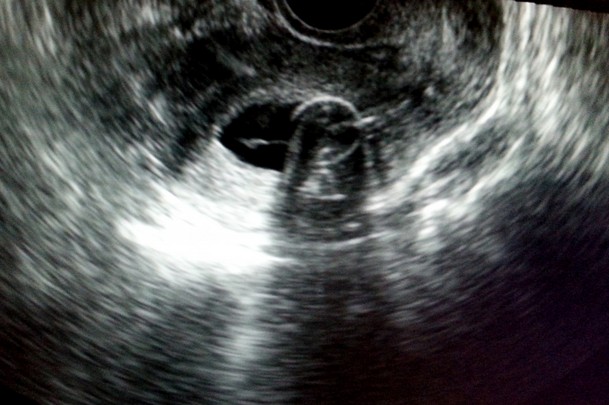 SIGNIFICANCE
Initially, curettage was the ‘‘gold standard’’ for assessment of endometrium. First described in 1843, its performance in the hospital became the most common operation performed on women in the world. As early as the 1950s, a review of 6907 curettage procedures found the technique missed endometrial lesions in 10% of cases. Of these, 80% were polyps. (11)
Hysteroscopic evaluation for abnormal uterine bleeding is an option providing direct visualization of cavitary pathology and facilitating directed biopsy. (24) It is both sensitive and specific but is generally performed in an operating room under anesthesia, and requires specialized and highly skilled personnel, which increases the risks and costs. (28)
A saline hysterosonogram depicting focal abnormalities such as endometrial polyps or submucosal leiomyomas can guide the hysteroscopic resection of these masses. A saline hysterosonogram depicting myomas in a solely intramural location may be used to determine that an abdominal myomectomy is the optimal surgical approach for their resection. A saline hysterosonogram with specific negative findings can be extremely informative and obviate unnecessary procedures, and distinguish women who require medical therapy and investigation from those who require surgery. A normal endometrium on saline hystero sonography combined with a regular uterine appearance will direct the clinician to search for causes of vaginal bleeding other than anatomic causes, such as ovulatory versus anovulatory dysfunctional uterine bleeding or systemic disease. (25)
Safety and short-term effectiveness of hysteroscopy are now accepted for lesions limited to the uterine cavity. Submucous myomas up to 30 mm diameter and polyps can be resected endoscopically, allowing short hospital stay and quick recovery. (29) SIS on comparison outpatient diagnostic hysteroscopy is both less invasive to the patient and less expensive.(30) An approach using endometrial thickness measurement by TVS and reserving SIS for patients who have an endometrial thickness greater than 5 mm or an intracavitary abnormality visualized by TVS would be the effect to reduce the number of hysteroscopies.(31)